– No, that’s not a typo. If you’ve read our vintage Best and Worst of WWF Monday Night Raw columns up until now, you know we started at the very beginning, in 1993. Well, I realized that nothing happens between 1993 and like, 1997, so I decided to jump ahead three years and coordinate the retro Raw and WCW Monday Nitro reports. Now when one show references the other, you’ll have some context for it. I apologize if you really wanted to read about three straight years of Tatanka matches.

– Click here to watch this week’s episode on WWE Network. You can read about previous episodes on the Best and Worst of WWF Monday Night Raw tag page.

Worst: Whoops, We Aren’t Quite In The Attitude Era Yet

So we’ve jumped forward three years and found ourself in the spring of 1996, probably the worst and most awkward non-murder-related time in wrestling history. Over in WCW, Hulk Hogan is running amuck and has just had a match so impossibly bad it ended Hulkamania. Scott Hall’s still about a month away from showing up on Nitro and lighting a fire under the industry’s ass, so we’re stuck in a holding pattern where nothing matters and everyone’s expecting the industry to fold.

The big angle on Raw this week is fallout from IN YOUR HOUSE: GOOD FRIENDS BETTER ENEMIES, a pay-per-view named like it’s a direct-to-DVD teen horror movie. Owen Hart and The British Bulldog — not “Owen Hart and Yokozuna” good, but close — were wrestling Jake ‘The Snake’ Roberts and Ahmed Johnson. Imagine a Budweiser in a big red koozie. During the match, Bulldog’s wife Diana gets up and leaves. According to that camp, Diana wandered backstage and was forced into a dark corner and propositioned for sex by WWF Champion Shawn Michaels.

That issue leads to an in-ring confrontation between Michaels and Jim Cornette, who screams at him for like five minutes for being a “fornicator,” which is either the least or most “attitude era” thing I can imagine. He also says Shawn tried to “ruin” Diana by having sex with her, because in 1996 everything that’s concerning was totally normal. We were using the internet for slow downloads of sketchy Jenny McCarthy nudes and Metallica waves, not outrage. Shawn’s response is that Diana shouldn’t flatter herself, which leads to Diana AND the Bulldog attacking him. Yes, in the spring of 1996, the big followup to “I defeated the champion in an iron man match at WrestleMania” and “I had to fight my former best friend in a street fight” was “this insecure man-dog thinks I want to hump his dowdy Canadian wife.”

Best/Worst: Bart Gunn Gets His Period

One of the strangest things about this era of WWE is that they hadn’t decided which guys were their next big stars, so you’ll watch an episode and see Mankind and Stone Cold Steve Austin as midcarders struggling against Bart Gunn and Savio Vega. It’s a lot like when you watch Raw now and see Kofi Kingston beating Cesaro, except you know it ends well for the guys you like, and Savio Vega didn’t get a renewed, half-assed push every year and a half.

Anyway, the first match of the show is Mankind in his original WWE form against Bart Gunn, who has been forced into a singles career because Billy Gunn is injured and one incestuous cowboy guy is as good as two. Bart kinda beats Mankind’s ass, which you wouldn’t expect. If you’re like me, your only recallable Bart Gunn memory is his foxy boxing match with Butterbean and him turning into a bobblehead on his way to the ground. Mankind starts bleeding from the eye for no apparent reason and it gets on Bart’s jeans, and poor Bart spends most of the match looking like he got his period.

Early Mankind’s great, though, because he’s an actual character and not a costume Mick Foley wears to be precious. He’s tortured in a very different way for a WWE character, and when he realizes he’s bleeding from the eye he starts smashing his head into the security railing to make it worse. That’s one of the best things about Mankind: the idea that mild pain causes him anxiety, so he has to make it way, way worse to “numb” it and move forward. It’s why he stabs himself in the knee in that Mind Games match with Shawn Michaels. He’d rather be destroyed than annoyed. He beats Bart Gunn by putting his fingers in his mouth, but at least in ’96 it’s portrayed as a deadly nerve hold and not “how funny is it that you’re eating my laundry.”

Best: If You Want To See Me Open Up A Can Of Time Warped Whoop-Ass On Scotty 2 Hotty Gimme A Hell Yeah

The next match is a guy you might’ve heard of — Scott Taylor — taking on, uh, Stone Cold Steve Austin. This episode aired on April 29, 1996. On June 23rd, Austin would win the King of the Ring and say something about Bibles and change his career trajectory forever. His popularity would help make the show successful enough that even dorks like Scott Taylor could slide into a pair of JNCOs and give themselves Dragon Ball hair and sell out Madison Square Garden.

Here, Austin is a lonely midcarder in a feud with Savio Vega, who sits at ringside with a strap because they’re gonna have a strap match. Jerry Lawler is full of youth and piss (however that saying goes) and free from Internet rage, so he buries Vega the entire time and calls him “burrito breath.” Sometimes I wish old man Jerry Lawler would just channel this version and piss everybody off on purpose, instead of being a doddering old weirdo doing it by accident. Instead of staring at AJ Lee’s ass, just call her chimichanga tits and own it, you know? If you’re gonna be regressive and cruel, at least have the BONER BALLS~ to do it with spirit.

Austin beats Taylor with the Million Dollar Dream, which feels SO WRONG. It’s like Shawn Michaels beating people with the Teardrop Suplex instead of Sweet Chin Music. Imagine if, say, Seth Rollins stopped using the Curb Stomp for some reason and started beating people with a bad DDT. It’d be that kind of wrong.

After the match, Savio challenges Austin to a strap match and Austin says no, so Savio jumps in the ring and attacks him with a strap. Now it HAS to happen, because WWE babyfaces.

Next week’s Raw features The Undertaker vs. Owen Hart with Goldust on color commentary, and that feels like it should be the greatest thing in the world but I don’t really remember it, which means it … probably isn’t. Regardless, the highlight of this week’s episode is the preview, which accidentally happens on top of the Godwinns entrance and leaves us that picture of Goldie with this playing in the background. It’s a jarring contrast, and also totally appropriate.

Worst Ever: The New Rockers

Up next is a tag team match where the winning team gets a shot at the current tag team champions, The Bodydonnas. If you don’t remember the Bodydonnas, they were Physical Fitness Guys. I love that in 1996 WWF you can describe any wrestler that quickly. “Wrestling Garbage Man.” “Wrestling Hockey Player.” “Gay Oscar Statue.”

The Godwinns were “slightly updated hillbillies.” Instead of being shirtless and wearing overalls, they wore shirts and overalls. Real technical stuff here. They were more “working class” than “hillbillies,” but WWE never really new the difference so they had them bring farm animals to the ring and gave them initials that spelled “hog” and “pig.” They’re up against The New Rockers, and if you ever needed an explanation of why good members of a broken up tag team are called the “Shawn” and failed, forgotten members are called the “Marty,” watch this episode of Raw. Shawn Michaels is the WWF Champion and just won a 60+ minute main-event at WrestleMania. Marty Jannetty is wearing flower-print boots and teaming up with Al Snow to wrestle a couple of pig-f*ckers.

The worst part (and the worst thing ever) is the opening of the match. The Godwinns have brought ADORABLE BABY PIGS to the ring, and the New Rockers try to stomp them. They try to stomp baby pigs. If you weren’t already 30 kinds of dead to me, New Rockers, you would be dead to me. Remember a few hundred episodes later when Big Bossman kidnaps Al Snow’s dog and cooks and feeds it to him? It’s karmic balance for the pig-stomping. 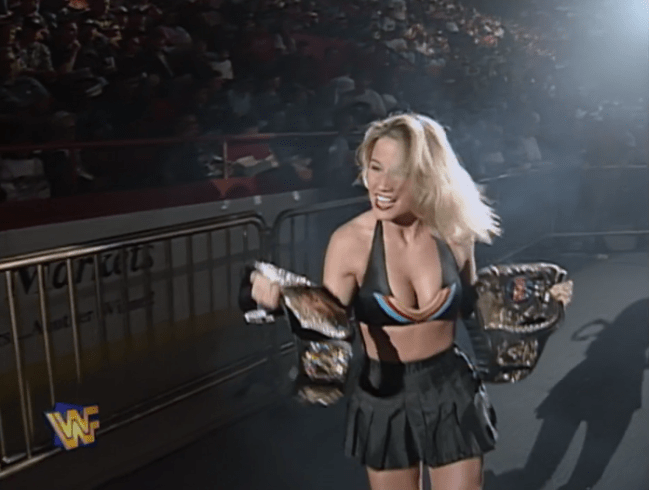 Before she was super concerning, Sunny was the hottest woman in wrestling. I don’t even care. She was great on the mic, had great ring awareness as a manager, was great at playing a character and was goddamn gorgeous without ever being WWE’s hacky interpretation of “gorgeous,” i.e. that Sable thing where you look like a Sex Mannequin. Those are a thing, right? For most of the 90s, WWE only thought you were pretty if you looked like a character Billy and Jimmy Lee would beat up in Double Dragon. Sunny didn’t feel like a centerfold, she felt alive. She wasn’t a vague fantasy girl, she was the woman who’d show up and manic pixie the hell out of your life and leave you f*cking staggered.

She’s smart, too. The character, at least. The New Rockers and the Godwinns are having this match to get a shot at the tag team championships, and she’s the manager of the current tag team champions. She shows up late in the match and starts messing with everybody, causes a double-DQ and bam, her team doesn’t have to wrestle ANYBODY. The announce team says she’s “using her assets,” but it’s more than that. She’s keeping the tag team championships in her possession by paying attention to how wrestling works and manipulating it.

Okay, for part of life.

Worst: Yes, I Am A Wrestling Dentist, Why Do You Ask

“I’m here to do what’s best for business. The dentistry business! F*ck my life.”

As a constant reminder, the worst thing WWE does besides pronounce “versus” as “varse” and “veteran” as “vennern” is pronounce “warrior” as “woyer.” WOYER NOW OFF THE BUCKLE! WWE seems terrified of sounding “too southern,” but has never had a problem sounding like the most Delaware motherf*ckers in the world. They should look in the meer and realize their mistake.

This is Woyer’s first Raw match of his latest return, which included a squash of Triple H at WrestleMania and a count-out win over Goldust at In Your House. The weird thing about Warrior’s ’96 run is that almost every match he had ended in DQ or count-out, like they couldn’t commit to putting him over strong or burying him. They were just like, “well, he’s HERE, LOOK AT HIM!” That could explain why he only lasts a few months, and why his strongest Raw win is over a damn wrestling dentist. Still, though, there’s a lot of effort put into LOOK AT HIM, so … uh, look at him. THE AAAAAALTIMENT WOYER!