The Best And Worst Of WWF Monday Night RAW 4/5/93: The Return Of The King

– Click here to watch this week’s episode on WWE Network. You can read about previous episodes on the Best and Worst of RAW tag page.

– Apologies on the lateness of the report. These usually go up on Mondays, but on Sunday I kinda got pushed around and banged up by a crazy person and couldn’t really put a sentence together. The Nitro report will be available as expected this afternoon.

– Click this share button! It’s hard to promote content based on 20+ year old wrestling shows, so a click of that button will keep me in the business of making jokes about Jim Powers’ face.

Please click through for the Best and Worst of WWF Monday Night RAW for April 5, 1993.

Best: Rob Bartlett Isn’t Here And The Announce Team Can’t Stop Talking About How Happy They Are

When the show opens, Vince McMahon and Macho Man Randy Savage are your announce team and Rob Bartlett’s nowhere to be found. As the episode progresses, they start creating a seemingly improvised bit about how Bartlett got stuck in Las Vegas over WrestleMania weekend and lost all his money, so now he’s a penniless vagrant scavenging for food or something and trying to hitch a bus back to New York. He’s apparently starving to death and about to die and they’re just cracking jokes about how he sucks at roulette. WWE babyfaces have always been f*cking heartless.

Of course, there is amazing humor in Rob Bartlett dying in a gutter while laughing hookers walk by and dump their fast food wrappers on him without noticing he’s there. There’s a payoff a little later where Rob calls in and basically begs them to bail him out, and they’re just like SORRY ROB, CAN’T HEAR YOU, MUST BE A BAD CONNECTION. Next time WWE goes to Las Vegas, they should cut to one of those “here’s the city we’re in” shots, and in the bottom right corner there’s a skeleton in round sunglasses clutching a Greyhound ticket.

Usually, when a pay-per-view prefaces a vintage Best and Worst report (such as the Best and Worst of Nitro), I’ll include a one-page write-up to catch you up on important happenings and pertinent plot points. WrestleMania IX has just happened, and I have good news and bad news.

The bad news is that it’s one of the two or three worst WrestleManias of all time. The good news is that literally nothing that happened at Mania affects this episode of RAW (because “1993 WWF,” and also because this was technically taped BEFORE Mania), so I’m abridging my one-pager into a list of bullet points. Here’s what you need to know about WrestleMania IX:

The funniest part of this episode is everyone insisting that WrestleMania IX will OBVIOUSLY go down as the greatest sporting event of all time. Like, you think they’d have seen that show and stuck with, “it was a SPECTACLE! YOU DON’T WANNA MISS IT!” but nope, going straight for “nothing we’ve done or will ever do will be as great as Macho Man being carried to the ring by slaves.”

Bam Bam Bigelow is a 400-pound biker who can do moonsaults and cartwheels and wears a FLAME BODYSUIT and has FLAMES SHOOT TATTOOED ON HIS SCALP. On paper, he is deadly enough to beat most wrestlers in real life. I want to make sure you understand what I’m trying to type there. I’m saying you could write “BAM BAM BIGELOW” on a piece of paper and hand it to, say, Repo Man, and Repo Man should immediately fall down and not be able to stand until the paper’s removed.

He opens this week’s show against Virgil, former manservant of the Million Dollar Man, seen here wearing bed sheets from Target around his legs for gear. Usually, he looks like a sh*tty candy cane. Virgil is about as a threatening as a newborn puppy and has always as much coordination, so he spends the match kinda awkwardly hopping in place and throwing bad Road Dogg jabs because in WWF, being black means you’re a “great natural athlete.” To say Virgil’s a great natural athlete is to say Jim Ross is a champion Olympic ski jumper. From Kenya.

Bam Bam should roll the hell over Virgil but doesn’t, because wrestling for the sake of wrestling. Eventually he puts him away with a flying headbutt but it takes about nine minutes. In case you were wondering, nine minutes is how long it takes a wrestling blogger in 2015 to go “oooh, Bigelow was supposed to be feuding with Kamala, but it got cut from Mania, so they paired him up with the other black guy.” 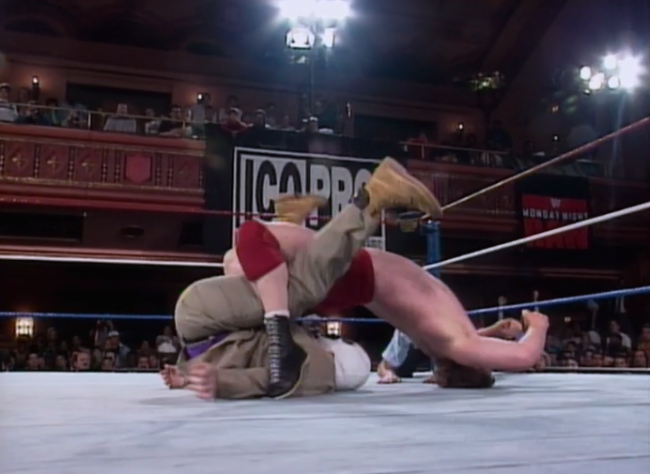 The trend of putting Bob Backlund in the ring against 1993 WWF’s most ridiculous characters is one of my favorite parts of these early RAWs. On last week’s episode Bob pinned an evil, magical voodoo priest with an inside cradle. This week he uses a bridging pin to defeat Kim Chee, a poacher who also captures and trades slaves. Yes, these are actual wrestling characters. At WrestleMania IX he lost to aggressive Wrestling Scarface. Next week he wrestles a clown.

I wish they’d bring this back in 2015. Backlund can still do his thing. Get him in the ring against The Ascension. Let him wrestle Fandango for five minutes and tap him out to a spinning toe-hold. Let him work El Torito. Read that sentence and tell me to my mother f*cking face that 65-year old Bob Backlund vs. El Torito wouldn’t be a match of the year candidate.

Worst: The Last Match You’d Ever Imagine Spending 7 Minutes Of Your Life Watching

Remember earlier when I mentioned Rob Bartlett calling in and sobbing about how he was going to die for real if Vince didn’t send help and Vince just kinda chuckling and hanging up? They need something happening in the background of that, so they run Damien Demento vs. Jumpin’ Jim Brunzell. You have never wanted to see a match less, I swear to God.

If you don’t know Brunzell, he’s the Killer Bee the Iron Sheik DOESN’T want to f*ck in the ass and make humble. If you’re a regular reader of the column you’ve seen Damien Demento a few times already, but I bet you don’t know anything about him beyond “I think he’s supposed to have brain damage” and “he looks like a venus fly trap.” Here’s how boring this is: Demento wins with a knee drop. Not a running knee drop with theatrics, not a knee drop from the top rope. A knee drop. From a standing position.

Best/Worst: The Steiner Brothers vs. The Beverly Brothers

I’ve probably written about this before, but the Steiners just didn’t work in WWF. It didn’t make sense. When they were in WCW they were getting paired against teams that could hang with them and deliver just as much damage, so you’d get these killer hoss tag matches full of suplexes and head-drops and brutal everythings. Doom, the Skyscrapers, the Road Warriors, Sting and Lex Luger, Steve Williams and Terry Gordy, whoever. When they went to Japan, same story.

In the WWF, they had nobody. They got a few good opponents — the Harts, the Headshrinkers — but they were mostly stuck pumping their fists and throwing suplexes on folks like the Beverly Brothers, who you are only remembering as awesome if you grew up without any actual good wrestling. WWF took a team of tough guys from the AWA, dyed their hair blonde, gave them purple sparkly capes and made them spoiled brats from Ohio. You know, that classic trope about bleach blonde entitled Ohioans in flamboyant jumpsuits. They had an accidentally life-threatening finish, but aside from that their job was to bore you until the Bushwhackers seemed like a good idea.

Seriously, who were the Steiners supposed to face? What’re they supposed to do against the damn Bushwhackers? Is Cousin Butch gonna take a top rope tiger suplex?

Vince McMahon’s call is one of the most accurate of his career: “The King Jerry Lawler, allegedly one of the great wrestlers of our time!”

Lawler had been a broadcaster for WWF for a bit, but this was his return to the ring and his RAW debut. Keep in mind that by 2015, this guy’d been on more RAWs than almost anybody, and he had lived out a huge chunk of his life in front of our eyes and ears. There are more than 20 WrestleManias between this and now, most of them called by The King. He’s wrestled, called matches, emceed bikini contests, emceed ADDITIONAL bikini contests, spent a decade coming up with animal names for female body parts, gotten old, gotten tired, switched out partners in life and behind the announce table, introduced wives as characters, shilled everything from Burger King to Sonic, pretended to love every special guest, challenged for the WWE Championship, made it onto WrestleMania as a performer only to lose to an announcer with no wrestling history and FOR REAL DIED AND BEEN REVIVED. Adults have been born, lived and died between Jerry Lawler’s RAW debut and the time he got shuffled over to SmackDown and replaced by Booker T. Isn’t that weird?

Anyway, 1993 Lawler rules. He’s too old to be taken seriously as a main-even competitor, and he’s out of his natural habitat, but he’s still young enough to go and hit all the right heel buttons. The Attitude Era hasn’t turned him into a pervert yet, so he’s just this cocky, Beaver Cleaver-looking guy in a crown and a caveman singlet telling a crowd that if they don’t stop chanting “Burger King” at him, he’s GONNA LEAVE. They don’t, and he DOES. It’s the first thing to ever feel like old, visceral pro wrestling in RAW’s young life, and something that 1,100 episodes in the show hasn’t gotten enough of.

Lawler is supposed to wrestle in the middle of the show but bails, so they have to push his match back to the end. It’s so good. Plus, he wrestles this guy:

Look at that guy. That’s former Young Stallion JIM POWERS, who got in shape using his GYM PROWESS. His face constantly looks like he’s seeing someone getting eaten in Troll 2.

Lawler not only piledrivers and pins him, he adds insult to injury by utilizing the great and oddly-specific 1993 WWF masterstroke, the front wedgie:

I’ve never seen anybody get leverage from the crotch of somebody’s trunks, but I’ve seen it twice in like 10 episodes of RAW. What’s going on, guys?

The show ends with The King throwing shade at the audience for being terrible athletes and calling out Macho Man Randy Savage. To recap, Jerry Lawler debuts on RAW, f*cks with the crowd, leaves, comes back, pins shocked-ass Jim Powers with a spinal contusion and a testicular exam and waves it in Savage’s face.

So, uh, how do we get this Jerry Lawler BACK on RAW?