The Important, Comprehensive History Of ‘Whoomp! (There It Is)’ In Professional Wrestling 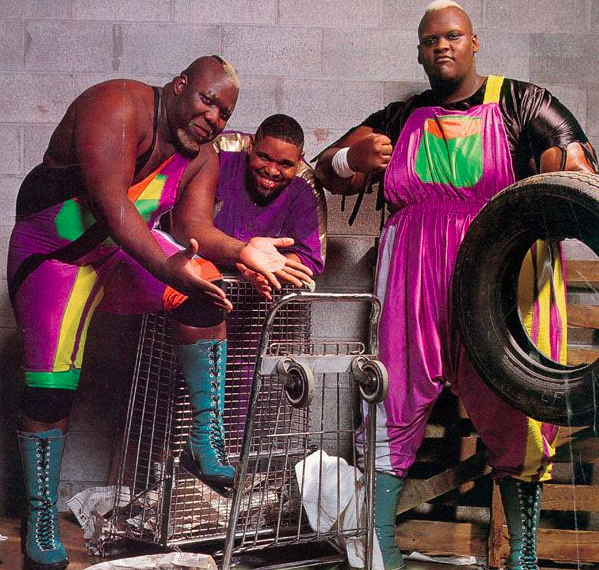 Last month, R-Truth entered the Royal Rumble to his usual incoherent, off-beat rendition of his theme song, “What’s Up.” This time, however, he added a new wrinkle to the end of the song: “Whoomp! (There It Is).” While it may have seemed like a one-off, random bit of nostalgia, it’s quite possible that R-Truth was paying homage to a time-honored wrestling chant that’s more than 20 years old.

The song: Miami bass music was popularized on the national scene by rap group 2 Live Crew, who made high-octane fast-paced ass-shaking music that your mom got pregnant to in the very early ’90s. By 1993, there would be one or two nationally recognized Miami bass songs that would take over the radio stations. One year, it would be “Tootsee Roll,” another year, it would be “Butterfly” and another year, it would be “Space Jam.” In 1993, the song was “Whoomp! (There It Is)” by Tag Team. The phrase became a pop culture canon in the same way that letting the dogs out or raising the roof were. The phrase was a punchline on every TGIF show at one point or another.

And eventually, it made its way to even professional wrestling.

The Summer of 1993: Men on a Mission was a wrestling/rap group that featured Mo, Mabel and their manager Oscar (or Oscah, as Vince McMahon called him). They debuted as part of a rap trio gimmick in July of 1993. Oscar would rap Mable and Mo to the ring with the standard instructions to throw your hands in the air and wave them as if you just don’t care. It was standard ’90s black gimmick fare, but it wasn’t, like, wildly racist. They were actually trying to be positive, uplifting rappers in the vein of De La Soul or something. For their first few appearances on RAW, M.O.M. stayed relatively standard, with Oscar clearly freestyling his raps and the team beating up jobbers.

So, where does “Whoomp! (There It Is)” start? The first time I can spot the phrase on WWE Network is on the 37th episode of RAW. And the first person to say it: Bobby “The Brain” Heenan. As the team made their way to the ring, Brain said, “Whoopsie, there they are,” to heel it up and make fun of the group. McMahon then corrected him with, “It’s ‘Whoomp! (There It Is).'”

The thing is, I never heard M.O.M. use the phrase on RAW before this moment. Then, on the November 7 episode just two weeks later, Oscar comes out with a “Whoomp! (There It Is)” chant to get the crowd into it. Look at how happy they are. 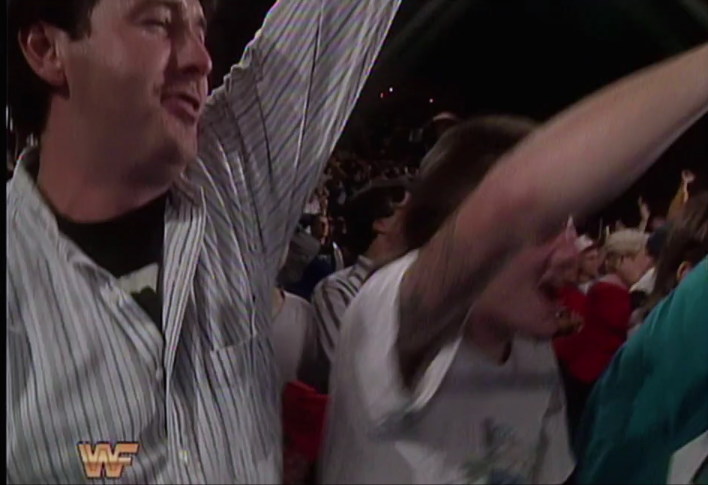 To the best of my knowledge, this is the birth of the phrase in wrestling. I don’t know if Vince had the idea to make that phrase a wrestling thing and demanded that M.O.M. use it, but Heenan making jokes about the phrase is the perfect example of why he’s light-years ahead of the current broadcasters. Brain made fun of a silly phrase in a way that makes him look out of touch. By proxy, knowing about the phrase makes the fan more cool and connected to the babyfaces. It’s a nuance that JBL just doesn’t get, but I digress.

“Whoomp! (There It Is)” followed Men on a Mission and, subsequently Mable, through the early part of 1994. No wonder he turned heel. But that wouldn’t be the only time we’ve heard the phrase in wrestling. WCW crowds chanted “Whoomp! (There It Is),” and the person they cheered it to made zero sense.

Battlebowl: Sting and Jerry Saggs vs. Ron Simmons and Keith Cole: The premise of Battlebowl was tag teams being picked at random to compete in matches. Then, the winning tag teams go into an everyone for himself battle royal. The winner gets a ring. A Battlebowl ring. Like a Super Bowl ring. But cheaper and less relevant. The idea wasn’t necessarily bad, but the execution was horrible. Most matches were bad, and the dynamic was redundant.

Fast-forward to the actual Battlebowl match, and the last three men are Sting, Vader and Stunning Steve Austin. Naturally the heels piled up on Sting, and the “Whoomp! (There It Is)” chant was goddamn thunderous.

Look at this picture. Look at the lady there in mid fist rotation, chanting with her soul. Then, there’s the best thing I think I may have ever heard on commentary: “And the crowd chants… ‘Whoomp! (There It Is).'” said Jesse “The 9/11 Doubting Former Governor Body” Ventura. Everyone should be a wrestling fan.

Battlebowl took place just two weeks after M.O.M. debuted the song on national television on November 7, and it appears that the chant had migrated to WCW by November 20. Somehow, the chant went from a mid-card WWF act to WCW’s biggest babyface. I have no clue how that happened.

I watched Sting and Davey Boy Smith vs. The Nasty Boys at Clash of the Champions just a couple of weeks before Battlebowl, then Sting and Road Warrior Hawk vs. The Nasty Boys at Starrcade ’93 a month after Battlebowl, and neither of these matches featured the “Whoomp! (There It Is)” chant. I don’t know how it started in WCW and got to Sting. It was just there for one night, then it died. It’s a mystery I may never get to the bottom of, but I’m sure you brilliant people can remember exactly what happened here. I’m dying to know.