The Over/Under On Lucha Underground Episode 14: Patronizing The Temple

– Good news! If you’re still looking for a legal way to watch this show online, you finally have options. You can check out the UniMas website for episodes streaming in Spanish or find El Rey Network on Sling TV for the English language version. Hell, watch them both.

Please click through for the Over/Under on Lucha Underground episode 14 from February 12, 2015.

Alberto El Patrón has been in the presence of Dario Cueto for like 30 seconds when he asks (and I’m paraphrasing), “what’s the deal with that key?” Cueto blows him off, but I love that Lucha Underground is a universe where somebody paused the writing process for two seconds to say, “hey, if a guy’s wearing a giant key around his neck wouldn’t strangers ask him about it?” Just addressing it and moving on goes a long way. It’s even better when it’s a subtle power play, with El Patrón accomplishing in a sentence what Johnny Mundo needed punches in the face to do.

Over: Alberto Still Has His Car Entrance, Only Now It Actually Makes Sense

In WWE, Alberto Del Rio would drive expensive cars into the arena as part of his ring entrance. It never made a ton of sense as they established Del Rio lived on a palatial estate in Mexico (employing Canadians) and assumedly kept his cars there, which suggested he picked out a car, drove it from Mexico to wherever WWE’s live event was being held, then drove BACK to Mexico to start the process again. I mean, he could’ve used a car delivery service, but that wouldn’t make any sense. Also, why’s he driving cars into the arena? Wouldn’t he just park like everybody else? Did he get into his gear before the started driving or did he change on the way? Did he make a 3,000 mile car trip in nothing but underpants and a scarf?

Anyway, Lucha Underground has carried over Del Rio’s car gag by simply having him drive a luxury car to the Temple and park it. It accomplishes everything the WWE car entrance did besides “fans see a car live” and makes El Patrón seem like a rich person might in real life. Plus, hey, some rich people are cool. They got that way for a reason and aren’t necessarily evil bastards for doing so. Five stars.

Over: Let’s Not Let A Bunch Of Licking Overshadow Fenix VS. Argenis

There’s a lot (a lot) of story happening around Fenix and Catrina, but before I get into that I just want to point out that Fenix rules (duh) and that even the story-based Lucha Underground matches get to be actual, entertaining wrestling matches with decisive finishes.

I’d also like to point out that when two men are in the ring, commentary’s usually pretty great. Striker and Vampiro put an emphasis on the history of the competitors and their origins, as well as namedropping any important family backgrounds and championship histories. Here they point out that Argenis is the brother of Místico, aka the original Sin Cara aka lucha sensation MISTY EYES, and that alone gives Argenis relevance to U.S. fans who may not closely follow lucha libre. If I’m trying to explain Argenis it’s a lot easier to say “that’s Sin Cara’s brother” and get him over than “his name is the Latin word for silver, which is interesting because most luchadors use the Spanish word ‘plata.'” I fell asleep just typing that.

Under: Commentary Has Never Seen A Woman Before

when a woman comes on screen, though

It’s honestly night and day. When guys are wrestling the announcers are engaging and having a nice time. When a woman shows up — whether she’s heel, face, a wrestler or valet — they go into “OH MAN, LOOK AT THIS GIRL” mode. That’s not to say you can’t point out how attractive a lady is, it just shouldn’t be all you do, and you shouldn’t do it every second she’s on screen. When Catrina shows up they’re talking about how they want to f*ck her within SECONDS, saying they “can’t say” what they want to do. Striker uses “seductive” three times per sentence and it just falls off a cliff. There is a non-exaggerated conversation about how they’re perverts who are being turned on by what they see.

Later in the show when Ivelisse shows up, they ignore most pertinent story points to talk about how they “love a fiery Latina” and how she’s a “hot piece of ay-ess-ess.” Who let Chris Farley’s bus driver character from Billy Madison call wrestling? There is so much important stuff going on in Lucha Underground and sometimes I worry that Striker and Vampiro are just too Bro to get the memo.

Over/Under: Wait, Is Catrina Magical Too?

Now it appears she has another: invulnerability to pain.

I think there’s more going on with Catrina than we realize. She’s always been at Mil Muertes side and we’ve always kinda accepted him as the lucha libre personification of death, but we’ve just thought of her as a valet. She keeps getting kicked and knocked out during matches, but always seems to recover quickly. Here, she confronts Mil backstage about what’s going on with her and Fenix and he LIFTS HER OFF THE GROUND BY HER NECK. How does she respond? With nothing. She doesn’t even grimace. It’s like he’s picking up a doll.

I think that’s important. I don’t think they’d pay such attention to her facial expressions if they weren’t. Catrina’s caught in the middle of a feud between a guy with 1,000 lives and a guy with 1,000 deaths, and I want to know what it is about her that set it off. Sometimes a lick is just a lick, but sometimes it’s wacky lucha libre super powers.

Over: Big Ryck Is Going To Literally Kill Some Dudes

The very best part of the episode is the vignette of Big Ryck in an eye patch smoking a cigar in a confessional and asking for pre-emptive forgiveness for the literal murder he’s going to throw at The Crew.

Man, sometimes I don’t even have analysis for this show. I just watch it with my eyes bugged out and laugh to myself about how awesome it is. Ryck even gets a VENGEANCE IS COMING on-screen graphic that shouldn’t work, but totally does.

Over: Most Stories Are Fine If They Just Make Sense

There’s a lot of concerning “he’s my BOYFRIEND” and “I’m a BITCH” stuff going on with Son of Havoc and Ivelisse, but stepping away from that, I actually enjoy how their breakup is going. Son of Havoc has lost every match he’s ever been in but he’s lucked out by getting a match with a marquee guy coming off an injury. Johnny Mundo got his knee destroyed last week by Cage and King Cuerno, so the playing field is shockingly level. This is Havoc’s big shot to make an impression.

He does really well too, and for all intents and purposes has the match won when Ivelisse starts freaking out about him hurrying up and closing the deal. It’s enough of a distraction for him to linger on the top rope too long making confused faces, and that costs him. Mundo recovers and puts him away, and now Havoc drains back to the bottom.

Mundo continues to do the best work of his career by not only selling the knee, but at least trying to express the dilemma of a guy with a bum leg trying to get through his leg-based offense. It gets worse as the match goes on, and that’s a very simple ring psychology thing “John Morrison” would’ve never considered. Well, maybe he’d consider it, but he’d never be asked to do it. 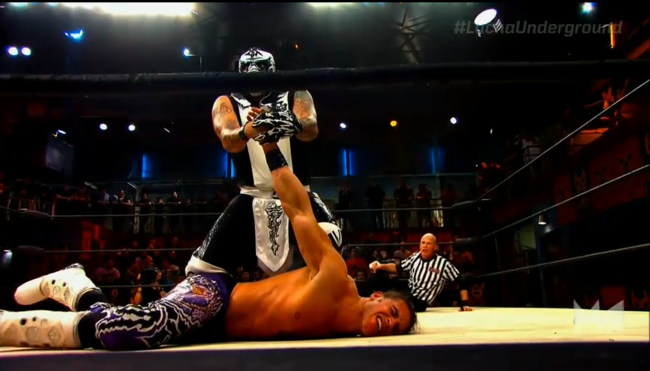 Over: Pentagon Jr. Is So Tired Of These Jokers

Pentagon Jr. breaks another jobber’s arm to praise his dark master and yep, Pentagon Jr. is my favorite guy on this show. His match comes right after an attack on Johnny Mundo from King Cuerno, so it’s safe to say this is where the in-ring portion of the show peaks.

I’m excited to find out who his master is. I hope it’s Pimpinela Escarlata in a Jedi robe.

This is the man we’ve always wanted to see. He takes off his jacket and tie when he gets in the ring because he realizes he’s in the presence of family, then talks about his actual family. They call him “lucha royalty” but it’s not a nickname … it’s the truth. He’s part of one of the richest and most celebrated lucha libre dynasties in the sport’s history, and listening to him talk candidly (and passionately) about WHY he came to the United States and WHY he put up with all the bullshit and racism is incredible. He goes in and out of Spanish because he’s speaking to everyone.

He never mindlessly throws anybody under the bus or “shoots” on WWE, he simply points out that things aren’t always what they’re supposed to be, and that Lucha Underground is a place that will never hold you based on the color of your skin. You live or die, fail or succeed based on whether or not you can get it done in the ring, and he can always get it done. This promo is a happy ending to a pretty disappointing story. When you read about Triple H looking for a top Latino star, listen to El Patrón and wonder why the hell they made him Brown Million Dollar Man instead of himself.

The best part? It ends the way it should. Tejano, the guy El Patrón took the AAA Championship from, shows up in the Temple on his heels and beats him down with a rope. Like Del Rio said, Lucha Underground isn’t about talking. It’s about action, and reaction.

And getting hit a bunch of times with a rope.