– In case you always skip the pre-show notes and still haven’t picked up on this, there are now legal ways to watch Lucha Underground online. You can check out the UniMas website for episodes streaming in Spanish or find El Rey Network on Sling TV for the English language version.

Please click through for the Over/Under on Lucha Underground episode 16 from February 25, 2015.

Under: When Atmosphere And Expectations Overshadow Matches

So this week’s first match is Aero Star and Drago in a rematch from a few weeks ago. That match ended in a show of respect (between a dragon and an astronaut), and so does this one.

As will happen from time to time against my natural instincts, I wasn’t a big fan of this. Lucha libre — especially lucha libre performed between a dragon and an astronaut — can feel disjointed by design, but this felt especially so. It was heavily edited, with a few obvious cuts that took me out of the action. Aero Star’s first big dive to the outside is edited in a peculiar way, as is his counter in the corner where he kinda does a front flip to a charging Drago and asses him in the back of the head.

At the same time, the vibe of the crowd and announcers says they’re watching a classic. Lots of THIS IS AWESOME and HOLY SHIT chants for almost nothing. I say “almost nothing” as an asshole sitting at a computer who can’t do 1% of what either of these guys do, but when you’re in The Temple you see a LOT. On this same show you see guys diving into the announce table and destroying parts of the building and doing triple jump shooting star presses to the outside. When you THIS IS AWESOME and HOLY SHIT at everything, it feels more like you’re responding to the atmosphere and expectations of the show instead of what you’re actually seeing. Granted, cheer how you want to cheer, I’m not your Cheer Boss, I just wanted to point it out.

The good news is that this isn’t the last time these guys will get to fight:

Dario Cueto leans out of his office like the world’s most evil, Spanish Mr. Belding and says that since Drago and Aero Star “love each other,” he’s giving them an (air quotes) unique opportunity (end air quotes). They’ll compete in a best of 5 series, with the winner getting an undisclosed prize that knowing Dario Cueto could range from “a title shot” to “being fed to my cage monster.”

Aero Star and Drago are tied 1-1 with a minimum of two matches remaining, so we’ll get to see the best they have to offer. I’m a huge fan of simplifying wrestling stories and saying “the person who wins the most matches gets a thing,” especially when the story involves reincarnated fictional animals and guys from outer space. 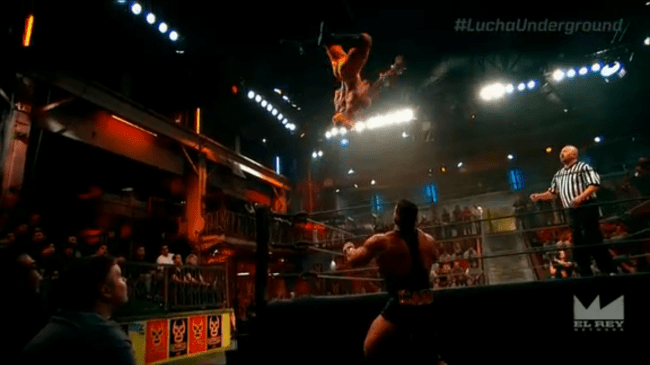 This was such an improvement over the opening match I can’t even explain it. Puma and Cage feel like guys who are meant to pro wrestle forever. One’s an impossible athlete that can’t stop jumping and kicking and spinning. The other’s a guy with an impossible physique that can’t stop running at people and picking them up and throwing them. It’s like two puzzle pieces that finally found each other.

This is more story than match, but I like that they didn’t sell it out. This is the situation: Cage has to defeat Prince Puma in a non-title match if he wants a for-realsies title match later. In WWE, the booking would always be the same: Cage would win, possibly by cheating, and Puma would get pinned by something that’d never pin him in the title match. WWE guys love jobbing to secondary finishes in non-title and elimination matches. If you’re in a Survivor Series match and you aren’t important, dudes can pin you with a hip-toss. They can Irish whip you and you’ll hit the ropes and just fall down and lose.

Here, though, the story remains consistent. Puma gives it his all, as he’s compelled to do, and isn’t easily put down. He’s managed to hang with and almost defeat Cage by escaping or countering a lot of his big moves, and taking advantage of Cage’s overconfidence. Cage is more focused than ever, though, because he has a clearly defined goal that he actually cares about — proving himself to a bunch of jerks he assumes will never admire him — so more of his stuff hits. He KILLS Puma with a series of big moves, and the only reason Puma lasts as long as he does is because Konnan rises from the grave and wills him on.

That only pisses off (and motivates) Cage more, so instead of going for a pin, he just keeps dropping Puma on his head and punching him in the face. Konnan throws in the towel, symbolically turning this ENTIRE story into a Bob Backlund tribute, and Cage gets what he wants. 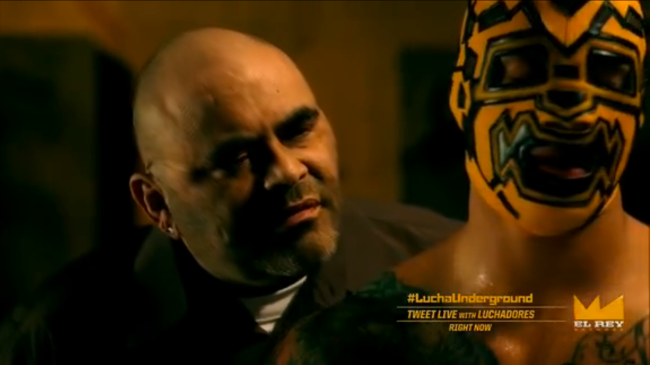 Over: Konnan Throws In The Towel

The best part of the story is that there are more layers to it. We get a backstage segment where Konnan seriously appears to be making tired and defeated Puma TRAIN, all the while leaning over his shoulder telling him he did the right thing and that he’ll live to fight another day. They’ve got to play out Konnan’s plan to fruition. That’s interesting, because you’d assume “getting your protege over and helping him win the top championship in the company” would be enough, but it isn’t.

Puma’s not happy about it, either. Why? Well, the big reason is that he probably wouldn’t have given up. We’ve seen Puma come back from a lot, and even a bunch of ruthless Cage fists in the face might’ve gone his way. Maybe the ref would’ve DQ’d Cage for castigo excesivo. Maybe Cage would’ve lost his focus with Konnan out there and started slipping up. Instead, a damn towel cost him the match.

Still though, no words. That moment when Prince Puma finally says “enough is enough” and speaks up is gonna be great.

Over: DAMN THE MAN

Sexy Star demanding a shot at The Crew without a bunch of dudes hopping in and bailing her out against her will was our exclusive clip this week, so I’ve already said my bit about smashing the damn patriarchy. Still, though, nobody on this show’s better at making a dramatic statement than Sexy Star. She deserves a Pulitzer Prize in sounding like her dialogue was written by Square Enix.

I also love that Cueto’s putting her in a match with Big Ryck because he knows Ryck’s enraged, and assumes he’s enough of a psycho to take it out on Star. That’d eliminate Cueto’s “freaks who’ve stuck around too long” problem, and still result in one of two righteous good guys getting eaten alive 3-on-1 by his posse of thugs. What a bastard. I love him.

So Over: Ashley Massaro’s Shitty Dad Enters the Temple

The absolute highlight of this and possibly the entire run of the show is VINNY MASSARO showing up at The Temple and challenging Pentagon Jr. Imagine if my out-of-shape blogger ass went to my local Planet Fitness, recruited the first four guys I found wearing shorts and walked into the Oracle Arena to challenge the Golden State Warriors.

He’s SO HORRIBLE. Striker says he has an “MMA background,” which could mean anything. Judging by his performance against Pentagon, a background in mail carrying would’ve done him just as good. Poor Vinny gets mangled and broken, and his sell of the pumphandle driver is the stuff of legend. He just hits the ground and his entire EVERYTHING goes limp. It’s like he fell out of an airplane.

I want Vinny Massaro to show up again six months from now wearing a headband like Rambo to try it again.

Over: A Rain Of Arrows

The main-event is the next step in the confrontation between King Cuerno and Johnny Mundo, and they’re another perfect pair. King Cuerno has a better inside-to-out wrestling move than anyone in wrestling. Period. The Arrow From The Depths Of Hell is simple, but it’s gorgeous. Like fine art. Brother just shoots himself through the ropes with his head down and his arms out, and he doesn’t hit you on the way out he’s just gonna keep going. If Mundo hadn’t been standing there he would’ve went around the earth and crashed into the back wall of the Temple.

At the same time, Mundo’s all about showing up his opponent. He does his best to come up with something absurd to top the arrow, which he more or less pulls off with a double side-roll dive thing. He basically becomes Diddy Kong. Add in the personal issue of Cuerno “hunting” Mundo and costing him the match against Cage, and you end up with this: a fight that starts as a bunch of jumping and ends with them punching each other until walls fall down. They fight up and around the Temple and crash through a free-standing cage wall, which is the kind of wink-wink nudge-nudge booking foreshadowing that makes wrestling work.

Very good stuff. Mundo continues to do the best work of his career by simply being in the right place for his skillset, and King Cuerno is the best wrestler on any show without Pentagon Jr. on it.

?: We’re Gonna Need A Companion Mini-Series To Figure This Out

In last week’s column I asked a probably-not-important question about how time works in The Temple. The mysterious Black Lotus lady has been creeping around the building for like four months looking for Cueto’s cage monster, and last week she found it. This week she’s tied up in the back of a trunk and getting moved around by a different mysterious luchador guy. It kinda mirrors the opening of episode 1 — a nameless luchador saving someone and telling them to “follow him” to The Temple — but … how long has she been kidnapped? I feel like we’re missing an entire thing, and I would NOT be unhappy if we got a companion web series for Lucha Underground that starts at the beginning of the Black Lotus story and fills in all the necessary gaps. It’s like we’re falling asleep during a great movie and waking up at random parts.

I’m wondering if time has anything to do with it at all, and if we aren’t just seeing chronologically mixed-up scenes from the bigger story. Like, Cueto could’ve been holding the Lucha Underground championship and talking to his cage monster before the Temple even opened. Black Lotus accosting Cueto in his office and scaring him could’ve motivated ANYTHING.

Worst case scenario, we get to talk about it forever. It’s like LOST. Who cares if they ever pay it off? WEIRD SHIT’S AFOOT.