Who Is The Greatest Wrestler Of The Attitude Era: The Rock Vs. Steve Austin 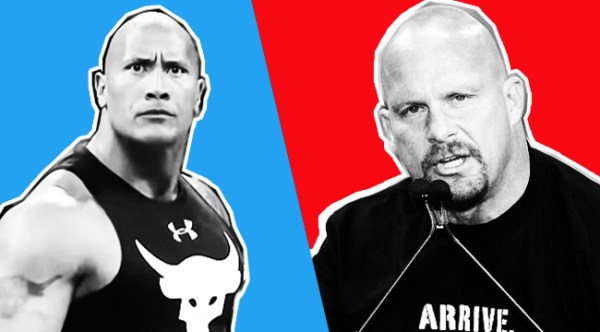 While professional wrestling has been around for more than a century, WWE itself has dominated the sports entertainment landscape for the past three decades and counting. Within that period, there’s no doubt that the biggest era of all time was the Attitude Era. It was the era of Mr. McMahon and D-Generation X, The Undertaker and Kane, the Three Faces of Foley and more — but no two superstars defined the Attitude Era more than Stone Cold Steve Austin and The Rock. Together, the pair main-evented three WrestleManias and sold out hundreds of arenas across the country. But when it comes to being the top dog, there can be only one. So the real question is: Who was the biggest star of the Attitude Era, Austin or The Rock?

To decide, we let two of our writers debate the topic in the spirit of Dewcision 2016. Here’s what they had to say:

There’s no question that if you were to build a Mount Rushmore of pro wrestling, The Rock’s face would be on it. But Steve Austin’s bald, goateed head would be right there next to him and it would probably be just a few inches bigger. These two guys were the Beatles and the Stones of the Attitude Era, always trying to one-up each other, but The Rock only truly became “The Rock” after feuding with Steve Austin, first over the Intercontinental Championship, then over the WWF Heavyweight Championship.

Sure, they both sold metric tons of merch and put hundreds of thousands of butts in seats throughout their respective runs, and they’re each remembered for their iconic catchphrases and highly entertaining mic skills, but the real way to tell just who was the greatest star of the Attitude Era is to look at the main event of what is considered by many to be the greatest WrestleMania of all time, WrestleMania X-7. In it, Steve Austin pinned The Rock (not without a little help from Mr. McMahon, but still). It’s pretty clear that when you have two of the biggest stars of your era facing off, the winner is the bigger of the two. That’s just science, y’all. — Scott Heisel

Steve Austin may have built the bird flipping, Stunner-giving foundation of the Attitude Era, but Dwayne ‘The Rock’ Johnson put a skyscraper over it. In the ’80s, you depended on Savage and Piper to deliver some quality and substance, but Hogan shouting about vitamins and ripping his shirt was what really sold the tickets. In the ’90s, guys like Steve raised solid hell, but the millions (and millions) were buying their tickets to see an eyebrow and an elbow.

Steve Austin leveled out after his feud with Vince McMahon. This is not an insult — few people will accomplish anything in their respective fields as important as that feud. But The Rock? He just kept rising with title reigns and movie deals, main event after main event. Even his heel turns couldn’t hurt his momentum. He had a blue-collared show named after him. He was so important that Rikishi tried to kill a human being for him. Of course, if you were to ask The Rock who he thought the biggest name of the era was… he would tell you that it didn’t matter what you thought. Then he’d scowl at you until you just voted for the People’s Champ. — Joe Starr

As long as there has been pro wrestling, there have been heel turns. There’s no better way to make a crowd of thousands react than by taking a beloved fan favorite and steering them toward the dark side — and the more shocking the heel turn, the better. From Andre The Giant turning on Hulk Hogan to Evolution turning on Randy Orton to Bret Hart turning on the United States, we’ve been shocked time and time again. But two heel turns stick out more than any other: when Shawn Michaels ended the Rockers by throwing Marty Jannetty through a plate glass window and when Seth Rollins broke up the Shield by slamming a steel chair into the back of an unsuspecting Roman Reigns. But which one was more shocking?

To decide, we let two of our writers debate the topic in the spirit of Dewcision 2016. Here’s what they came up with:

Guys, I’ll give it to him: Seth Rollins killed a thing we all loved. He cracked Roman with a chair and he broke Dean’s heart. In an age of smartened up fans and sports entertainment, it was one of the biggest ‘holy crap!’ moments we’ve had in years. But it’s got nothing on the king of heel turns; after all, even non-fans know what you’re talking about when you bring up the legendary ‘barbershop window.’

HBK did more than break up The Rockers when he superkicked Marty Jannetty and then tossed him through a window. He superkicked our fragile little kid hearts too. Nowadays on NXT, Bayley has superfan Izzy, but in the age of trapper keepers and Sonic 6 bikes, The Rockers had thousands of Izzys across the country. With one dastardly act, Shawn Michaels told them all exactly where to shove their homemade tassels. One single act defined a career and coined the term “you’re the Jannetty.” When it comes to heel turns, nothing comes close. – Joe Starr

Sure, everyone reflects fondly on Shawn Michaels throwing Marty Jannetty through a window, because it looked awesome (and because Bobby Heenan’s commentary was perfect). But was the heel turn really shocking? The Rockers had been having communication problems in the weeks leading up to that, and anyone who’s watched wrestling long enough knows that’s a classic sign of a tag team splitting. With Seth Rollins turning on the Shield, however, it was completely unexpected and truly shocking — this was a team that had dominated the WWE landscape since their debut nearly 19 months prior, winning the Tag Team and U.S. Titles along the way. There had been little teasing of a breakup before Rollins’ betrayal, and the trio was coming off an incredible six-man tag main event with Evolution the night before. Seth Rollins truly stunned the WWE Universe with the chair shot heard ’round the world.

Let me share with you a small story: I make it a point to try and watch Raw live as it happens every week, but on that particular Monday night, I skipped Raw to go see a concert thinking I wouldn’t miss anything huge since there was a PPV the night before. Then, all of the sudden, during the show, virtually every friend I have who follows pro wrestling texted me at the same time, all with messages about how heartbroken and in disbelief they were. I was immediately sucked out of show mode and thrust into wrestling mode, and I raced home after the gig and stayed up until the wee hours of the morning to see what had happened. Not only has there never been another heel turn as shocking as Rollins’, there has never been another moment in modern pro wrestling as immediately shocking that generated such a “Did you see that?” reaction from the masses. Not The Undertaker’s streak ending, not CM Punk’s pipe bomb, not even Daniel Bryan’s retirement. Seth Rollins truly takes this one. – Scott Heisel