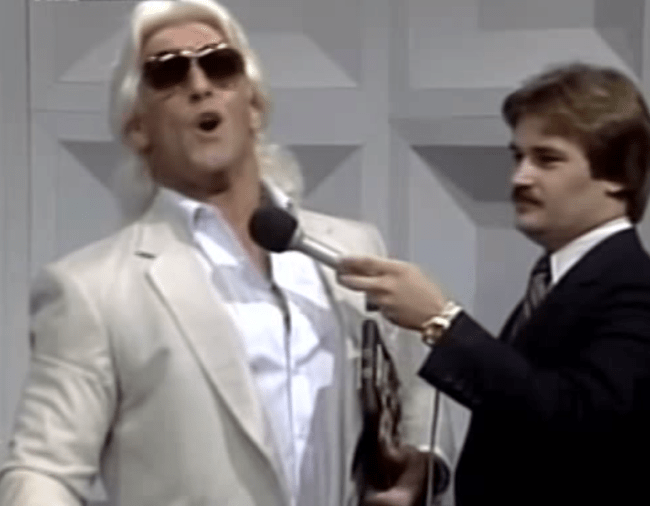 On the most recent episode of The Ross Report, Jim Ross was able to get former WCW announcer Tony Schiavone to open up about his time in wrestling, a thing not many are able to do these days. While Schiavone all but shuns requests to be interviewed about wrestling, he opened up to Ross about Eric Bischoff, criticism of his weight, and Ric Flair’s dick.

When asked if he used to party with the legendary Horseman, Schiavone said that he used to go to a lot of parties with Flair, but he had to stop. It wasn’t because he couldn’t keep up, though:

He had a gimmick. He poured the drinks out – everybody thought that he could out-drink anybody, but the fact is everybody else would get drunk, but he wasn’t.

Is nothing safe from being a work in wrestling? My goodness. Now, that’s all well and good, but it makes the reason he had to stop hanging with Flair even more concerning. Schiavone explained that he got tired of going out with Flair, not because he couldn’t hang with him when it came to drinking, but because by the end of the night he “would take his pants off and show everybody his thing.”

I love that a) Schiavone is a grown-ass man and yet still calls it “his thing,” b) Ric doesn’t have to be drunk to just wanna show everyone a bit of Flair. Truth be told, the mental image of Schiavone recoiling in horror from the limousine ridin’, jet flying, dick-showin’ son of a gun is exactly the mental image I needed to get through this here Friday afternoon. Woo indeed!