‘Total Divas’ Episode Recap: The One Where We Try To Be Positive For Once

For this week’s one-day-late Total Divas episode recap, I thought it might be fun to put myself in an unknown situation and see where my mind takes me. Instead of dragging my feet through the horribly-titled, “Mo’ Money, Mo’ Purses,” like Paul Rudd in the Camp Firewood cafeteria, I wanted to come at this one with an all-positive attitude to see if I could find the lighter side of each of this show’s lazy and mostly-offensive story lines. What’s the point of that, you ask? I don’t know, something different, I guess.

Look, we’re already so close to me writing rage-inspired alternative story episode recaps for Total Divas – an idea that isn’t all that terrible – so I thought that for the sake of my mental health, a little switcheroo might do us all good. If anything, I might finally get a call from the Pulitzer committee for my work in making Nattie seem like a positive influence on females.

1) Paige – I can get upset with her for dumb things, but she’s still wonderful.
2) Brie Bella – Keep in mind that 2 on this list is like 47 on a regular list of 10. Positive thoughts…
3) Cameron – Still waiting on that music video episode to push me right over the edge.
4) Eva Marie – This is brilliant strategy, taking her out of several episodes at a time to make us forget that her stories manipulate her health and family for the sake of faux-sympathy.
5) Nikki Bella – Attention WWE Films: I will write a screenplay for a gritty origin story of Cruella de Vil, starring Nikki. No fee, just points on the back end and maybe some tickets the next time Raw is in Orlando. Call me.
6) Alicia Fox – Now that the pointless “Why’d you break up with me all those months ago?” thing is over, can we focus on Foxy being likable and fun?
7) Rosa Mendes – There hasn’t been a more pointless character on a series since Mark Brendanawicz.
8) Nattie – The worst.

Hey, did you guys see me in the crowd on this episode’s RAW?

White sunglasses on the hat? A sign for Paige at a WWE live event? Might as well be me. All he’s missing is a Tyson Kidd tank top, because SUNS OUT GUNS OUT, BROS!

Eva Marie’s whole family reunited and her dad is ready to mack!

The most positive thing that I can say about this week’s episode is that it had no aneurism-inducing fake drama in it. Sure, it had “Oh f*ck this nonsense”-inducing drama, but that’s pretty standard at this point. Instead, this was an episode that focused mostly on family and the people that our favorite Divas love the most, and that started with the return of Eva Marie, whose presence in any episode means that we’re about to hear about her personal problems before she cries.

Eva Marie felt like her family keeps leaving her in the dark about her father’s health, so she turned the family’s 23-year reunion into a celebration of their dad, whose health problems have been the focus of some poorly-written episodes. Basically, Eva Marie believed her father’s health issues meant that he was sitting on the curb, waiting for Death to swing by and grab him, and she took it upon herself to turn her family’s getaway into a bucket list showcase for their dad. Even better, she just made a list of things that she assumed he should do before he dies, because screw actually asking him, right? The positive in this is, of course, that she is proactive and considerate. (Also, she’s practically nuclear in terms of bronzing at this point. I’m genuinely concerned.)

However, what Eva Marie didn’t take into consideration – you know, in addition to her father’s actual health status and what he would actually want to do – is that she’s a professional athlete and a finely-sculpted mound of muscle, so her family couldn’t keep up with her energy and passion. Things finally came to a stalemate, though, when she planned a skydiving excursion even though her dad hates planes. It was even worse because Eva Marie’s brothers ratted her out to their dad for making a bucket list for him, since she thinks he’s dying tomorrow.

Eva Marie ultimately felt bad for trying to make this reunion special, so she apologized and let everyone relax in their awesome Vegas villa. Then they drove racecars, because VROOM FUN! I assume that Eva Marie’s brothers’ trip to many strip clubs, some of which turned them away because of the one dude’s refusal to ever take off his backwards hat, will be saved for the DVD box set outtakes.

In a very important and emotional Total Divas story, one of Nikki’s favorite designers announced a collaboration with her other favorite designer to make a special anniversary purse, and only a few were being produced. The price tag? Only $15,000. That sounds like a lot, but you can’t pass up the chance to buy a purse. As Brie naturally protested such an expense – “You can put a down payment on a house with that money!” – the Bella Mom compared a $15,000 purse to the $7,000 water-recycling system that Brie and Daniel Bryan bought, because she’s “comparing passion to passion.” You know what? I love collecting old comic books when I can find a good bargain. Some people prefer committing acts of genocide. So I guess by Bella Mom’s standards, me and Slobodan Milošević are basically one in the same.

Nikki learned of the new purse while talking to Brie and Sandra, the WWE’s wonderful costume designer, and she said, “Look at this tote,” while bending over directly in front of the camera. And here I’ve been worried that Nikki would never evolve as a character and/or human. I take back every bad thing I’ve ever written about Nikki Bella and her breasts. She’s the next Meryl Streep, who I believe also got her start as a pro wrestler.

Because this show is way too predictable, John Cena bought the $15,000 purse for the woman he won’t marry, so Nikki spent a lot more money on clothes and a suitcase. Brie didn’t like it, which didn’t matter because Nikki is the QUEEN B COMING THROUGH and she thought it was awesome. However, that didn’t last long, because it was finally time to visit a financial planner to talk even more about life after the WWE, what happens if Daniel Bryan’s organic pull-and-spray method doesn’t work, and how it all affects the Bella #BRAND.

FLIP MODE: It was suddenly about irresponsible Brie Bella now. Her solution to pregnancy was seriously to become the first pregnant Diva, with a “Bella baby bump” (you can bet they’re already trying to trademark that), and possibly work behind the camera. Meanwhile, Nikki thought that if she’s going to invest in something, it should be “wine stock.” This led to an interesting argument: which of the Bellas will be worth more money by the time they’re 40? Nikki says it’s her because while Brie will be popping out the Bella Baby, Nikki will be a businesswoman in “so many businesses.” Stop laughing and be positive: Softcore porn is a business.

Tyson Kidd is the best

Nattie was still very worried about her dad’s health, so she said that she has been constantly calling her mom and checking in, and you know she was being honest because she called her mom on camera. She then asked Tyson, “Do you know how much I’ve been texting her?” and he responded, because he is the most wonderful part of this show, “More than you text me back.” Yes, it’s somewhat mean for him to antagonize his wife while they’re separated and she’s dealing with so much drama, but she caused all the sh*t that has been ruining* their marriage. *For the sake of a reality TV series.

Anyway, Nattie is giving her mom a home makeover! 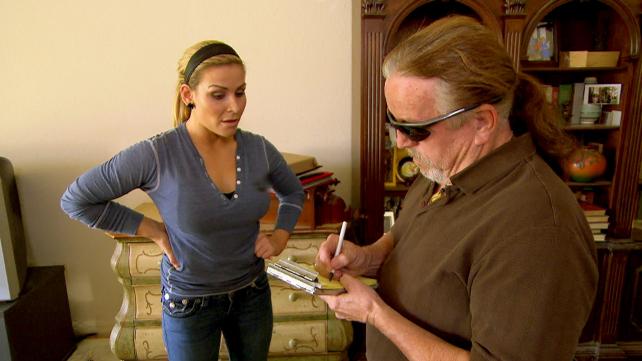 While the Anvil is in rehab, it’s time for Nattie to tend to her mom, but there’s something that mom hasn’t been telling us. Nattie’s mom’s house flooded and it was probably a pretty nasty health hazard. The positive of this was that it’s bringing Nattie and Tyson back together, but the negative was that it’s a house in Florida, so not only was it built like crap and the workers are finding new problems left and right, but they have to deal with Florida construction workers, which is basically like betting everything you own on the double zero on a roulette wheel.

At the heart of Nattie’s home renovation plan was her feelings for Tyson, so Naomi visited this week to tell Nattie that she projects her own problems onto everyone around her and that’s why things suck with her and Tyson. This is 100% true and Naomi is off the show why? Because she’s likable, rational and intelligent, and also married to a beloved WWE Superstar. Remember that the next time Rosa shoves her breasts in the camera and tries to make out with everyone on the WWE roster.

If all else fails, Nattie could have her own HGTV series, Wrasslin’ Renovations. But what was nice about Nattie’s story this week was that it showed us what she could have looked like all along, going all the way back to the beginning of this series, when I actually liked her more than anyone. She could have been the industry vet looking out for her family’s legacy while serving as a leader for the WWE’s new breed of female stars. Instead, she chose the bumpier path that was paved with my vomit, and next week’s episode preview revealed that she thinks that Tyson will just take her back and pretend like she hasn’t been… all along… the absolute BEST at being the worst.

1) Paige – She wants a tattoo next week and the WWE is all, “No way, Jose.” I bet that’ll be dramatic!
2) Alicia Fox – Only seen in the ring this week. Good, we need a breather.
3) Rosa Mendes – Absolutely nowhere to be seen this week. THANK YOU, JEEBUS.
4) Cameron – Also nowhere to be found this week. Basically, we’re in for a hella bad episode next week.
5) Brie Bella – Dude, if your sister wants to buy a $15,000 purse, let her do it. Let her do everything. Eventually she’ll want to stick a $15,000 fork in a socket.
6) Nikki Bella – I want John Cena to dump her ass.
7) Eva Marie – I commend her for not going over the top with the family this time.
8) Nattie – How bad was the story session for this episode when the best they came up with was “Um, Nattie’s renovating her mom’s house, uhhhhhhhh Eva Marie’s dad goes to Vegas, and ehhhhhhhhh I dunno, maybe Nikki buys a purse? Yeah, shoot it, I have a DVR full of sh*t to catch up on.”