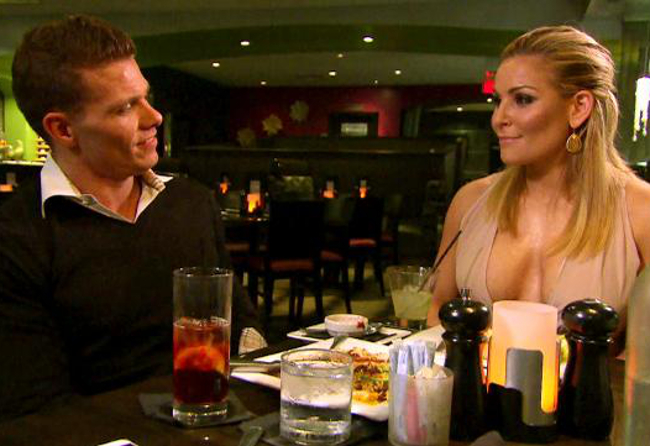 Last week’s episode of Total Divas was kind enough to give us a heads up that we’re steering the SS Episode Recap right into a hellish storm of infinite nightmares in this week’s episode, “Model Behavior.” That’s right, Cameron and Vincent are about to have another one of their trademark relationship problems, and this time it’s because her father and Vincent are simply planning their future without her. I guess some women like to know when they’re being marched to the altar, especially if those women need to focus on both their professional wrestling careers and the release of a debut single entitled, “Chingle Chingle (I’m Still on the Show and Naomi Isn’t).” Or something like that.

So, I will be writing this week’s Total Divas recap from inside my patented “Girl-Bye” Divas shelter that is reinforced with enough titanium and pesticide cannons to keep Ray J at least 100 yards away. I strongly encourage you all to invest in one as well, especially for when Cameron’s music video episode finally airs.

1) Paige – They’ve made her inappropriately suggestive and wildly drunk, and I still have no problem with her.
2) Alicia Fox – Now that I’ve had some time to cool off from her “Why Bad News Barrett, why?” episode, Foxy is back on my good side.
3) Brie Bella – Default ranking.
4) Cameron – For now.
5) Rosa Mendes – Pending the saving of orphans from a shark attack, this is probably the highest she’ll ever be ranked.
6) Nikki Bella – I could use an episode off from her, please.
7) Eva Marie – Ditto.
8) Nattie – Poor Nattie, always the worst, even when she’s fixing up her mom’s home.

Further proof that this show gets its best ideas from 1990s sitcoms.

Just when you think that true love doesn’t exist in the WWE, Nattie and Tyson Kidd come along and remind us that even scripted love can be kind of touching…

Nattie: “It’s times like this I’m happy I have you.”
Tyson (with the expression of Ralph Wiggum reading a Valentine’s Day card): “You have me?”
Nattie: “Do I?”
Tyson: “Now more than ever.”

Normally, that kind of sugar could kill a walrus with diabetes, but after everything that Total Divas has put Tyson through, in trying to somehow turn him into a bad guy for “ruining” his marriage, you and I know that he’s the bigger and better man here. Even if you weren’t able to take your eyes off of Nattie’s bronzed 12-to-6 cleavage. So that appears to be it – Nattie and Tyson are back together and everything that Nattie previously started between them is water under the bridge. All it took was a family emergency and a nice, romantic dinner at which neither of them were wearing Roots of Fight. (Not a dig against my favorite soft t-shirts in the world, I swear.)

Tyson doesn’t like being referred to as “Nattie’s husband” by the two people who chanted that at a Raw show, but what was most interesting about that was how Nattie changed that to “Nattie’s better.” I mean, maybe those people meant it that way, but if me and my bros were sitting ringside at Raw for a Nattie/Tyson match, I’d be chanting that more as a way of saying, “Dude, why?” But what I really loved about this was how serious Nattie was about being “better” than Tyson at wrestling, and the way she acted like she’s a leading name in the industry. That got a great belly laugh out of me.

However, Tyson was indeed bothered by the chants, so Nattie encouraged him to branch out into another industry: modeling, of course. That led to a new low for this series, an awful lie of a commercial cut. Basically, Tyson’s half-nude, hot babe modeling session teaser made it seem like Nattie hated it, and then we came back from the break and she was totally fine with it, because she’s the “new Nattie.” So this show has gone from constantly lying in episode teasers, making it look like marriages were ruined, friendships were over, and jobs were lost, to doing that in a mid-episode commercial cut scene. That’s remarkable. Also, terrible. 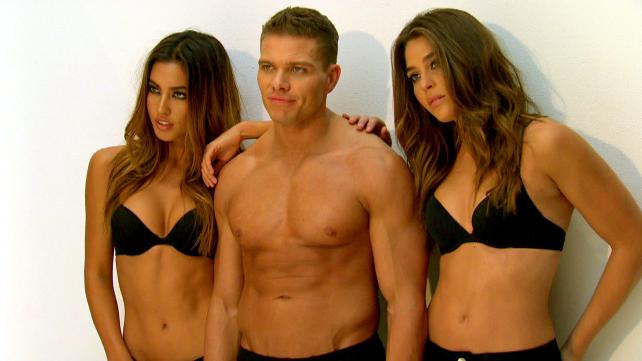 Eventually, though, Nattie revealed that a gorgeous model having her bare breasts on Tyson’s back made her very upset, even though it was her idea for him to model. He admitted that he didn’t like the icky girl’s boobies on his back either, and Nattie’s bronze boobs are the only boobs he ever wants to have on his back. This was very oddly sweet, despite still being poorly written.

It’s Paige’s Body, And She’ll Ink What She Wants To

Paige wanted to “evolve” her character by getting a tattoo sleeve or maybe “a chest piece,” and that includes a picture of her mum, “the most beautiful person inside and out,” because “I Heart Mom” really needs to make a comeback. Of course, as the guy in charge of the Divas – Merle? Milton? Melba? Mulva? – explained to her, #PAIGE is a #BRAND and a tattoo can potentially damage that, which would in turn hurt the WWE. Also, Jerry Lawler was in the room for this scene and he told Paige that he’s not a big fan of tattoos on girls. Because when you need to critique a 22-year old girl’s looks, you bring in The King.

Paige was very upset that the WWE’s creative team said no to her request for a chest portrait of her mother, and she was even more upset that the guy in charge – Muggle? Mogwai? Meningitis? – talked to Alicia Fox about it. My favorite thing about B-stories like this one is when the Diva immediately goes to the ring and beats someone up, like “GRRRRRR I’M MAD AND WILL TAKE IT OUT ON MY OPPONENT as much as the script will allow.”

The Worst F*cking Thing Ever On This Show

Paige (to Rosa and Foxy): “Who needs to get their p*ssy waxed?”
Rosa: “I’ve done it once and she took my skin off with it.”

Guys, I try really hard not to be crude or tasteless when I’m writing this, because while I loathe the characters-within-characters that are portrayed on this series, they’re still women. Some of them even do extraordinary things. But this scene by itself was awful. Right after lunch, though, when I just finished a roast beef and swiss sandwich? I should have GIF’d my Steve Harvey disbelief face to include here.

The Best Part Of This Episode

Who did Rosa and Foxy call to show up and talk to Paige when they found her in the tattoo chair about to get a skull between her boobs? That’s right, Nattie. When someone is about to make a decision, it cannot be made until the ultimate decision-maker shows up to make it for her.

Yes, Paige should be able to do whatever she wants with her body, hair, skin, etc. However, she also needed to realize that she’s a very fortunate individual with a job that plenty of women would kill to have, so if the Creative team says, “No, you can’t have a tattoo,” you know what you do? Wait a few years and get one when it can’t ruin your #BRAND. But because the guy in charge of the Divas and even her father (whose voice sounded like he’s a guy who should be on this show) told her not to get a tattoo, that meant it was time to start inking. When the episode actually came to the logical conclusion, though, I asked myself if the show had become rational or if I’d sunk to the show’s level. I’ll take a happy medium at this point.

Vincent thought it was time for his family to meet Cameron’s family, and she was not cool with that because her father is a former crack addict, and she was worried that people will judge her for that. Of all the things that I’ve judged Cameron for, her father doesn’t even crack my Top 10 (pun so obviously intended), so I don’t get what she was worried about. According to Cameron, her dad lives in “the boonies” and Eva Marie, in a moment of true friendship, admitted that she’d never visit her “best friend” (the one who showed naked pictures of her to the entire company) if she lived there. Aw, you guys.

Cameron’s two biggest sticking points on having her father meet Vincent’s family were: 1) “No pimp outfit,” which is understandable; and 2) she wanted to have his teeth fixed, since he lost his teeth from the whole ack-cray thing, and that really, clearly embarrassed her. Enough so that she was willing to pay for him to get emergency dental work so he’d have a full mouth of chompers when the family dinner takes place. As he laid in the chair at the dentist’s office and mumbled, “My daughter wants me to get my teeth fixed,” or whatever, I didn’t just feel awkward, I felt bad. Bottom line: This story is really, really stupid. Of all the family nonsense they’ve roped into this series, Cameron’s dad’s crack teeth take the cake.

Vincent asked Cameron’s dad for his blessing to marry her, and he was so sweet and wonderful about it. Not sweet and wonderful enough to make me forget that Cameron asked him 30 seconds earlier to put his good teeth in, but it was a nice distraction. That all went to hell, though, when Pops revealed that Vinnie had asked for Cameron’s hand in marriage. To be honest, I thought they were engaged, but I’m wrong. They weren’t and Vinnie’s family and Cameron were pretty shocked. What a clusterf*ck. But they cheered it anyway, because… I have no clue. This show is absurd.

1) Paige – I’m waiting for the episode where she kills Daniel Bryan’s dog to really test my fondness for her.
2) Nattie – SHOCKING! Seriously, she was pretty good in this episode. A positive, kinder, less fake-crying Nattie would be good for everyone.
3) Nikki Bella – A nice escape from her nonsense this week.
4) Brie Bella – She falls below her sister because of her awful answering machine message and the fact that she has an answering machine.
5) Alicia Fox – She was the least offensive of the waxing conversation.
6) Rosa Mendes – She was the most offensive of the waxing conversation.
7) Eva Marie – She said she wouldn’t visit Cameron in “the boonies” and I know she wasn’t kidding.
8) Cameron – The stuff with her dad was horrible.