The legacy of the late Ultimate Warrior is one of passionate insanity. A legacy that reached into the brains of children and brought a loud, snarling, impossibly muscular comic-book character to life inside a wrestling ring. He influenced a generation of stars, was often imitated, and lives on as part of WWE’s Hall of Fame.

Today, on what would have been the Warrior’s 57th birthday, we’re choosing to honor him in a very different way: by recalling his unbelievable, unforgettable few months in World Championship Wrestling in 1998. If you remember the journey, look back on it with us. If you don’t, read on and try to imagine that any of this happened in real life.

We’d be doing you a disservice if a piece about The Warrior in WCW didn’t start with a bit about The Renegade.

In 1995, WCW was beginning its transition from regional promotion (and alliance of symbiotic regional promotions from across the country) to legitimate national competitor to the World Wrestling Federation. To do that, they adopted pro wrestling’s favorite booking strategy: Do whatever our competitor was doing a few years ago, with all the same people. In it were Hulk Hogan, Macho Man Randy Savage, Brutus Beefcake, The Nasty Boys and others. Young talent like Cactus Jack and Stunning Steve Austin quickly found themselves out of a job. Even established, world class talent like Big Van Vader saw their roles reduced from “unstoppable champion” to “guy who looks like an idiot trying to wrestle Hulk Hogan.”

They had everyone they wanted from the classic WWF crew, save one: the semi-retired Ultimate Warrior. That was about to change. You know, eventually. Not right now.

At Uncensored 1995, Hulk Hogan was scheduled to main-event one of the worst attempts at a pay-per-view in wrestling history, topped only by Uncensored 1996, in a leather strap match against Vader. During the build, Hogan started hyping up the “ultimate surprise.” This was accompanied by video of a silhouette of a man (Scaramouche, Scaramouche) with ’80s metal hair, arm tassels and the Ultimate Warrior’s taunts. It wasn’t subtle. Everyone was like YEAH, THE ULTIMATE WARRIOR’S COMING BACK, because we hadn’t all figured out the Internet.

The “ultimate surprise” turned out to be THE RENEGADE, aka “the Ultimate Warrior if you just glance at him and immediately look away.” WCW was like, “hey, people like the Warrior because he’s ripped to sh*t, weirdly connects to crowds and cuts batsh*t insane promos … what if our Warrior wasn’t ripped, couldn’t connect a plug to an extension cord and never talked? AND he was terrible in the ring??”

He defeated Arn Anderson for the TV Title. Hogan called him, “the man who will bring Hulkamania into the 21st century,” but he was barely able to bring it into 1996 … the real Warrior popped back up in magazines (and the WWF) and was like, “are you serious, bro?” Anyone who hadn’t immediately dismissed poor Rick Wilson turned that corner, his momentum was halted, and he stuck around for a while as the worst dude in a tag team with Desperado Joe Gomez.

Trying To Recreate The UN-RE-CRE-ATABLEEEE

As you might have guessed from the title of this piece, WCW eventually convinced Warrior to sign. He’d returned to wrestling in March of ’96 at WrestleMania XII, but was already on the outs with WWF by July. Warrior had started no-showing shows claiming he was grieving for his father who’d recently passed away. Vince McMahon knew Warrior hadn’t talked to his dad in a decade and didn’t even like him, so the story changed to Warrior believing Vince was in breach of contract for not giving him enough merchandising money. WCW was like, “THAT SOUNDS LIKE A NON-DRAMATIC PERSON TO HAVE ON OUR PAYROLL.”

After another semi-retirement, Warrior finally arrived on Nitro. It was the greatest moment in the history of our sport. If you watch the clip, Mike Tenay’s, “we know who that is!” makes it sound like a TNA segment. If you remember watching it live, you probably loved it. Everybody did. It was the Ultimate Warrior in WCW, one of those things that was never gonna happen, and he was in the ring accusing Hulk Hogan of pooping his pants. Warrior told the WAY INTO IT crowd that there’d been rumors that, “something ultimate or warrior may soon reappear.” Both of those were true! “Welcome to the reappearance!”

The story according to Eric Bischoff is that Warrior was brought in so Hogan could get back his loss from WrestleMania VI. Because yes, Hulk Hogan is exactly the dude who would spend hundreds of thousands of dollars and everyone’s time and effort to even out his fictitious win/loss record from another wrestling promotion from eight years ago.

Yes, Warrior only had three matches in WCW. Three.

The first and one of the worst ever — even if it’s not the worst of the three — happened at Fall Brawl ’98. If you grew up watching the NWA or WCW, you know that War Games is basically the most bulletproof match gimmick ever. It was the perfect style of match to blow off a feud between factions, and produced some of the greatest matches in company history. War Games ’92 is probably the best match WCW ever had.

If you aren’t familiar with the concept, it featured two teams of four or five in a staggered entry, two-ring, two-cage bloodbath. There was no way in our out until it was your turn, with a flip of a coin determining which team would gain an early (and semi-regular) one-man advantage. You couldn’t even WIN the match until everyone was in, and then it became “submit or surrender.” No pinfalls, no excuses, no bullsh*t … the winning team is the one that planned their entry order correctly, gutted it out and refused to lose. It’s a booking master class.

In 1998 WCW was like, “yeah, no, we can improve on that.” They decided to have it feature three teams of three, let you win by pinfall or however you wanted at any point in the match, and the PERSON who won (notably not the team) became the #1 contender for the WCW Championship. So War Games without the strategy, intensity, logic, drama or teamwork. Nailed it.

Warrior competed as part of “Team WCW,” but he was more or less his own team. During the match, the ring fills up with smoke. The Warrior appears, and Hogan (and Stevie Ray!) jump him. Did we mention that WCW Warrior gained the ability to teleport? More on that in a bit.

He’s in the match for about two minutes, by the way. Hogan escapes the cage (which you aren’t supposed to be able to do) and locks Warrior, who has the ability to f*cking teleport as we JUST F*CKING SAW, inside. Instead of teleporting out, Warrior kicks part of the cage loose, awkwardly crawls through, hurts himself and follows Hogan to the back.

45 Seconds Of Wrestling On Nitro

Warrior’s second WCW match reunited him with his old tag-team partner Sting, to face Hollywood Hogan and Bret Hart in a match that really should be legendary and not seven minutes of a Nitro you don’t remember.

The match is seven minutes long. Sting wrestles about 6:15 of it. Warrior spends the entire match on the apron, in his jacket. He tags in, throws some clotheslines and gets jumped by the nWo. The bell sounds, Warrior and Sting win by disqualification, and the Ultimate Warrior logs about 45 seconds of action on Nitro. Note: This is the only time he ever wrestled on Nitro. And he didn’t even take off his jacket.

To make things more complicated, the ring fills up with smoke to help Warrior escape, but The Giant just headbutts him out of the ring. So the teleportation smoke just appears for no reason. Sting has to hop back in the ring and start beating people up, and Warrior ultimately (cough) steals Hogan’s weight belt and chases everyone to the back with it. A SUPER SMOKE BELT, no doubt.

The build to Hogan/Warrior II was on, so Warrior started getting magical powers. Beyond the teleportation, I mean.

He gained telepathy, which he used to brainwash Hulk Hogan’s best friend (“The Disciple,” aka Brutus Beefcake in his third or fourth worst gimmick) into following him. He added him to the Warrior cult, known as the One Warrior Nation. The group included Warrior and The Disciple, meaning it was too small to be a nation, and one dude too many to be One Warrior. It was nWo backwards, though. Get it?

Warrior also became Batman, and got a “Warrior signal” that would shine up onto arena ceilings when he was needed. He was usually standing in it, so it was pretty worthless. Warrior would taunt Hogan by taping fireworks to his dressing room walls and tagging everything. 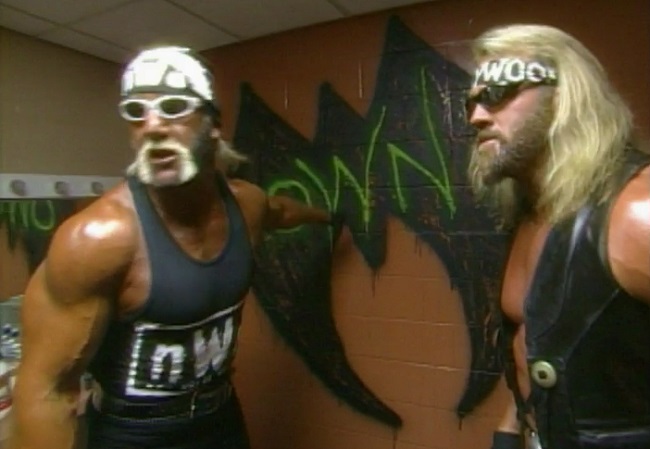 He also used his BEST magical power, which deserves its own section. You know what we’re talking about.

I’m Asking Him To Change His Ways

Hogan chases Warrior into a dressing room, but when he follows him in, Warrior’s gone. Warrior then appears to Hogan in the mirror. Hogan turns and tries to punch him, but we realize it’s an hallucination, and/or Warrior using magic to escape into a mirror, and/or a two-way mirror with some light on it. Eric Bischoff is all, “WHAT ARE YOU LOOKIN’ AT, MAN, THERE’S NOTHING THERE!”

The problem is that we see it. Also, the announce team sees it and acknowledges it. So it’s not Hulk Hogan hallucinating at all, it’s Bischoff being blind, or having a mental breakdown and blocking it in real-time. Or, I don’t know, standing at the wrong angle to see behind a two-way mirror?

Going Down In A Blaze

If you’re wondering how this all works out, behold: one of the very worst matches of all time. Even the WWE Fan Nation highlight video starts with them messing up a fireball.

Hogan and Warrior got their match at Halloween Havoc ’98 and sh*t the bed so hard it breaks the floor. Just watch the clipped version and try not to throw yourself through a window. Hogan tries to burn Warrior’s face with flash paper, but he messes it up, throws NOTHING at Warrior and Warrior SELLS IT. Keep in mind that Warrior couldn’t sell a f*cking Pedigree at a WrestleMania, but he’s selling a phantom throw. The paper burns up in Hogan’s hands, and they go right back to clubbing forearms. They all should’ve just bowed and soft-shoed to the back in apology.

But yeah, it keeps going until Eric Bischoff is literally headlocking the referee, Hogan’s hapless Bullet Club-ass nephew Horace is sneaking in to swerve Warrior with a steel chair, and Hogan’s getting back his WrestleMania loss with a LATERAL PRESS~.

So if you’re Warrior, you just end it there, right? Cut your losses and carry all your boxes back to Destrucity?

Warrior appears for the final time on Nitro the night after Halloween Havoc to “get revenge” on the nWo by clotheslining them out of the ring a bunch. He disappeared into WCW’s vanity mirrors forever, and retired from wrestling.

And that, ladies and gentlemen, is the legacy of the Ultimate Warrior in WCW. A lot of smoke, a lot of sentences that didn’t make sense, a teleportation magic trick trap door that severely injured people, a Shockmaster-quality mirror threat and a handful of the worst matches you’ve ever seen. He wouldn’t show up again in wrestling until 2008, when he defeated Orlando Jordan in Spain in front of a bunch of people sitting on their hands. Warrior’s response to wrestling after that was, “Yeah, no.”

But hey, we’ll always have the mirror.