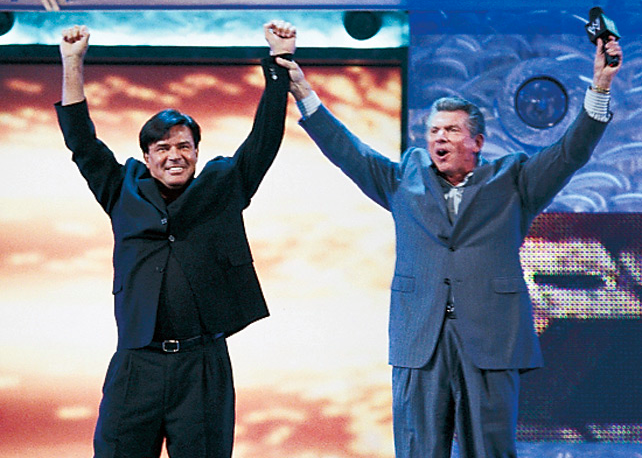 Vince McMahon has always kept up a cool demeanor when discussing the Monday Night War – probably because he won in the end and got to make his competition eat sh*t for the last 15 years. But, according to the ever-reliable Vince Russo, Vince McMahon actually came close to fighting Eric Bischoff on national TV. If you recall, Bischoff challenged McMahon to a fight on pay-per-view. And while it seemed implausible that it would actually happen, Russo says that Vince almost accepted the challenge.

Regardless of the fact that Eric and WCW would have greatly benefited from this publicity stunt, because it was a WCW pay-per-view, the business of it didn’t even cross Vince’s mind at the time. As a man, he was challenged, and his instinct was to answer the call. Vince was dead-set om showing up and fighting Eric. Trust me – the boss was serious. I could hear it in his words and I could see it in his eyes – he wasn’t kidding.

So what stopped it? The date for the fight fell on Stephanie McMahon’s graduation from Boston University. So Vince had a decision: go to his daughter’s graduation or have a Worldstar fight with Eric Bischoff.

Part of me wishes that Vince were a worse father. Sorry, I just want what I want. Who would have won? While Vince was a roided up monster, Eric had martial arts training. So it could have gone either way. Dah well. All we can do is speculate.