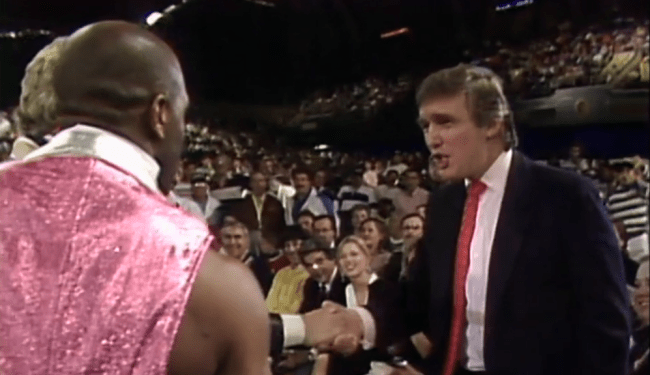 It turns out Donald Trump and Sean Hannity weren’t the only ones comparing the CNN GOP debate to WWE. Former pro wrestler Virgil – now known best for his Iron Sheik-like tirades – says that Trump reminds him of a professional wrestler, and is taking all of the credit.

Virgil took a break from his bizarre obsession with the Olive Garden and insistence that he’s Xavier Woods’s father to give TMZ this ‘exclusive’ (if not slightly cringe-worthy) reaction:

Virgil says he met Donald at WWE events in the ’80s and ’90s, and claims the business mogul picked his brain for tips on being a great showman.

Virgil, who is a Republican, had one more piece of advice for Donald — “All people want to know is that they can pay the bills and live a good life. They want confidence they can eat.”

Virgil’s role was primarily making grumpy faces and aggressively counting money while wearing a sleeveless tuxedo because Pro Wrestling, so unless Trump is spending his debate time standing behind Jeb Bush and waving around his ‘f*ck money,’ we might take this with a bigger grain of salt than usual.