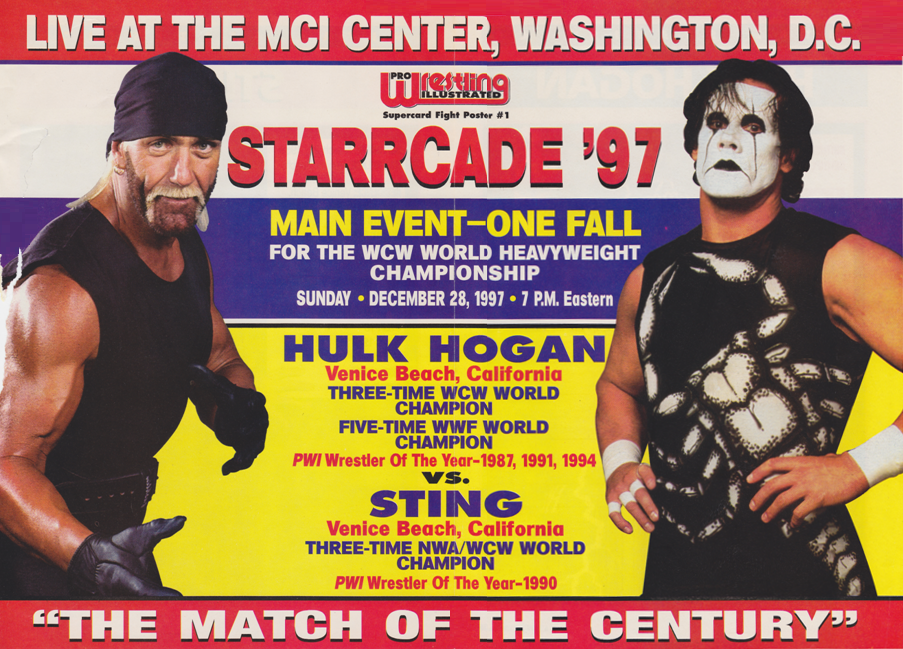 I’ve watched every single documentary WWE has produced about its famed “Monday Night War” with WCW because, like most of you, I grew up during this golden age. Unfortunately, I’ve left every experience disappointed because the story follows a comically simple narrative: Eric Bischoff stole WWF stars, became successful because of the acquisitions and ultimately failed because of a resistance to creating new stars. That version of the story makes WWF look like the victim, falling prey to Ted Turner’s deep pockets before clawing its way to victory. And while much of that is true, WWE’s version of the war never acknowledges arguably the biggest reason it eventually pulled ahead of WCW: Starrcade 1997.

This is bullsh*t. And it does a disservice to the biggest draw in wrestling during the MNW not named Stone Cold Steve Austin: Sting.

If Sting had gone to WWF anytime in the late 80s or early 90s he’d probably be on the Mt. Rushmore of big wrestling draws right next to Hogan, Rock and anyone else. But he stayed in WCW and was one of the best pure babyfaces who could put on a better match in his sleep than Hogan ever could.

Then Hogan happened to WCW. Here’s what happened in the Sting’s first three pay-per-views after Hogan showed up in WCW: he no-showed the Bash ’95, lost to Vader in a triangle match minutes after Vader beat Guardian Angel (formerly Big Bossman), then he showed up at Halloween Havoc to cut a promo about how excited he is to sit in the f*cking front row and watch Hogan vs. Flair.

The burial was on. But Sting kept trucking and, along with Flair, was the hometown favorite in WCW no matter how many WWF guys came in. Then 1996 came and the NWO happened – an NWO that was originally supposed to have Sting as its third man. This all led to War Games 1996. The NWO hatched a plan to fool WCW into thinking Sting had joined their ranks by having a fake Sting show up on Nitro and beat up Lex Luger in the parking lot. Everyone at WCW bought the ruse despite the fact Sting was in Japan and Luger is an idiot who can’t tell if the guy in front of him is his best friend or an a-hole in Sting makeup. When Sting tried to plead his innocence at War Games, nobody at WCW believed him. What happened next created the biggest babyface of the WCW-era Monday Night War.

Sting hit the ring in the middle of the War Games match between Team WCW and Team NWO, wiped out the entire NWO and left the ring. It was basically Goku taking out the Napa in wrestling form. And it was the coolest thing ever. Then Sting donned a Crow-themed outfit, a black baseball bat and stayed in the rafters for 18 months.

For that year-and-a-half, WCW played up a “will he or won’t he” angle where we wondered if Sting was really joining the NWO or coming back to WCW to exact revenge on Hulk Hogan. He’d show up briefly on Nitro and pay-per-views, never saying a word and dropping down from the ceiling once a week.

Here’s what WWE doesn’t want to tell you: by January 1997, the NWO had about 15 members and was already stale just six months into its run. Hogan was in a feud with Roddy Piper and the main event was trash. The only selling point of the NWO/WCW feud by that point was if and when Sting would declare himself Team WCW and take out the NWO once and for good. Just listen to any time Sting showed up. The pop was monstrous. And go back and watch Uncensored ’97 (Spoiler: it’s horrible); the crowd reaction when Sting came down and beat up the NWO rivaled anything Stone Cold ever did in WWF. The Sting angle – the homegrown Sting angle at that – was what kept WCW on top in 1997. I can tell you personally that my friends and I tuned in for the first hour of Nitro for the luchadores and stayed tuned because we knew that Sting would eventually show up and do something. Whether he was pointing at Hogan with a bat or whispering in The Giant’s ear, all we cared about was what Sting did.

The Sting vs. Hogan match would be the biggest match in WCW history. On the surface it was the WCW guy taking out the NWO in one match, but deep down the match would represent the guy Hogan buried finally standing tall and representing WCW in a win. The match would be WCW and, before then NWA, kicking out Hulk Hogan, WWE and all the non-wrestling muscleheaded Rock & Roll wrestling bullsh*t that never should have crossed the Mason/Dixon line in the first place.

Then Starrcade 1997 happened. Sting vs. Hogan. The match of the century. Eighteen months of storyline culminating in one title match.

And it was a disaster. 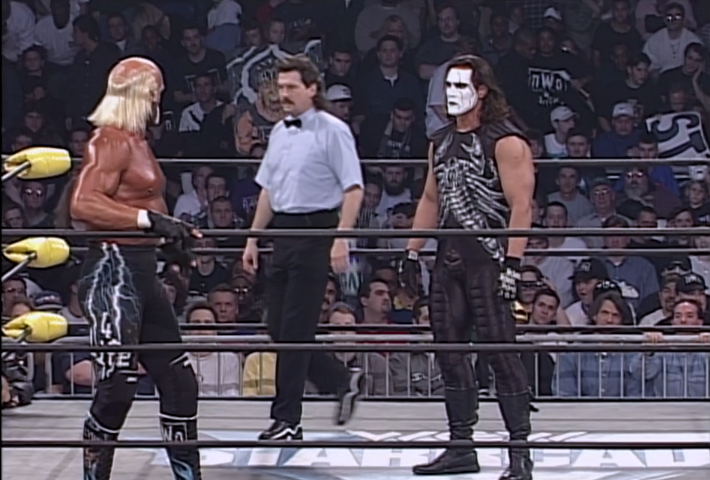 Hogan dominated the entire match, hit a leg drop on Sting and Nick Patrick counted to three. Legally and on time. Then Bret Hart – who was in his first WCW pay-per-view since the Montreal Screwjob…in the role of a special guest referee for chrissakes – stopped the time keeper from ringing the bell and said the count was “fast.” Sting regained composure and pinned Hogan. But it didn’t matter. He was already pinned legally in the ring and looked like a doofus. And Bret Hart looked like a bitter crybaby. Nobody looked strong and the biggest angle in the company’s history was a dud.

Hogan vs. Sting was the easiest match ever on paper. It should have just been 15 minutes of basic wrestling with a babyface comeback and a clean win. But WCW didn’t work like that. Depending on who you believe, the referee Nick Patrick was either told by Hogan to make a regular count right before the match, or he legitimately screwed up the count. Regardless, the match shouldn’t have gotten to that point. There shouldn’t have ever been any “angle” or “swerve” to end the match. It should have been a clean win for Sting. But therein lied a huge problem with WCW: Hogan had creative control and Bischoff wanted his buddy to be happy at all times. So instead of Hogan doing what was right, he politicked the company out of its biggest match.

On a personal note, Starrcade came six months after my parents divorced. I went to my dad’s apartment to watch it. This was back when you had to call in and order pay-per-views, so when my dad called they’d asked for a pin number, but it was a pin number my mom had set up when they were married and he never knew it. There was confusion and we missed the first showing of the pay-per-view while my dad tried to call my mom for the number. It was a reminder that my parents weren’t married anymore and the things they used to be able to figure out by living under one roof just didn’t happen anymore. Still, it would all be better when I got to watch Sting finally beat Hogan on the 10pm replay of Starrcade.

I never got that satisfaction. Instead I watched WCW crap on everything for the sake of keeping Hogan happy. To coin a phrase from the NWA days, the end of Starrcade killed the territory. 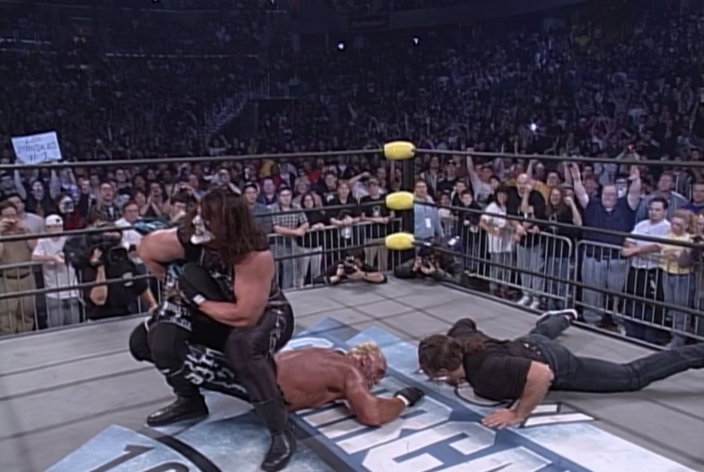 WCW’s last remaining babyface looked weak and unable to beat Hogan without help and he never really recovered. Neither did WCW. It’s no coincidence that WCW’s 82-week win streak ended a few months later. WWF had Tyson, Austin and that crazy angle but it also had the luxury of WCW botching its money angle for egos.

But all of this is going to be lost in the WWE history books. The Starrcade fiasco doesn’t get credit for its role in costing WCW the Monday Night War because doing so would acknowledge that Sting – the homegrown hero in the middle of a homegrown angle – was kicking Vince McMahon’s ass in the ratings and losing his heat is what eventually lost WCW’s fans.

But we were there and we know what really happeend. Sting deserved better at Starrcade and he damn sure deserves better when the story of the Monday Night War gets retold. Sadly, though, Sting is used to being buried.