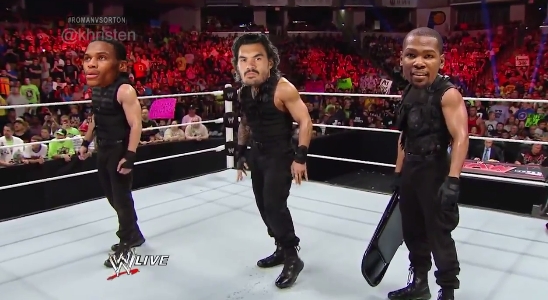 While it may not be the Chosen and Most Pure Sport like the action inside the squared circle, a lot of wrestling fans love the NBA. Despite its lack of Tyler Breeze and angry skeleton ninjas, professional basketball still has its share of heels, angles, and shocking swerves; in a moment that makes Curt Hennig turning on the Horsemen look like dumb baby stuff, Kevin Durant signed with the Golden State Warriors over the Oklahoma City Thunder. Durant has basically done his best Bagwell, signed with the nWo, and beat up poor Scotty Riggs. The smoke on Twitter in the aftermath hasn’t exactly cleared.

And while a lot of NBA purists are in a state of shock and not sure how to react, wrestling fans know exactly how to handle things: With hilarious gifs.

How Golden State about to enter the Oracle next season oh nooooo pic.twitter.com/IWuM7VD0y2

And I guess even the NBA has a few Jannettys.

KD to the Warriors pic.twitter.com/D1DaCgEibf

I do wish that Rodman was actually somehow involved in this, though. GIF-ception!

You know, if these things get too long they start to look really unsettling:

Does this one end with Too Sweets and LEGO?

If Hollywood and the Wolfpac had a third offshoot, I would have been fine with these colors:

So I woke up to the @warriors becoming the new NWO now with #Durant ?…. pic.twitter.com/RKumt7Shkc

And this is great and all Jon Alba, but which one is VK Wallstreet?

Of course, if nWo is a little too on the nose, there’s a modern stable that might be more fitting: