WWE really turned a corner in 2015 when it comes to portrayals of minorities and women. For my whole life, I’ve come to expect the most racist, denigrating portrayals of people of color (and women and poor white people and…) every time they’re on TV. But this year, we saw some really worthwhile black characters on TV who are reflections of me and the people I hang out with. It’s been great.

With that said, I wanted to highlight a few of the moments* that made me feel a connection or sense of pride as a person of color when watching WWE. So, these moments aren’t the best moments featuring black wrestlers (because, obviously that’d be Sasha Banks vs. Bayley). Instead, they’re the blackest moments. The moments I identified with the most. The moments I saw Twitter relate and connect. These are the moments I’ve waited my whole life as a wrestling fan to see. So, let’s enjoy and hope this list is 50 items long next year.

*I put a cap on how many New Day and Team BAD moments because they could really be the whole list. So, I said no more than five for them.

Booker T is so near and dear to my heart. King Booker is a top five character of all-time and his overall career has been about being great when he wasn’t supposed to. For some reason, he’s not allowed to show his natural charisma and hilarity on commentary, but when he’s doing these pre-shows, he’s off the charts.

At the 56-minute mark of this video, Booker drops the greatest reference on the WWE Network, comparing John Cena to Bernie Mac’s character on Mr. 3000. If you don’t know, Bernie Mac is one of the greatest comedians of all-time, but not a guy I imagine Vince McMahon has ever heard of. The reference is random and the best part is Booker T’s pride after he mentions it. It’s like he bet the guys he’d say it and was happy he got it on the air.

Brock Lesnar turned “Suplex City B*tch” into its own thing just by being a caveman and it was beautiful. The best part, though, was this remix of the song over Tyga’s “Rack City,” which means I can pretend that Tyga’s version never existed. Because Tyga is literally the worst rapper in human existence. Brock Lesnar calling someone a b*tch over a rap beat? Yes, please.

During the whole #BlackLivesMatter movement, there’s been a discussion of the place of “white allies.” Where do white people fit in supporting a movement bent on toppling an oppressive system that they ultimately benefit from? It’s admittedly difficult at times for white people to find out their place in supporting the cause.

Well, if there’s any question, just take your cue from Kevin Owens and powerbomb Machine Gun Kelly from the stage while he’s performing. Kevin Owens channeled every rap fan’s deepest desires by tossing MGK onto a table from 15 feet in the air. It’s the greatest hip-hop moment on a stage since ODB climbed the Grammy scaffold.

WWE has a knack for taking trends that have been dead for months and acting like they just discovered them. I’m pretty sure Vince McMahon is going to want R-Truth to Hit The Quan sometime around 2018. So, it’s refreshing that New Day takes these Vines and catchphrases that are current and puts them on Raw.

“What Are Those” — when people point at your shoes that aren’t recognizable or appealing — is all over the Internet. This, combined with the portable basketball goal prank put New Day right on the edge of what black culture is talking about in ways that we haven’t seen before. It’s great to watch and one of the early ways they endeared themselves to fans during this crazy run.

This Backstage Segment With Team BAD And Eden

The beauty of the emergence of black personalities is that a lot of the characters of color have come together to just create their own mini-stories with one another. The Raw backstage stories revolve around the idea that the black wrestlers prefer Jojo over Eden even though Eden is trying harder to be their friend. The whole shtick seemed to start here when Eden accused Sasha Banks of losing against Paige. What results is one of the blackest goddamn segments ever. Just look at these women simply being themselves and looking like every black woman I’ve ever pissed off in my life.

Just look at them. Each facial expression is perfect. I can literally screen cap every second and see something great. 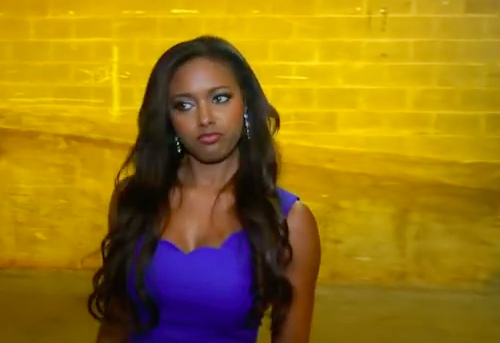 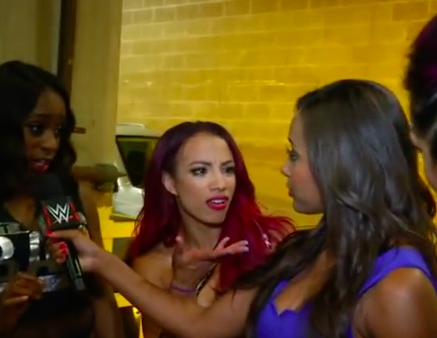 Eden has come into her own as a performer and her personality has shined all year in these segments. Also, Eden, I love you.

Here’s why Apollo Crews debuting in WWE was important: He’s a home run. He’s the first black guy I’ve seen and known that no matter what, WWE won’t ruin him. They can’t. Though I think Big E is on a trajectory to become WWE Champion first, Crews is just such a sure hit that I feel like it’s a countdown until he eventually becomes champ. He’s LeBron James who wrestles and even Vince McMahon has to see dollar signs in him. Sure, Crews is rough around the edges, but he’s supposed to be. I honestly wouldn’t be surprised if he wins the belt and ends Brock’s career when he calls it quits. Crews won’t be saddled with some embarrassing gimmick. It’s just a great feeling to see a black guy and know he holds the key to the company’s future.

The New Day got ballsy as hell by deciding to get heel heat by insulting rap fans. If we know anything about wrestling, it’s that rap and the people who like it are automatically heels. So, insulting rap fans is sort of a babyface move. But New Day went for it anyway and based their SummerSlam promo on getting heat in Brooklyn over where hip-hop started. This is a prime sign that New Day is working with full confidence. They even let off a Peace Up, A-Town Down. Then, the masterpiece: They flip Jay Z and Alicia Keys’ ‘Empire State of Mind’ (thus the copyright issues, and the segment being removed from the replay on WWE Network) to cater to how great they are. Incredible.

Titus O’Neil is the perfect WWE superstar in every way but being a great in-ring performer. He would have dominated the Attitude Era or even the ’80s, but in this era of four-star matches on every Raw, he just doesn’t fit in. However, put a mic in front of him and he shines. We should all remember his brilliant run as Pancake Patterson that led to him opening Raw in an angle with John Cena as evidence that O’Neil is one of the best all-around entertainers in the company. He just doesn’t get enough of a chance to showcase it.

That’s why it’s weird his run on commentary sparring with JBL was cut so short. O’Neil absolutely destroyed JBL and even hit him with a “I have two degrees, how many do you have?” remark. It was terrific and made me feel…proud. Which doesn’t happen nearly enough in wrestling.

I don’t know why this happened, but it happened. And it was easily the best part of a three-hour Raw. Just look at it.

Sasha Banks Comes To The Ring In A F*cking Escalade

Here’s what I said in my article on the state of black wrestlers over the summer:

If I’d have told you months ago that the black women’s champion came to the ring in an Escalade, you’d roll your eyes and say “typical WWE.” But it happened and it was totally authentic. Sasha rolled to the ring — security in tow — in her Kanye shades and four-finger ring, doing her dance and owning an arena. She’s black culture, devoid of any pandering stereotypes.

Of course, when she got to the main roster, she was summarily grouped with the other ethnic divas faction. But I’m telling myself that’s a function of her needing to be part of a heel faction and just a coincidence. Regardless, if the Brooklyn crowd is any indication, Sasha Banks is going to be the breakout star. WWE may want Charlotte to be the crowned queen of the Divas division, but Sasha Banks has it and the fans are behind her. And she’s done it by being herself. A woman of color. No games. No gimmicks.

Yes, it was that important. I can hardly keep it together when I see Banks’ entrance. She became the best wrestler in the world this year and the complete package.

Bonus: The 5 Whitest Moments Of The Year

Any Black Guy Will Do For Bubba Ray

Bubba Ray made a surprise return to WWE at the Royal Rumble. Naturally, they had him do a 3D and the “Get The Tables” spot. But D-Von wasn’t there, so what happens? He grabs a DIFFERENT black guy. Any one will do. This time, it’s R-Truth who is literally the black stand-in for Bubba’s partner. The fact that they explicitly needed a black guy to fill this role is astonishingly white and it was weird to see live. But nostalgia!

A lot has been made about how much swag Stephanie has and how it compares to everyone else in the McMahon family. Even though Shane had a mean Jordan game back in the day, he’s still very white and Vince McMahon’s whiteness is unimpeachable. But Stephanie goes out on Raw and does things like this:

And it’s so effortless. Compare that to Triple H, who looks like he’s selling an atomic drop while dancing with New Day and it’s clear who wears the You Got Served tearaway pants in the family. While Stephanie is maintaining the rhythm, Triple H is cementing himself in a white moment of the year with this little number.

Mojo By God Rawley is the whitest human being I’ve ever seen. The end.

UpUpDownDown is a national treasure in my mind. Wrestlers play video games and talk trash and it’s a shame if you aren’t subscribed to it. The best moments have come in the Madden tournament, namely the Brad Maddox vs. Heath Slater bout where they agreed to talk trash like white guys and the results are pure comedy. R.I.P. Brad Maddox. You were too good for this company.

Sizzle is Damien Sandow’s rap alter-ego, and he’s a super white dude trying to be a rapper. It could go left so quickly, but it doesn’t. Instead, it’s great and a testament to Sandow’s brilliance that he pulls it off. In the most white way possible.