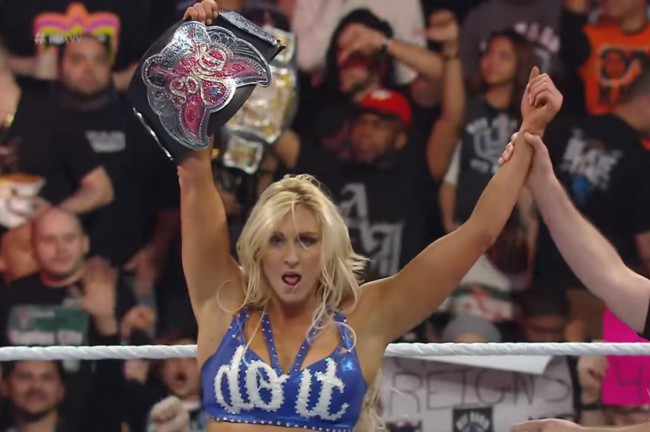 Oh man oh man oh man. The news has finally broken about the future of the WWE Divas Championship and we are Mojo Rawley levels of hype.

PWInsider.com confirmed today that the bedazzled butterfly Divas title is not long for this world. Our sources put the original commission for a new WWE Women’s Championship belt back in the summer, and I think we can all agree that this couldn’t come soon enough.

The belt is being described as an smaller version of the current WWE World Heavyweight Championship logo, with a white strap and a red plate background instead of black. The prototype mock-ups I saw last year had “Women’s Championship” along the bottom, and yes, it nearly made my heart explode with joy. There’s no way to say “we all knew this already” without looking like a total butthole, but every wrestling writer who’s known this has been chomping at the bit to celebrate, and now we get to celebrate so hard you guys. WWE themselves have been hinting at this for a while, and they’ve certainly picked the right time to make the change.

Word is that it’s supposed to be unveiled on the post-WrestleMania Raw, though our sources say that’s been changed to this Sunday at WrestleMania itself. Either way, it’s about goddamn time. No spoilers on the winner, but it’s gonna look damn good on the wrestler who holds it Monday night.

The title match for whichever version they decide to go with takes place on Sunday in a triple threat between current champion Charlotte, Sasha Banks, and Becky Lynch. We can report that the match was upped from 12 minutes to 20, so as dismal as the ‘Mania card may seem, this match is going to be baller as f*ck. This will also be the longest Divas match in the history of WrestleMania, with the previous longest matches not even cracking 10 minutes long.

Now if you’ll excuse me, I have some joyful flailing about to get back to.