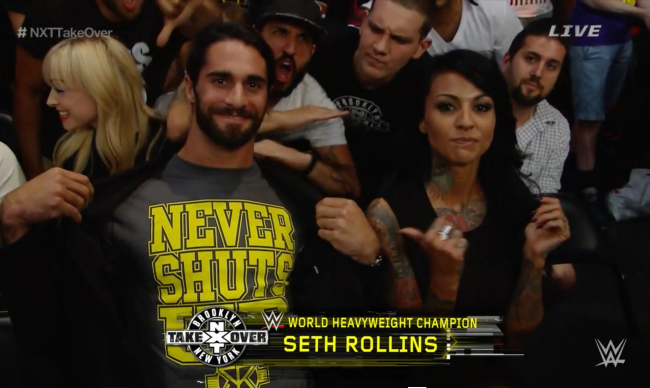 You might recognize Zahra Schreiber as the girl currently dating WWE World Heavyweight Champion Seth Rollins. You may also recognize her as the NXT Diva-In-Training involved in the Seth Rollins nude sexting scandal. Still not ringing any bells? Oh, right, she’s the developmental wrestler who had those swastikas all over her old Instagram photos.

Ohhhh, riiiiight, that one.

Saturday afternoon an intrepid wrestling fan went way, way back into Schreiber’s Instagram account – for scientific purposes, we’re sure – and found these (now deleted) photos from 2012: 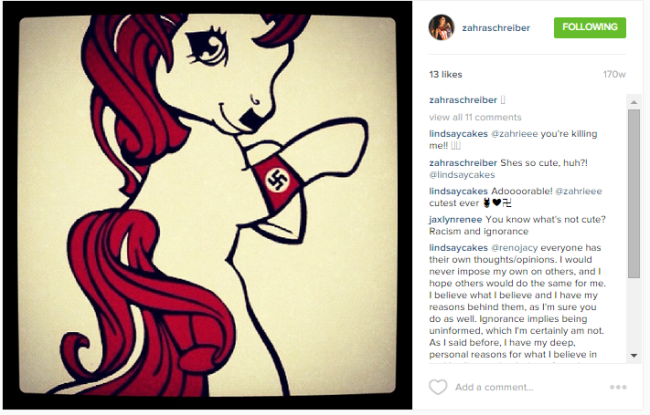 You can read her screencapped comments here, but if you’ve ever heard someone try to defend a swastika in the goddamn 21st century, you know how the asinine arguments go:

“haha it’s not a big deal! I can hang whatever photos I want in MY room or MY instagram.”

“The swastika means prosperity and luck. It was around way before hitler turned it into an icon. Take it how you want I could careless. This is too funny.”

“Believed what way? Lol one of my best friends back home is black and another is married to a black man. I dislike people for their actions not their race. If it happens to be a black, Asian or white person so be it. Mind your business. I’m not all on your sh*t for things you say that I have no respect for.”

“I said that referring to her saying the swastika symbol deserves to be spat on. It has other meanings also. F*ck off. I’ll take interest anything I want. If you look next to it is a photo of an actress who refused nazism and was awarded right to America. I’ll put whatever i want on wall. Get the f*ck over it.”

I’m not gonna lie, I kind of wish the rest of this post could just be a photo of the look on my Jewish roommate’s face as I read Zahra’s defensive comments.

Of course, Schreiber hasn’t always been the best at filtering herself on social media. She’s previously come under fire for using homophobic slurs, ableist comments, racist digs, and more misogyny than you can shake a stick at. I mean, that stick probably has “I’m not like other girls” engraved on it, but still. WWE seems to remain oblivious, however. Even after the news hit, and after she removed the posts from her Instagram, they hyped the debut of her new gimmick on their official NXT account:

Good thing WWE hasn’t had any recent issues with racism at all. Nope, not a single thing has happened that would make people further associate wrestling with big ol’ racists. PHEW.