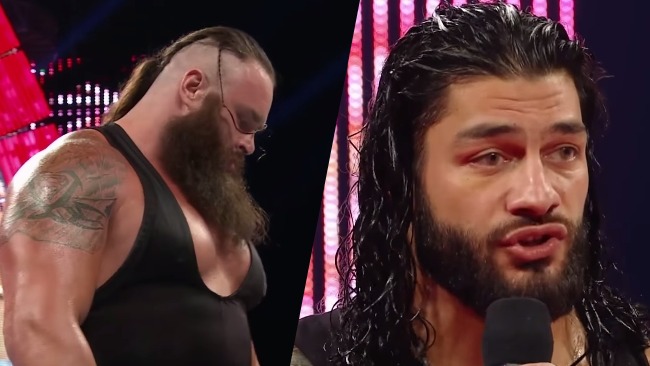 Welcome back to the second installment of all-important, official power rankings for scripted suplex-based morality plays. Last week, we covered promos. This week? The all-important beard. Beards are the unsung heroes of professional wrestling. Would you have been scared of Earthquake without his beard, or have hated Hollywood Hogan without his weird shoe-polish face mane? Beards are the American lucha mask. Here is this week’s carefully-groomed top ten.

Often, the key to a good beard is what you do with the rest of your head to balance it. For instance, when Strowman debuted, he looked a lot like what I assume the concept art for Festus was before Luke Gallows took the role. But now, he’s shaved the sides of his head and his beard has gone from youthful-eyed manbaby bush to full-on, Carcosa-dwelling hand of the Yellow King. It’s crazy what five minutes with a set of clippers can do.

Wyatt’s beard has so much potential and I feel like it either just has heat with smooth faced management or no one can work out to use it. Just when you thought Bray couldn’t have any more upside, his beard starts to break the fourth wall in matches by forking at the end, pointing in two directions as if to agree with the audience: “Yeah, I could really go either way.”

Sometimes you don’t need a lot of beard to reinvent your look. Like when Hulk Hogan put an American Flag mask on and just used the same music. Ziggler is showing just enough stubble to make you know that he’s here for serious business at SummerSlam. Sure, he wants to steal the show, but that stubble wants to win. Fun fact: In the biz, it is actually referred to as “SummerSlam Stubble” or “StubbleSlam.”

With a beard like that, who needs a first name? Or a character or promo time? It really speaks for itself.

Roman Reigns’ suspension beard told you more about his character upon returning than any promo ever could. This beard is going into SummerSlam after a month of being ready to punch his “I got caught” anger directly into someone’s face. Like, I love Rusev and everything, but Roman’s face fur is the beard equivalent of driving a tank into WrestleMania.

Now that Ryder has a very hype younger bro to mentor, he has to set an example with a more distinguished look: the business professional bro. Like, he can still get hype, but he’s also got his real estate license and is really getting his life together, bro. Woo woo woo, nice jeans and a button up.

Viktor and Konnor’s beards are riding high on the list because I believe that compelling fiction to force its audience to ask questions, and these beards do just that. How much time does The Ascension spend wishing they didn’t have these warboy beards? Or do they love the beards? Does the beard make the Ascendent, or does the Ascendent grow the beard?

These beards are a hot tag directly into the characters of all four men involved in the tag team championship match at NXT Takeover: Brooklyn. Gargano is getting married. He’s wrestling for his future family, so he’s more put together. His beard is trim and precise, just like his style.

Ciampa is a psycho killer. We’ve just started exploring that aspect of his personality on TV, but his beard has spoken psycho volumes since his debut. However, they are up against two beards that at first glance look super rough and tumble, but are hiding so much more.

The Revival’s beards look like they would be right at home picking a fight with Dalton at the Double Deuce. But like, they are also super manicured. They’re a little Gargano and a little Ciampa. They’re Ole and Arn, but they also want to be Tully and Ric. Will this be the match that the bearded true nature of the Revival costs them their titles?

Look at that beard. This dude is a crazy person. I don’t even think I noticed the dancing until his third match, because I’m too busy being scared shitless of his beard. This is the beard of an insane person. If you told me Jose had never actually been signed by WWE and had just started dancing into shows, I’d believe you. Because who is gonna tell that beard no?