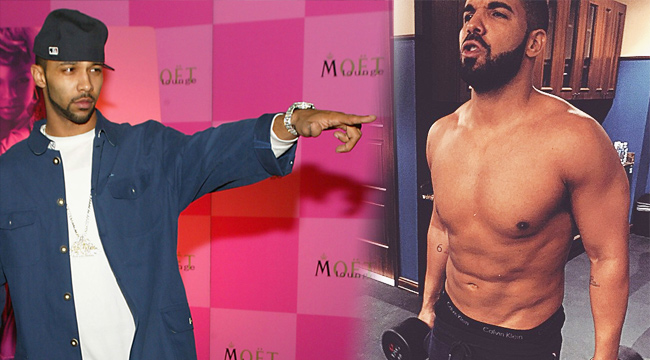 Just in case you were unclear by what Joe Budden was talking about when he commented on Drake’s “sculpted stomach” on the diss track “Afraid,” the former Love and Hip Hop reality star clarified his statements with a tweet over the weekend. Just like the rumor that popped up when Drake debuted his abs last year, Joe Budden says Drake went to popular plastic surgeon Dr. Michael “Dr. Miami” Salzhauer for his new, toned physique.

“He saw Dr. Miami & didn’t tell y’all…hip-hop weird now lol,” the Mood Muzik rapper tweeted in reference to Drake’s “sculpted stomach” line. He continued, “[I’m] sadly not [joking], but sometimes the truth is really funny tho.” Joe went on to accuse October’s Very Own of benefitting from plastic surgery on more than one occasion, tweeting, “Irrelevant rappers >>> rappers who get lipo…twice.”

Obviously, none of us are liposuction experts so we spoke to someone who actually is, New York City plastic surgeon, Dr. Z. Paul Lorenc, M.D, F.A.C.S. Dr. Lorenc compared two pictures of Drake and used his three decades of experience and expertise in plastic surgery to determine whether or not Papi had fat sucked from his abdomen.

@ovojonnyroxx Tank got me working at the Palace!!!!! Push Pounds

“There’s a big difference between the photographs, but [his look] can certainly be achieved with just exercise and weight loss,” Dr. Lorenc said when asked if he thought Drake got liposuction. “I think it’s a strong possibility he worked really hard and had some weight loss. He’s really toned. Look at his pecs, how well developed they are.”

Dr. Lorenc does admit that it’s difficult to say with absolute certainty Drake never got liposuction based on pictures alone, stating, “Obviously, I haven’t examined him and it’s impossible to give 100 percent accurate description, but it really looks like he lost some weight and really defined his muscles.” The New York City doctor who’s appeared on Good Morning America, 20/20 and countless other news programs does believe one can achieve Drake’s look without surgery, adding, “You can certainly achieve the transformation he’s had with exercise and weight loss.”

Whether or not Drake really had liposuction doesn’t really matter at the end of the day. The international superstar has already proven that he can withstand all controversy and rocks thrown at the throne. Being called “soft,” ghostwriting claims, allegedly getting punched in the face by by Diddy, AND allegedly getting pissed on at a movie theatre have done absolutely nothing to slow down his ascent to legend status. Budden mocking his supposed pseudo six-pack probably won’t affect his current success either.