Back in 2015, rumors began to spread that WWE was considering resuscitating World Championship Wrestling’s summer Bash at the Beach pay-per-view concept, saying they were, “looking into doing a live show on the beach.” Years passed and nothing became of it, and now All Elite Wrestling has picked up that board and surfed.

The #AEWDynamite scheduled for Wednesday, January 15th in Miami, Florida has gotten just a little bit bigger now as the event will be Officially Titled: BASH AT THE BEACH

Per the above announcement made on Twitter on Monday afternoon, the episode of AEW Dynamite scheduled for Wednesday, January 15th in Miami, Florida, is now going by the name Bash at the Beach. There’s a venue announced on the graphic, but they could honestly do a version of the show on a beach. January weather in Miami tends to linger between 74° and 63° F, so it’d be great for pro wrestling as long as you aren’t expecting the crowd to hang out in swimsuits and go in the water.

Here’s what WCW’s original vision looked like, if you’re wondering: 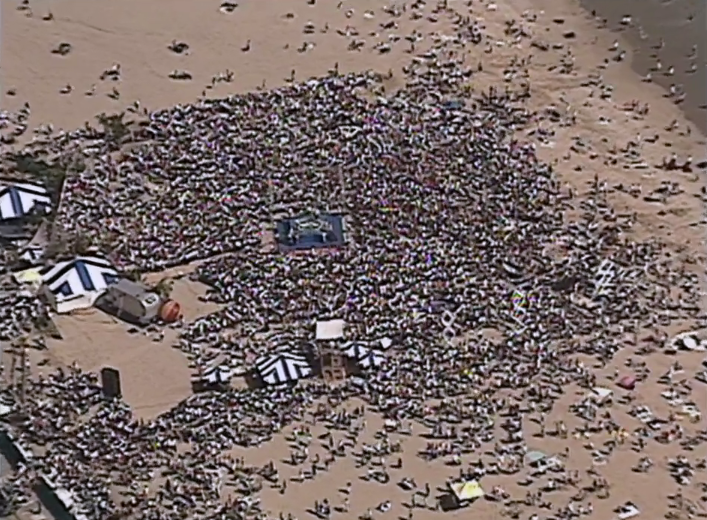 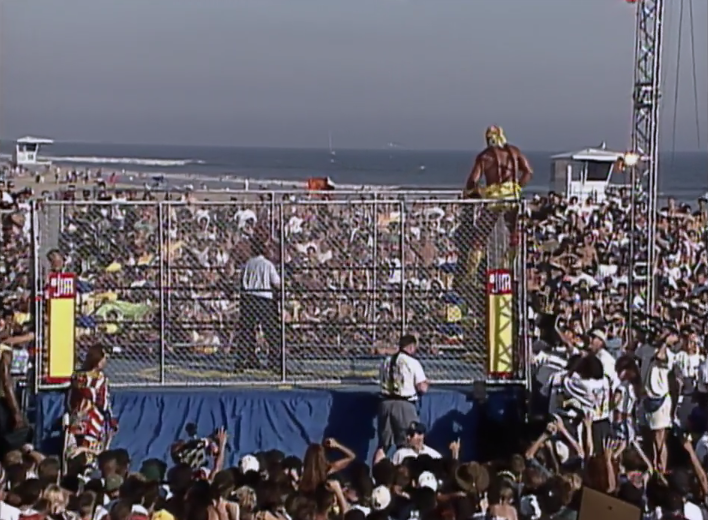 Maybe if AEW’s Bash at the Beach is successful, they can take a trip up to the panhandle and run a spring break show at Club La Vela in the spring. Until then, let’s keep our fingers crossed that AEW can get the rights to use all of the old WCW show titles WWE isn’t using. AEW Halloween Havoc, anybody? You know you want to see Jon Moxley hit somebody with a pumpkin wrapped in barbed wire.

Update: All Elite Wrestling sent out a press release for the event, clarifying that Bash at the Beach will in fact be a “nine day fan extravaganza” featuring special events, live music, and TWO episodes of Dynamite, including one filmed on Chris Jericho’s cruise.

MIAMI, FL (Nov. 18, 2019) — AEW today announced “Bash at the Beach,” an unprecedented, nine-day experience for superfans that features two Dynamite shows, a cruise onboard Chris Jericho’s tricked-out party ship, and non-stop entertainment in between. The adventure begins on Wednesday, Jan. 15, when AEW Dynamite takes over the Watsco Center at the University of Miami for a Bash at the Beach themed episode, and continues with Chris Jericho’s Rock ‘N’ Wrestling Rager at Sea, sailing round-trip from Miami to Nassau, Bahamas, on Jan. 20-24.

High-octane bouts with the biggest names from AEW will be filmed from Jericho’s sold-out Norwegian Pearl ship, including the Jan. 22 episode of Dynamite on TNT. The history-making event will be bubbling with exclusive opportunities to meet AEW’s star-studded roster, as well as non-stop wrestling, rock ‘n’ roll, live podcasts, paranormal explorations, talent-hosted activities, autograph sessions, parties and more.

“AEW’s Bash at the Beach events will deliver nine unforgettable days of wrestling and much more from the hottest company in the business today,” said Chris Jericho. “Thousands of the Friends Of Jericho onboard the SOLD OUT ‘Rock N Wrestling Rager At Sea’ will have the experience of their lives, and now millions more will be able to watch AEW Dynamite along with us, as we break out the bubbly together from Miami to the Bahamas.”

Tickets for the Jan. 15 Bash at the Beach show in Miami go on sale this Friday, Nov. 22, at noon ET. Tickets for the show will be available for purchase exclusively at www.AEWTIX.com. For your chance to join the party at sea, sign up for the waitlist at www.chrisjerichocruise.com.