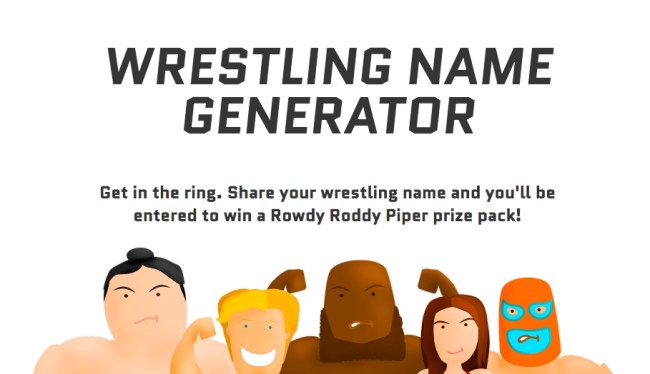 Look, we can all agree that wrestling names are important. Whether you’re a Big Guy, a Beast Incarnate, or just your standard, run-of-the-mill boogeyman, every wrestler needs a memorable name. If you’ve been in search of a fighting moniker for yourself, we have some good news.

To celebrate the release of Rowdy, the new biography of Roddy Piper by his children Ariel and Colt Toombs, Penguin Random House Canada has put together a very cool wrestling name generator, so you can enter your actual name and find out what your in-ring name would be if you were a professional punchkicker. (Or kickpuncher; I would never pigeonhole you without knowing your actual fighting discipline.)

So let’s take this to its logical endpoint: putting in the names of ACTUAL pro wrestlers and finding out if we can get some more badass names for already fairly badass people. Let’s start with a timely one: Goldberg!

Hmmm, I guess he WAS pretty of wild. He didn’t do much crippling of his own, although he did wear some pretty intense knee braces. Okay, we’ll allow it. What about … Bray Wyatt?

Yes. YES. That is appropriately badass and ominous. Of course, he’ll probably eventually have to lose one of those names, given predominant WWE naming conventions. “Making his way to the ring: BLOOD.”
Okay, one last one: The Big Dog himself, Roman Reigns!

Sufferin’ succotash, son. That’s one heck of a wrestlename you’ve got there. Thank you, Penguin Random House Canada, for bringing this into our lives. You can click here to head on over to Penguin and get your own name.
Join Discussion
⇤ Back
Pro Wrestling
The Best Post-Wrestling Acting Careers, Ranked
August 5, 2021by: Jessica ToomerTwitter
Snoop Dogg Did An Awkward ‘Snoop Splash’ Off The Top Rope On All Elite Wrestling
January 7, 2021by: Derrick RossignolFacebookTwitter
Video Of A Coronavirus Vaccine Delivery Had Everyone Making The Same Sports And Wrestling Jokes
December 14, 2020by: Robby KallandTwitter
One Of The Best Pro Wrestlers In The World Is Reportedly Coming To WWE’s NXT UK
October 27, 2020by: Elle CollinsTwitter
NXT Trainees Reportedly Complained To Authorities Investigating WWE Venues As Possible COVID Hotspots
October 23, 2020by: Elle CollinsTwitter
Wednesday Night’s Alright: Going Full Rat Pack
October 22, 2020by: Elle CollinsTwitter
×