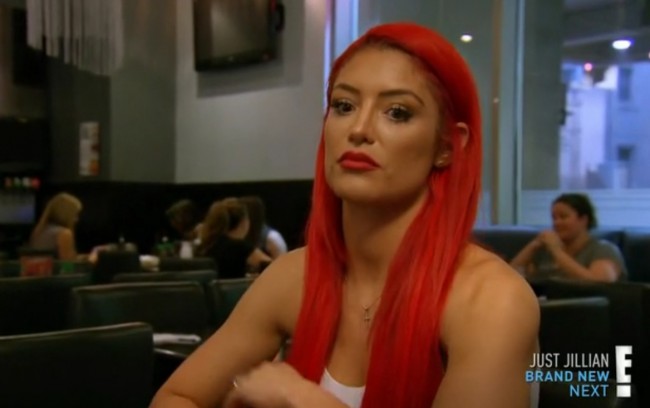 Hey guys! Last week almost saw your faithful recapper end up in the hospital, so we lapsed a little. But don’t worry, we’re not gonna leave you high and dry and bereft of Total Divas shenanigans. If you missed what happened in episode 3, you can catch up here. Either that or just pretend the entire existing cast re-enacted that one song from Hairspray and they all secretly wish Mandy would get run over by a moving van. Half of that is probably accurate.

Shares, likes, tweets, and the whatnot are always appreciated. Be sure to use one of these handy buttons, because social media isn’t anywhere near as dramatic as this show makes it out to be:

This week on Total Divas: Nikki’s got a new femmespiration, Foxy’s got a new boyfriend, and mama’s got a brand-new bottle of DayQuil. Let’s Total some Divas y’all.

Nikki and Brie are in Monterey for a Best Buddies Challenge charity event. Best Buddies is an organization that helps people with intellectual and developmental disabilities integrate into the workforce as well as other leadership opportunities. Nikki is excited because they’re participating in a 15k bike ride on Team Maria. The Maria in question is Maria Shriver, and Nikki excitedly points out that she’s a Kennedy. Nikki will later in the episode describe her personal style as “Marilyn Monroe meets Jackie Kennedy,” which probably isn’t awkward to bring up around a member of the Kennedy family at all, right? Maria’s also the ex-wife of WWE BFF Arnold Schwarzenegger, so I guess awkward is just the theme of the night.

Divorce or none, at least Maria got to use Arnold’s connections to land that sweet gig in Alien vs. Predator:

It turns out Maria’s actually an accomplished public speaker. Nikki is all about being empowered and fearless (or at least that’s what her boob slogan leads us to believe), and wants to channel the inspiration she felt seeing Maria address a crowd into a speaking engagement of her own. As a reminder, here are the Bellas delivering a promo:

While Nattie doesn’t do much this episode, what she does do is kinda great. Here’s her proudly showing off her Tyson Kidd action figure that she pre-ordered to Cesaro:

He tells her he’s already had his for like, ever, y’know, because they’re BFF and TJ might love Cesaro more than he loves his own wife. It’s okay, Nattie. We all love Cesaro best. Despite your best efforts, it’s really nothing personal.

I know Nikki Bella is the star of the show, and I am personally weirdly fascinated by Eva Marie’s husband, but the only part of Total Divas that actually matters is Cesaro showing up to ether Nattie’s marriage whenever he can.

Meanwhile, over at Team Red & Gold’s apartment, new girl Mandy and slightly older girl Eva Marie decide that making some eggs would ‘be bomb.’ They can’t figure out whether or not their stove is electric or gas:

Okay, I know there are a lot of carefully constructed situations on this show, but I think this is the first time I’ve ever wondered if they’re on the show just so that production can keep an eye on them without full-on telling them they require adult supervision at all times.

It’s the day of the 15K bike ride, and Nikki already has an opportunity to do some public speaking and fire up the crowd before they murder their legs in the name of charity. Nikki admits that she’s actually afraid to speak in public because she’s worried people will make fun of her. I…guess that’s fair, I’ve already made fun of her once and she hasn’t even stepped up to the mic. She predictably freezes up in front of the crowd, leaving Brie to take the reigns. Oh, Nikki, no. Nobody wants that.

Foxy’s got a new man in her life, and Paige and Rosa are worried that he might be sort of a sketchbag. Alarmed at the fact that he’s letting his ex and her children stay in his house while they get back on their feet, they convince her to do a background check on him. I mean, that’s totally a normal thing to do, right? Rosa did it once and it turned out that her beau was already married. Rosa’s life is nuts. Foxy shells out a few bucks, forces Paige to do math in her head (yo I thought you guys were friends, ew), and discovers DUM DUM DUM – he’s been lying about his age. This may surprise you, but this man is 50 years old:

Holy shit, I’m as shocked as you are.

Nikki decides to face her fear and takes on a public speaking engagement. Instead of encouraging her sister, and being proud that she’s willing to set challenging goals for herself on the way to becoming the person she wants to be, Brie…tells her to put her tits away so people will take her seriously. Oh. Oh boy. Oh that’s a thing they thought was a good idea. Wait, let’s take a peek at the production credits on this series:

Foxy has decided to confront her 50-year-old still-bow-hunts-in-the-year-of-Sasha-Banks-2016 boyfriend dressed in pants stolen from the set of A Very Brady Sequel. It goes about as well as you think a lady confronting her lying-ass boyfriend on a reality show would go. You know it’s serious because we get to see the lower half of a production dude’s body. When you see the relaxed-fit jeans of someone who clearly didn’t mean to ever appear on TV, you know shit’s going down.

Foxy continues her streak of amazing choices in lower body apparel by wearing babydoll shorts to hunt an armadillo in her backyard. I have to admit, I much prefer “crazy Alicia Fox stalking wild armadillos in her backyard and getting terrified by snakes” than “crazy psycho hosebeast Alicia Fox is weird and selfish and takes it out on everyone in her life,” but that doesn’t seem to be the story arc she’s getting this season. Sadly, more on that later. The girls get a delivery and excitedly think it’s food, but are disappointed to find that half-century Darryl has sent Foxy flowers to apologize. Shoulda sent food, bro. I’ve never had a boy send me flowers, but I HAVE had one send me food, and listen: that guy got so laid. And I definitely didn’t threaten to kill him via voicemail. You never leave an evidence trail like Rosa, jeez.

I think we can all agree that Brie is being pretty sh*tty to Nicole here, but I think we can ALSO agree that this show desperately needed a dramatic cape-shopping flashback scene. Just when I feel like you’re losing me, Total Divas, an empowering statement piece cape just pulls me right back in.

Mandy and Eva Marie managed to make their eggs without burning down the entire state, which means we get to soldier on with their story. If you’ve felt that Mandy was kind of the low-rent Eva, discovering that she has her own low-rent Jonathan probably won’t help change your mind:

Out at dinner, Mandy reveals that she’s gone behind Eva’s back to find out what all of the drama was between her and the other girls. Oh Mandy, if only there was some kind of documented record of the Divas’ past issues with Eva Marie you could handily consult instead of making her feel like you didn’t trust her enough to be upfront with her. Eva Marie’s pissed, and she immediately goes into low-power mode and cold-shoulders Mandy for the rest of the night. Fake Jonathan, like the real Jonathan, ends up being the voice of reason for his Pro Wrestling Real Doll:

Why not go right to her? That’s judging someone. That’s doubting somebody. You could have just simply pulled her aside and said ‘Hey, what’s that all about?’ You know, you’re coming off of Tough Enough. You didn’t win, right? For all she knows you’re terrible. You may have just skated by because of your good looks, maybe you don’t know how to wrestle. This girl knows nothing about you, and now she’s talking about maybe partnering up with you? Obviously the girl’s been betrayed in the past amongst everyone. She gave you the benefit of the doubt.

Whoa, that makes way too much sense. Keep talking like that and I might actually retain your real first name, dude. Mandy apologizes, Eva Marie accepts because they’re out of time for this episode, and they both initiate PROTOCOL HUG:

Nikki’s about to give her first talk as an empowered female speaker, but she doesn’t bring a cape. This is some straight up bullsh*t, but whatever, we’re going with it. She’s understandably nervous, a situation not helped by the appearance of Ted Cruz cosplaying as Mrs. Doubtfire:

Unbeknownst to her, Brie is in the middle of getting the verbal (WWE) SmackDown (every Thursday night on USA!) from her mother over slutshaming Nikki. Brie realizes that female empowerment doesn’t mean moderating other women’s bodies, and calls her sister to wish her luck before her speaking engagement. With the power of Twin Magic and John Cena’s gigantic, comforting hands, Nikki goes on to deliver at the very least 30 seconds of a recorded speech. The day is saved!

But seriously, John Cena’s hands are f*cking huge in a way that makes me slightly uncomfortable:

Grab a glass of water, stretch your legs, and call your loved ones to tell them you miss them and will be home soon, because next week on Total Divas is…coming up later today!