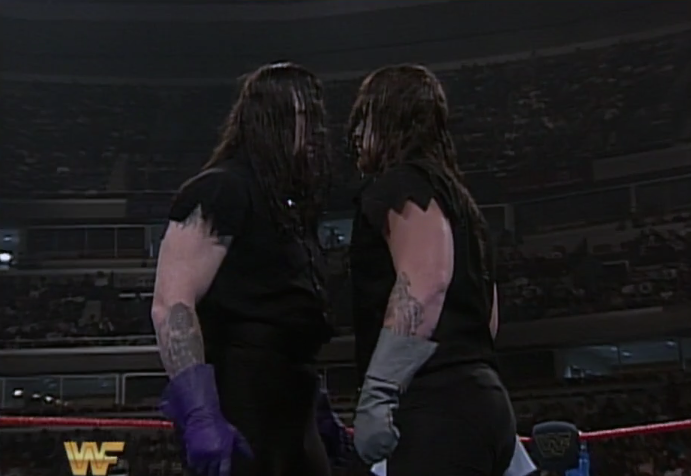 The Undertaker is the greatest gimmick in WWE history. Almost 25 years ago, Vince McMahon had an idea to turn Mean Mark Callous into a half-dead wrestler obsessed with graveyards. Thanks to McMahon’s brilliance and Undertaker’s sheer talent and charisma, The Undertaker has withstood the test of time and gone through drastic overhauls through the course of his Hall of Fame career. Amazingly, like any wrestler, Undertaker has withstood some absolutely insane moments, from the campy to the melodramatic to the surreal. Here are some of those moments:

This has everything, kids: lightning, burials and kidnappings. Let’s enjoy these crazy moments while celebrating The Undertaker’s 50th birthday. Yes. Fifty.

Giant Gonzalez Puts Undertaker To Sleep: I don’t know if there was another match that ended via chloroform… well… here we are. This match is really an asterisk in The Streak, as it ended with Undertaker winning via disqualification against a guy who had on a body suit with pubes painted on them. This was during the era of Undertaker just wrestling guys as big as humanly possible because YOLO. This was possibly the worst match of The Streak, and it ended as awkwardly as you can imagine. Before I move on, I want to say my piece: The Steiners vs. The Headshrinkers from WrestleMania IX was the match of the night by a mile. But I digress.

The Impostor: Some of these moments were great by sheer luck or Undertaker’s charisma and buying into the storyline. This, though, had one person to thank for its greatness: Leslie Nielsen. The story here is that Ted DiBiase had paid off The Undertaker to join his Million Dollar stable, but it was revealed that he’d actually gotten an impostor Undertaker the whole time. Gasp! So where was the real Undertaker? That was up to Mr. Naked Gun himself to investigate. The match itself was awkward and horrible, but the vignettes of Leslie Nielsen being hilarious and trying to find the real Taker made it all worth it.

Buried Alive: Undertaker vs. Mankind was one of the greatest feuds of all time. Their run in 1996 rejuvenated Undertaker’s career and really changed the course of wrestling. Undertaker went from freak show gimmick match guy to a multifaceted character with a human side. The feud also allowed him to have great matches for the first time in his career and added years to his gimmick. The great thing about the feud was that Foley and Undertaker made crappy gimmick matches great, including a Boiler Room Brawl match and this Buried Alive match. The match ends when all the heels team up and attack Undertaker — which was how most of his gimmick matches ended for some reason — and bury him alive. If that wasn’t enough, lightning (more on that later) hits the grave and we get The Undertaker’s hand coming out like some sort of horror flick. Lulz. 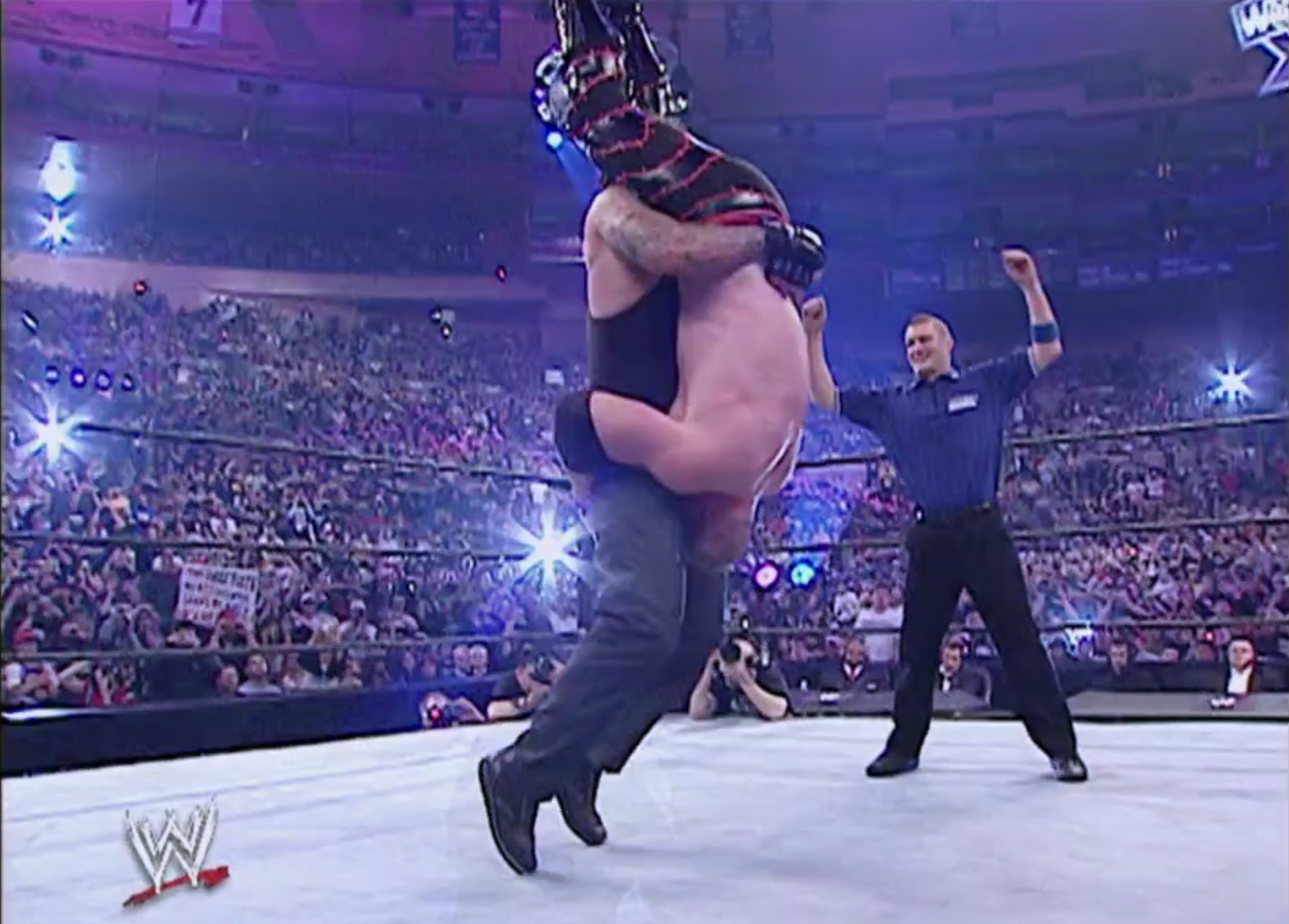 Everything Involving Kane: Here’s the backstory behind Kane and Undertaker: They’re brothers, and Undertaker murdered their parents by setting their house on fire. He thought Kane had been dead since then, but Kane returned to extract revenge by… costing The Undertaker a match against Shawn Michaels. We then learned that Paul Bearer is actually Kane’s real daddy. Got all that? Is this the most melodramatic wrestling angle of all-time? Why did we love the Attitude Era again?

Kane Sets The Undertaker On Fire: After Undertaker’s Casket Match with Shawn Michaels, Kane dragged Undertaker’s casket to the ramp and set it on fire. With Undertaker supposedly in the casket. Dying. On fire.

The Time He Kidnapped A Woman On National TV: Here’s a thing WWE does that’s absolutely hilarious. They have angles where wrestlers kidnap people, then bring the kidnapee to the ring to carry out their devious schemes. This kidnapping featured Ministry of Darkness Undertaker kidnapping a wide-eyed, younger Stephanie McMahon for some sort of demonic wedding. Did he take her to a basement to carry out the wedding? Some far-off dungeon? Nope, right there in the middle of a wrestling ring, where he tied her to a cross for a sacrifice-type-thingy. Naturally, Stone Cold Steve Austin came in for the save because, again, Undertaker was kidnapping someone and taking her to the goddamn ring in front of thousands of people. The video actually makes me squeamish because Stephanie on the cross on the ring ropes just seems to uneasy. It’s like she’ll fall over the ropes and land on her head. I don’t want to watch this anymore. Please, let’s move on.

Undertaker Hanged A Guy: As we continue through the dark ages of Undertaker’s WrestleMania matches where every match sucked incredibly, this one opened WrestleMania XV, and it’s probably the worst Hell in a Cell match of all-time (does the dog kennel match count?). It’s a shame because Big Boss Man was an underrated worker, and Undertaker is Undertaker. But Boss Man was past him prime, and Taker was battling injuries, so the match stunk. However, the final touch came when Undertaker strung Big Boss Man up by his neck and hanged him. Wait, that’s not the final touch. The final touch is Michael Cole asking if this is symbolic of something. Yes, Michael Cole. It is.

Undertaker Kills Paul Bearer: So, Undertaker vs. The Dudley Boyz in a handicap match was once the main-event of a WWE pay-per-view. That sounds scarier than anything Undertaker has ever done to his enemies. This particular match was for Paul Bearer’s life. Undertaker, after beating the Dudleys, turned on his manager by burying him in cement. Paul Bearer has died on camera more times than anyone else in TV history. Probably. Maybe.

Lightning Effects: Undertaker has always had special effects as part of his repertoire, but nothing is more ominous and outrageous than Undertaker lightning. The lightning is a special effect from the arena, so I’m assuming that his power comes from his ability to do a sound and light check before the show starts. Honestly, though, I can’t hate this too much because the lightning used to freak me out as a kid. And what’s a testament to Undertaker’s gimmick is the fact he’s still making fake lightning cool in 2015.