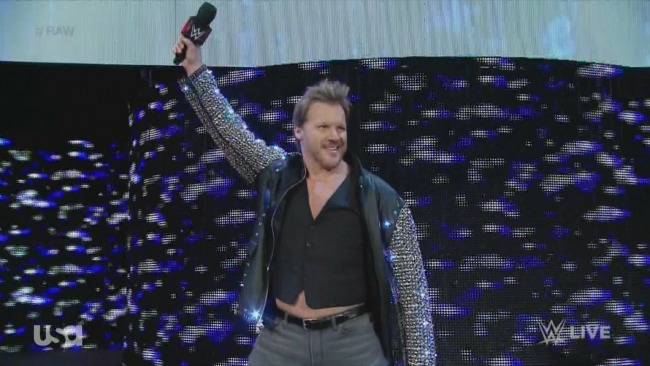 Chris Jericho made his semi-annual return to WWE on Monday’s episode of Raw, interrupting The New Day and announcing that he’ll be competing in the 2016 Royal Rumble. Online critics (let’s call them “The IWC”) (ugh, I hate those guys) had two major problems with the moment:

1. Jericho returns all the time, so it’s not really a surprise. It’s just, “here’s Chris Jericho again.”
2. Jericho challenged the mighty “tater tots” as the dumbest thing said on WWE TV in the past few months by calling The New Day “rooty tooty booties,” and getting the crowd to chant it.

On the latest episode of his podcast, Jericho addressed both of those points. In short, his response is, “shut up, nerds.”

On his regularly occurring surprise returns:

“It’s not just a one-time thing. I am back, baby! I’m back for the attack, like Dokken always said, and I’m in the Royal Rumble, which is now for the World Heavyweight Championship, so maybe I’ll become a seven-time world champion. And I will say this: it’s going to be a long, wild ride. I’ve got a lot of plans, a lot of things going on. I love so many things about the wrestling business and I love all of you fans, but man, some of you complain a lot, which is my favorite part. It’s like, ‘Oh, Jericho is re-re-re-re-returning. How many surprise returns is Jericho going to make?’ As many as I want, baby, because I still love doing it and I still have fun doing it.”

Totally fair. We do complain a lot — with good reason, and a lot of times with absolutely no reason whatsoever — and a guy who’s accomplished as much in the wrestling business as Chris f*cking Jericho should be able to come and go as he pleases. Right? That’s what WWE legends do. They go away, start showing up irregularly, become part-timers, take advantage of WWE’s love affair with part-timers, and just kinda continue into infinity.

“Why, because I started a ‘rooty tooty booty’ chant? You mean that’s not ‘if you smell what The Rock is cooking?’ level of comedy? The thing is, it works! It’s fun because it’s The New Day. Their whole gimmick is based around being goofy and I knew that I could get people to chant ‘rooty tooty booty’, so if you weren’t there and you didn’t like it, tough luck because the people in San Antonio loved it! … If that’s bad humor and you didn’t laugh, oh, I’m sorry. Go watch some Kierkegaard or something like that. Go watch some Peter Sellers movies or something because I thought it was funny and it was a catchphrase that was chanted throughout the show and they’ll probably make a damn t-shirt of it.”

Jericho’s right. I should go “watch some Kierkegaard.” After that I’ll go listen to some paintings and read a Star War.

What’s disappointing for me (as a guy who loves Being There) is that Jericho was once the antithesis of bad wrestling humor. He was the lightheartedly anarchic guy who’d work Spinal Tap references onto random episodes of Nitro, spend an entire commercial break reading off a list of moves he knows or spike up the front of his hair just to be weird. Maybe that’s what a decade of WWE comedy writing does to a man, though. I mean, this is the same Jericho who got the Planet of the Apes to hit Stephanie McMahon with a pie, so, you know, we could be doing a lot worse than rooty tooty booty.

Here’s the return segment, if you missed it. When you’re done, go watch some Descartes.