WWE has a way of giving us the dream matches we’ve always hoped for. Sometimes they’re magical (think Hogan vs. Rock at WrestleMania 18). Sometimes they’re … well … something else. The matchup between Shawn Michaels and Hulk Hogan at SummerSlam 2005 was a bizarre clash of two of wrestling’s biggest egos. What resulted was one of wrestling’s weirdest and most controversial matches ever and an unbelievable story of two men who learned to hate each other over the course of a month.

So let’s take a look…but first a bit of history.

By the time Shawn Michaels made it to the WWF in the late ’80s, the company — and wrestling as a whole — was firmly in the hands of Hulk Hogan. Hulkamania had run wild and wouldn’t stop for years. While Michaels and his tag team partner Marty Jannetty were tearing it up in the late ’80s and early ’90s, they were never really seen as main event-level talent in the company. That space belonged to Hulk Hogan and musclebound guys who “looked the part.” However, the workhorses were gaining steam. By the early ’90s, Hulk Hogan was wrestling halfway through the house show cards while teams like The Rockers, The Hart Foundation and The Brain Busters were actually main eventing them. But there was no way that would translate to TV or WrestleManias. The Hogans, Warriors and Earthquakes of the world were going to dominate the top spots while the little guys would put on high-quality matches halfway through any pay-per-view.

Then some serendipity happened — namely a steroid scandal that would rock Vince McMahon and his company. Soon thereafter, Hulk Hogan would leave wrestling. The loss of Hogan combined with the steroid scandal forced the WWF to look at some of its smaller wrestlers as potential main eventers. Bret Hart would be the first smaller workhorse to take over the main event position. Shawn Michaels was close behind, winning the Royal Rumble in 1995 and becoming an official headliner.

Meanwhile Hulk Hogan would go to WCW with his American Hero persona before leading the NWO into the new millennium.

Michaels and Hogan would never cross paths during the Monday Night War, they would both be known as much for their backstage politics as they were for their work on camera. In WCW, Hulk Hogan held a “creative control” clause in his contract which would allow him to veto or suggest any stories to his liking. He spent his time in WCW manipulating the company to put himself in the most favorable positions at all times. His machinations played a huge role in WCW’s eventual falling ratings and losing the Monday Night War.

While Hogan was running rampant backstage at WCW, Shawn Michaels had formed a Kliq with Kevin Nash, Scott Hall and Shawn Waltman (who’d all soon join Hogan in WCW), as well as Triple H. Michaels would refuse to lose to certain wrestlers. Instead of losing matches, he worked to forfeit his titles: forfeiting tag titles he held with Stone Cold, his Intercontinental title and most infamously his World title before WrestleMania 13 due to an injury some still believe he feigned. Michaels was known as much for his backstage politics as Hogan.

In fact, it was believed that Michaels was going to jump ship to WCW after a backstage fight with Bret Hart, but one of the things that kept him from going was the idea of having to coexist with Hulk Hogan.

Fast-forward to 2005 and both Hogan and Michaels were in WWE in vastly different roles as the ones they held prior. Michaels had found Jesus and was less concerned with political power. He essentially did what he was told and put on classics most times he went to the ring.

Hulk Hogan was much less a political force by 2005. He was too old to win the title and his appearances weren’t going to make or break Raw ratings or pay-per-view guys. Hogan was merely a special attraction at this time, so he couldn’t dominate backstage like he did in his prime, even though his WWE contract also had a “creative control” clause in it, too.

When it was pitched to Shawn Michaels that he’d wrestle Hogan at SummerSlam 2005, he proposed that the match just be a legend vs. legend “I just want to see who’s better” gentleman’s duel. Michaels hadn’t wrestled as a heel since his D-Generation X days of going off script and laying into his opponents. Hogan, though, had other plans.

“I was told, ‘Terry would prefer if it was classic heel vs. babyface…We want you like you were in ’98.’ You gotta be kidding me. That guy would eat him alive!” — Shawn Michaels, Heartbreak & Triumph (documentary)

So on Raw, Michaels recruited Hogan to be his tag team partner only to turn on him at the end.

Hulk Hogan, who was probably concerned about getting a mixed fan reaction, wanted Michaels to be a full heel, then Hogan would go into SummerSlam as the cheered hero. Vince McMahon, though, is a big fan of causing real-life resentment between wrestlers, so he helped egg Michaels on into being as much of a heel as possible. McMahon would repeat the phrase “Terry’s business” to Michaels to encourage biting promos that bordered on “shoots.” Like this…

While Michaels would get approval for these promos from McMahon and even Hogan himself, once they aired, Hogan would complain about their content. Michaels would insist that he asked for Hogan’s approval before and after each promo and would be told to his face that they were fine. However, Hogan would go to management and insist that Michaels had gone too far. All to insist on an ending that would benefit Hogan.

From the moment the match started, fans could tell something was up. Michaels bounced around the match like a maniac from the opening bell to the ending. In a testament to how great of a wrestler Michaels was, the match still ended up being one of Hogan’s best matches of all time. The controversy, though, came from the way Michaels was “overselling.” He made wrestling look “fake” by acting like each Hogan punch sent him into backflips and convulsions.

The ending was the money shot, though. Hogan gave Michaels his infamous big boot. Michaels responded by hitting the deck, getting up and doing a front flip onto the mat. It’s one of the most insane moves I’ve ever seen. Diehards complained that the move was unprofessional and exposed the business. Hogan responded by milking the crowd and taking his time to leg drop Michaels for the win.

Michaels objected to the idea that Hogan — who was older and part-time — should win. Hogan insisted that it was McMahon’s call for him to win. There’s dispute over that detail (not surprising considering Hogan’s knack for embellishing the truth). Add to that the frustration of Hogan complaining about the build led to Michaels’ in-match insurrection. The match has become infamous for Michaels’ theatrics. Some say that Michaels never really changed from his late ’90s days and just hated losing. Michaels insisted that Hogan’s lack of professionalism caused him to act like he did. To Hogan’s credit, he’d lost a lot of matches since returning to WWE, losing to Rock, Brock Lesnar, Undertaker and others in big moments. So he had lost some of his desire to win every time.

Michaels and Hogan have two very different sides of the story, of course. Michaels insists that he and Hogan were supposed to wrestle three matches, trading wins. But he says Hogan backed out before the SummerSlam match. Hogan insists that Michaels’ lack of professionalism caused him to back out of the rematches. 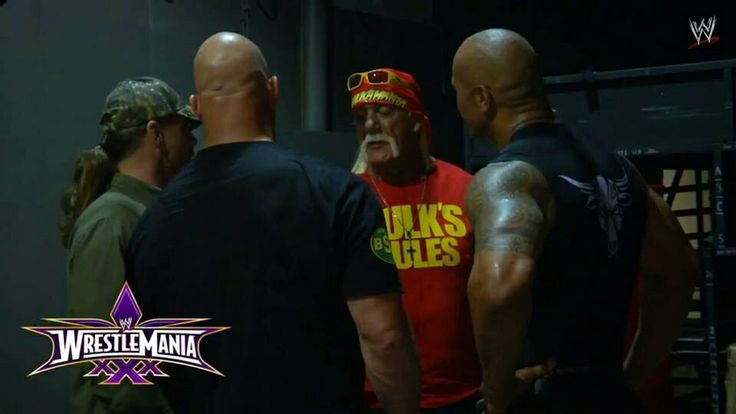 Most wrestling fans remember the match itself. But not everyone remembers what happened the next night on Monday Night Raw.

Michaels cut a tongue-in-cheek promo about how Hogan was “cat-like,” “agile,” and “nimble.” He did all of this with a smirk on his face, as if to tell the crowd “yeah, this was all scripted.” He basically railed against a booking decision live on Raw. Hogan says this is what ended any chances of rematches. Michaels says Hogan had backed out of rematches already.

Since that SummerSlam match, it appears that Hogan and Michaels have patched things up somewhat. They’ve done various segments on Raw together and were even backstage at WrestleMania 30 seeming to get along. Maybe bygones are bygones. Or maybe they get along as long as nobody has to actually wrestle and butt heads.

Regardless, the SummerSlam match is a fascinating look at what happens when egos clash and it spills out into the ring.