Racist Wrestling Gimmick Of The Week: The Life And Times Of Charles Wright Pt. 2 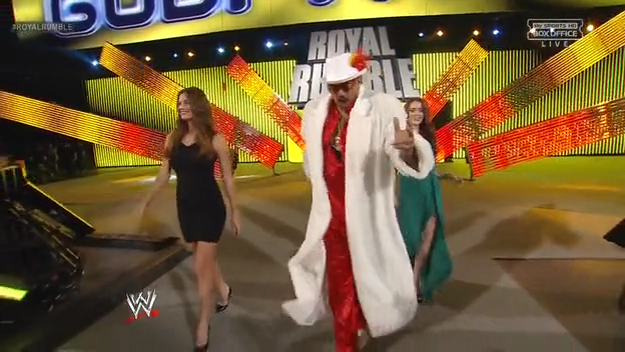 Last time we were here, we got acquainted with Charles Wright’s second WWE character, Kama, who, for no other reason than being black, stole Undertaker’s urn and had it melted down to a gold chain. But if you follow Wright’s career, then you know that he eventually became Kama Mustafa, joined the Nation of Domination also known as The Faction Where All Black People Went and somehow became a pimp.

The Godfather was basically the most Attitude Era character of all-time. Here’s how:

1. Catchphrases were, as the kids say, on fleek during the Attitude Era. Most guys went to the ring and tried to come up with the most memorable phrases for people to sing along to. Godfather’s phrases made zero sense. It was just a collection of jive talk that the audience repeated because YOLO. “Roll up a phatty for this pimp daddy” and “Pimping hos nationwide” and whatever the misogynistic version of Konnan’s nonsensical No Limit slang is. It didn’t matter what was said, as long as it was fun to repeat.

2. He never won, and his matches sucked. I don’t think Godfather ever won a match… I mean, I know he won the Hardcore title, but he was basically a jobber. And it didn’t matter. You think wins and losses are irrelevant now? The Attitude Era wasn’t exactly abiding by the PWI wrestler rank, either.

3. He was horrible to women.

Godfather wasn’t a pimp in the remotely cool “I wear a mink coat and make jokes about Rosie O’Donnell’s d*ckhole underwear” way. No, he’s a literal pimp who manipulates women to f*ck guys for cents on the dollar under the fake guise of protection. They’re terrible, terrible people.

And he was one of the most over babyfaces in the company. Not only does this make a little sense from a moral standpoint, it also spits in the face of wrestling history, as any black guy running around with white women used to be top-level heel heat. But I guess the crowd loved boobs more than they wanted to boo a black guy with white women, so… progress…?

Godfather was Attitude Era Santino, and Charles Wright might have deserved better. Then again, he called women hos every Monday, so maybe not.

Godfather was also a pivotal part of what’s in the argument for the most racist segment in RAW history. And that’s saying a lot.

Here we are. I was in middle school when DX went on RAW and impersonated the Nation of Domination, and I admittedly thought it was pretty funny. Then, I developed a grown-up brain and learned what was sort of not OK to do. This was not OK to do.

First of all, blackface is bad. Not only does it pull from a history of horrible moments that degraded black people, it’s also incredibly unnecessary. There’s literally never a time when blackface is needed to drive home a point. Just look at the DX version of the Nation: One guy has a cigar. One guy has a painted-on eyebrow. Another has the goddamn name Mizzark on his vest. And another one is shaking his head to mimic a signature move. They’re not exactly cutting cryptic Bray Wyatt promos here. The blackface is never integral. If it is, then do a better impersonation.

As for The Godfather, Billy Gunn’s impersonation was the least offensive. All it had was the obligatory jive-talking voice used to impersonate black people. Meanwhile, X-Pac made Mark Henry sound like Fat Albert because of course he is. Godfather just had the lame guy being unfunny.

On the flipside, you can look at this exchange between Godfather and Kurt Angle to see how these ridiculous gimmicks should work; make it known how insane the character is. Play it as insane as it is. Don’t pretend this is a normal, OK thing. Angle was gold.

Overall, Charles Wright was a charismatic wrestler who totally bought into every character he was asked to play. He never, though, was really given (or demanded) a gimmick that could push him to the main-event. He was, though, one of the most popular mid-card guys of the Attitude Era, which is no small feat. So, who cares if he made women look worthless in the process… right?