The 16 Greatest Ultimate Warrior Facepaints, In Celebration Of His Birthday

Today would have been the 56th birthday of Hall of Famer and former WWE Champion The Ultimate Warrior. He’s been gone for over a year now, and it still doesn’t seem right. Warrior should be in Australia or Austria or wherever, delivering crazy rants, uploading confrontational YouTube videos and showing up to local shows to clothesline the Honky Tonk Man.

Warrior’s one of those guys we’ll never forget, so in celebration of his birthday we’ve gone back and ranked our 16 favorite Ultimate Warrior face-paint combinations. Check out our choices and let us know your favorites in our comments section below. Here’s to Destrucity!

Warrior hailed from Parts Unknown — if you’ve ever driven through rural Oklahoma, it’s probably somewhere in there — but he wasn’t afraid to get patriotic and rock the red, white and blue. This would rank higher if his former tag-team partner hadn’t done the motif so much better for the competition. Still, though, if you’re in a war, make sure you’ve got the insane guy who can’t stop running and throwing people on your side.

If you ever wanted a picture of Warrior looking like 1970s Bruce Jenner, here you go. Occasionally Warrior would go a little heavy on the black outlines and accidentally give himself comical eyebrows. This is one of my favorite Warriors because it forced him to be expressive in a way he never was. Sure, Warrior could growl and snort and be angry and threatening, but could he look like an old person from an anime? YES, yes he could.

Imagine an alternate WWE in which Kane wasn’t raised in shame in a funeral parlor basement, and instead grew up on Venice Beach hanging and banging with the locals. If that doesn’t work, imagine an alternate WCW in which Warrior joined the Wolfpac instead of Sting. Either of those is hilarious, right?

Sometimes Warrior would get tired and not want to draw cosmic birds or whatever on his face, so he’d go down to the boardwalk and get one of the kid facepainters to draw his log on his cheek. I go back and forth on this look because it humanizes him a little, and I’m not sure I want the Warrior to ever seem human. If anything, he should be wrestling on robotic stilts or whatever and entering via space ship.

One cheek not enough? Drop the carnival face-painting logo on BOTH cheeks, until you look like the time Fabio was riding a roller coaster and got hit in the nose by an errant bird.

I’m not sure if Warrior ever sat down and said, “OK, this is where I want the colors to be and here’s what I want them to represent,” but sometimes his scheme would get holiday-specific and he’d end up with paint like this. He’s not explicitly drawing a spooky pumpkin on his face, but psychologically that’s all I can think of.

If this one got you accidentally emotional, I apologize. During his last appearance on Raw — the day before he passed away — Warrior got nostalgic and put on his “face paint” in the form of a novelty plastic mask. At the time it seemed fun and weird in the best kind of Ultimate Warrior way. Now it feels more like a guy saying, “this is the last time I’m going to see you and I can never really be this guy again, but let’s forget that and live in it for a moment.”

I’m glad we lived in it for a moment.

Warrior’s face-paint logo is iconic and best when it stays simple, but we’ve got to give it up for his more unnecessarily-complex attempts as well. Sometimes he’d show up looking like an artist’s attempt at a hologram, without the technology to actually paint holograms on human skin. This look would be higher if the black around his eyes didn’t shrink his facial features and make him look a little dopey. Also, give it up for his hair in literally every photo ever.

I almost called this “The Jeff Jarrett” because it reminded me of his gear. As we learned when he started coloring the Intercontinental Championship to match his outfits, Warrior could KILL a white look, probably because the rest of him was so oddly colored. You’re wearing neon explosion patterns, your skin is burnt sienna and your hair’s the same color as your skin. A well-placed white can really pop.

This is probably pretty close to how you picture the Ultimate Warrior in your head. Even if you can’t remember or draw his paint or gear, you remember him as a throbbing human muscle trapped in a tight wrapping of NEON AS F*CK. Warrior is the human who came closest to approximating a box of crayons, and I say that in the most complimentary way possible.

It reminds me of The Boogyman, I don’t know.

It’s never been easy to understand the mythos and origin of the Ultimate Warrior, especially if you’ve listened to Warrior’s explanation or read the comic books. “Insane guy who breathes heavy and hits you” is as close as most of us got, but I love the looks that suggest a deeper backstory. Instead of looking like Sting on Bane venom, this version of Warrior looks like an ancient tribal warrior.

Not because of what he wore in WCW, but because it looks like the late-era WCW logo. The dangley earring really makes it. This is what I imagine it would be like if those rumors of the original Warrior dying and being replaced had been true, and he’d been replaced by Lorenzo Lamas.

The perfect combination of The Hologram and The Boogeyman, the Trapper Keeper is perfect mid-90s Warrior. Great love for his hair again, as well, because mid-90s Warrior got a little too close to looking like a monstrous version of Jessica Simpson. Compare and contrast this look with former WWE Diva Kaitlyn’s Ultimate Warrior Halloween costume.

This look answers the question, “what if Danzig was a Navajo warrior?”

Take a few minutes to sit and stare at this photo. It’s the “Rock wearing a turtleneck and a fanny pack” of Warrior’s looks. The logo is simple and iconic, but nothing else is. If Ben Stiller ever played a crazy ’80s wrestler in a movie, this is what he’d look like. This looks like a guy I’d have to fight in Streets Of Rage. Love love love it. 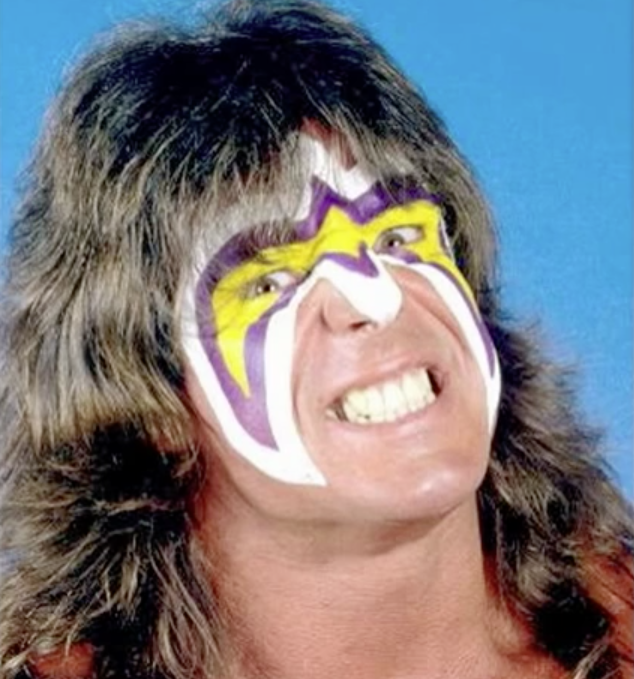 And finally, my favorite Warrior paint ever. Simple, classic, colorful but with good use of white. It’s so clean and classy. Purple and yellow are great Warrior colors. He makes them his own. Warrior sort of exists beyond color, and attracts the entire spectrum to himself in splatters. Perfection.