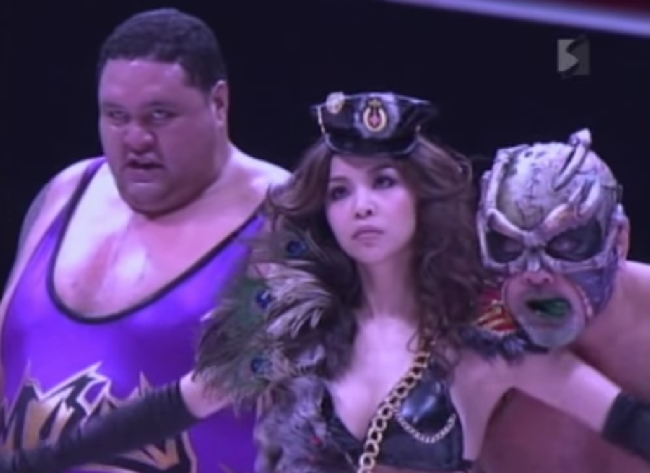 Wrestling is weird. On a base level, the idea that a bunch of barely-dressed people in spandex get in a ring to tell a story by pretending to physically damage each other is an odd concept. Once you move beyond that, and you start to look at some of those stories and the characters who have enacted them, it gets way weirder. After all, the most enduring wrestling character is a dead man who used to make his own coffins, has a half-brother he nearly killed when he burned down the family funeral home as a child, and went through a mid-life crisis where he bought himself a motorcycle and listened to a lot of Limp Bizkit.

One of the things we embrace wholeheartedly here at With Spandex is that there are so many things to enjoy about pro wrestling, and no one style of wrestling is the “right” one. It’s possible to love the technical exhibitions of someone like Dean Malenko just as much as you love a Smiths-loving vegan insect overlord whose friends are animate pumpkins, and who once used an ancient artifact to control a dude until it drove him mad and he started booking Ring of Honor. Now, on a semi-regular basis, we hope to explore that weird side that some may have never heard of, some may have forgotten, or you may have simply blocked all knowledge of it from your mind as some kind of self-preservation mechanism.

Today we take a look at the Japanese promotion HUSTLE, or more specifically, that time the Great Muta’s family consisted of a communism-obsessed model/wrestler and a sumo-sized wrestler birthed from an egg.

And that’s not even the half of it.

HUSTLE was a pro wrestling company founded by Nobuhiko Takada in the “Fighting Opera” style. It highlights the sports entertainment aspect over athleticism and technical wrestling, heavy on gimmicks and fantastical stories (so many lasers!), with less emphasis on the merits of the wrestling itself. The main plot featured the heel General Takada trying to destroy pro wrestling on behalf of MMA, using his Monster Army to battle against the face defenders Naoya Ogawa and his HUSTLE army. The promotion saw wrestlers like Dump Matsumoto, Minoru Suzuki, The Great Muta, Masato Tanaka, Aja Kong as Erica, and Jaguar Yokota come through, as well as characters such as Hard Gay, and eight different colours of “Kamen Hustle.” 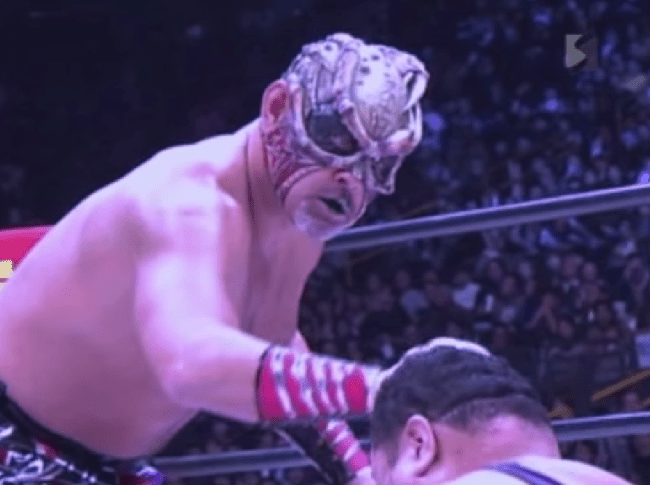 The Great Muta: Now, it’s pretty safe to assume that if you clicked this link you are familiar with Actual Wrestling Legend the Great Muta, but hey, not knowing is okay too! If you’re unfamiliar, that is super exciting because oh man do you ever have some great matches to experience for the first time after this. Spoiler alert: none of the matches featured in this column are any of those. To break it down: Keiji Mutoh is an international wrestling legend known primarily for his work in Japan, the NWA, and WCW as The Great Muta (or Mutoh, depending). He’s one of the first Japanese puro stars to gain international fame, and helped popularize “Asian mist,” an illegal distraction passed down to him from his kayfabe father The Great Kabuki. He has innovated the Muta Lock and Shining Wizard, and yes, when he sprays mist it is acceptable to shout “MUTA MUTA MUTA MUTA ROCKIN’ EVERYWHERE! MUTA MUTA MUTA MUTA MIST IS EVERYWHERE!” …at least I hope it is.

Akebono is an American-born Japanese former sumo wrestler, perhaps known best for defeating the Big Show via koshinage during their sumo bout at WrestleMania 21. His career has seen him move through sumo, kickboxing, MMA, and various pro wrestling organisations such as New Japan Pro Wrestling, All Japan Pro Wrestling (his current home promotion0, Zero-1, Dragon Gate, and, most important to this story, HUSTLE. He is a two-time tag team champion with Ryota Hama, who you may remember from the HAM SLAM/SLAM HAM match against Ethan Carter III at TNA’s secretly-better-than-people-give-it-credit-for Bound For Glory 2014 pay-per-view. In this instance he is known as Monster Bono, which will all make sense (kind of) later on. 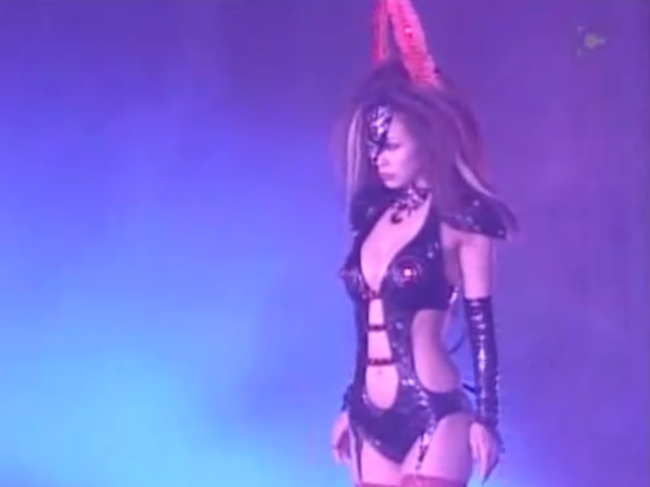 All clear so far?

Here’s Where It Gets Weird…

Remember that Asian mist we mentioned earlier? Here’s where it comes into play. In 2007, Yinling teamed with Tajiri against Muta and aforementioned Hard Gay’s comedy partner Real Gay. After the match, Muta attacked Yinlin, spitting mist into her lady bits and causing her to pass out, because…that’s how that works, I guess. This caused Yinling to get pregnant with an egg baby, because that’s also how that works. The implication is great, because it’s either that Muta’s mist is magical, or he has the right amount of active sperm mixed in that it makes you google enough human sperm survival facts that you’re probably on some kind of watchlist right now (Hi, NSA!).

Family bliss was not to be had, however. Tired of Yinling’s constant belittling and abuse, Bono turned on his her and the Monster Army and formed a face stable. Yinling was obviously mad that he wanted to hang out with his large friends and not do his monster homework, and soon they met in the ring to hash it out. Though they fought hard, Bono came out on top – literally – crushing his mother beneath his weight. In a touching moment, the two reconciled moments before her “death.” This would also end up being Yinling’s retirement match.