Phil Brooks, better known as CM Punk, has stepped away from wrestling and into the world of UFC. Stepping into the octagon is not the only new challenge he’s set out to conquer. After his comic debut for Marvel, Brooks is tackling the weird history of the many curses of the Chicago Cubs for the Vertigo series STRANGE SPORTS STORIES. We spoke to him about his sophomore effort, balancing writing with his mixed-martial arts training, and of course, the Chicago Blackhawks.

With this comic, although you’re a big hockey fan, you went with baseball. You drew from the Chicago Cubs with a few references, including the “Billy Goat Curse.” What led to that?

I’ve been a Cubs fan all my life, you know, and I’ve always been kind of fascinated and interested in sports stories involving a “curse.” There are so many of them. Originally this idea kind of morphed from writing a story about a goalie. If you know anything about hockey you know they’re probably the most superstitious people ever. And there was Turk Wendell, who’s a wacky, superstitious pitcher in the major leagues, so I just kinda started spitballing from there. My personal feelings are that some curses are just so silly, but you know, maybe there’s something to ’em. That’s just kinda the genesis of where it all began.

Do you have any sports superstitions? ‘Cuz I know when it comes to the playoffs I get super irrational about things even if I don’t believe in them the rest of the time. Do you have any that you’ve gone through in the past?

I’m not superstitious. I’ll break mirrors all day and you know, the whatnot, but when it comes to hockey — and I just think it’s because my desire for the Hawks to win is so strong — I have to. There was a time in 2013 when we won the cup, my sister had gotten me a Keith — Duncan Keith, he’s my favourite player — a Keith jersey. But it’s not an official NHL jersey, like she must have gotten it in Chinatown, it’s a bootleg jersey. Like the Indian head isn’t quite right…if you’re a fan, you can tell, you know? But every time I wore it at a game they won, so I was like “I have to keep wearing this jersey! And it was almost the bane of my existence because I had all these people giving me sh*t abut like ‘oh, you’re CM Punk and you can’t even afford an official jersey’, stuff like that. And I would go I don’t give a sh*t about that. It was a gift from my sister, so I don’t care where it came from, or what it looks like, and what status of jersey it is — they win when I wear this thing! And I always had to walk in to the United Center or whatever way I got there, carrying it in my hand and put it on after I entered the building. And there are a few others, but they’re all kind of silly like that. 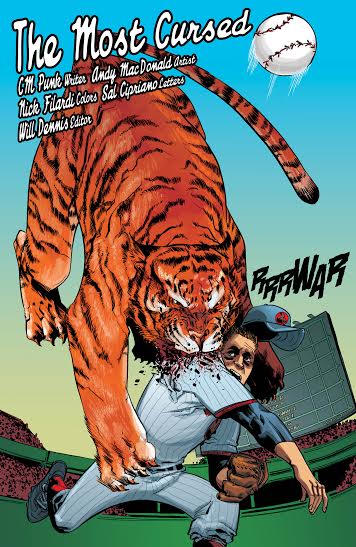 Well, the playoffs do funny things to you. Now, when you worked with Rob Guillory on the Thor Annual, you said it was a fairly easy process for you because you were already friends. What was it like going into your second comic working with Andy McDonald on this one?

It was great! He was recommended by Will Dennis, my editor, and you know, I was familiar with his stuff. But once I kind of filtered through all of the pages he gave me I was like ‘yeah, here’s the guy for the project.’ And I don’t know if that happens with other writers, but I had a vision of what the pages should look like, and when I saw his artwork, it was just perfect. I wanted it to be almost like you were looking at a baseball card — a little bit cartoony, but not quite. I didn’t really have too much interaction with him except for just being like ‘whoa, that page looks awesome dude, keep up the good work,’ stuff like that. But it was smooth sailing.

Are there any artists you’d like to work with in the future? Like, you keep saying you want to write a Punisher comic, are you any you think would be good for that, or any you see who you see and think oh, they would be great for this other story I have in my head…

Well, I’m super flexible, you know, this isn’t my world, so I understand that there are young artists they’re gonna wanna try to help elevate, and if I can do that, that’s great. My original list of who I want to work with in the future, like co-writers and stuff, I just went all out. Like oh, co-writers? Alan Moore, Geoff Johns … and then they laughed at me and said, ‘OK no really, come on.’ So I was like for artists, John Romita, Jr., haha. But you know, I tried to bite off more than I could chew. It’s easier for them to tell me to scale it back than to try to get more out of me. So I always go for the big names, I’ll work with them all eventually. 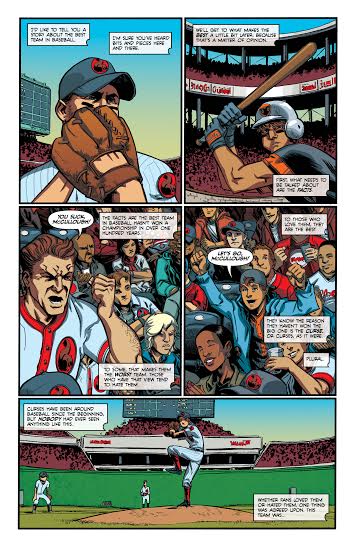 You say you’re stepping into a world that’s not your own. I know that Marvel gave you a lot of scripts to read over, and gave you the prep on writing in the Marvel Method. What was it like going into DC, but still being fresh in the comic-writing world and adapting to that?

Well, I really got to kind of tackle both ways, and I’m sure there’s a million different ways to write, but predominantly there’s the Marvel Method, and that’s just kind of the typical comic-book script. So I knew I was writing for both companies, so when I was taking a stab at the Marvel Story I did the Marvel Method, and then when I went to work for DC I just stuck to the typical script-style. And you know, both have their merits, and neither is hard, so as long as you know what you’re doing — and I had the story in my head. It was just a matter of getting it out.

Now, I’m sure you’ve been asked this a million times already, but how do you find balancing your MMA training with writing?

It’s totally fine, you know. There will be days or weeks where I’m training my ass off, and I’m feeling great, and I go to the gym twice a day, and normally I take weekends off, just because. Like, I’ll hang out in the gym and train my ass off until my body fails, and then I’ll train some more, so my coaches are the ones that gotta tell me, ‘Alright, take it easy, you’ve done enough this week.’ So that frees up time on the weekends, or here and there if I’m a little bit banged up today but it’s really not going to accomplish much if I get even more banged up, so I take the day and I write.

Like in wrestling, UFC fighters come out to music playing, and sometimes have these grand entrances. Have you given any thought to that aspect of it?

Haha no, none whatsoever. I’m just gonna walk out there and then choke somebody out. 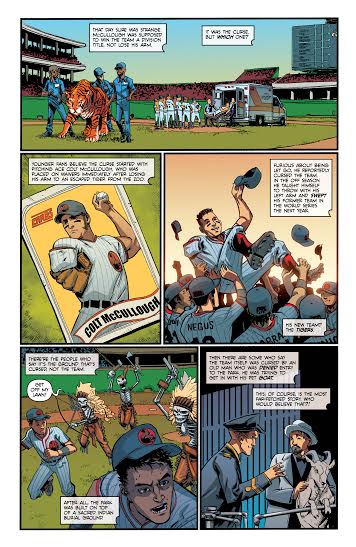 You say you have other stories in your head. Besides the Punisher, what kind of projects would you like to work on in the future?

Well, obviously I’m looking forward to writing Drax, because it’s a character I’m not super familiar with. And when I say I’m not super familiar with, I mean I don’t have the love beyond when I first started reading comic books. So that will give me the freedom to just kind of, you know, use my imagination and do whatever I want. I can get as wacky with Drax in that cosmic, outer-space kinda way, whenever I get the chance to write Punisher, I’m gonna try to make it as close to reality as possible. That’s the great thing about comic books — you can kind of use your imagination and do whatever you want.

Since you are an avid fan of comic books, besides yourself, what else do you think people should be reading right now?

The thing about me is I used to travel so frequently that I would only read comic books in trade paperback form, so that would leave me about four to six months behind on everything. That being said, my “to read” pile is like six feet tall, but the things I always jump the line for and read first are anything by Jason Aaron, so his Thor stuff, obviously, Southern Bastards, uh, what else am I reading? … Snyder’s Batman, that always jumps the line and I read that as soon as it comes out, Walking Dead, and I always mention Ed Brubaker. Read anything he does, ‘cuz he’s probably still my favourite writer.