It is not difficult for any decent human being to immediately apprehend why and how Donald Trump’s ban on immigrants from seven Muslim countries is inhumane, bigoted, and shameful. During the campaign, the evil of the policy was recognized even by Mike Pence (“offensive and unconstitutional”) and Paul Ryan (violative of America’s “fundamental values”), who are far too craven and cowardly to object now.

Trump’s own Defense Secretary, Gen. James Mattis, said when Trump first advocated his Muslim ban back in August that “we have lost faith in reason,” adding: “This kind of thing is causing us great damage right now, and it’s sending shock waves through this international system.”

The sole ostensible rationale for this ban – it is necessary to keep out Muslim extremists – collapses upon the most minimal scrutiny. The countries which have produced and supported the greatest number of anti-U.S. terrorists – Saudi Arabia, Egypt, Qatar, UAE – are excluded from the ban list because the tyrannical regimes that run those countries are close U.S. allies. Conversely, the countries that are included – Syria, Iraq, Libya, Somalia, Iran, Sudan and Yemen – have produced virtually no such terrorists; as the Cato Institute documented on Friday night: “Foreigners from those seven nations have killed zero Americans in terrorist attacks on U.S. soil between 1975 and the end of 2015.” Indeed, as of a 2015 study by the New America research center, deaths caused by terrorism from right-wing nationalists since 9/11 have significantly exceeded those from Muslim extremists.

Trump’s pledge last night to a Christian broadcasting network to prioritize Christian refugees over all others is just profane: the very idea of determining who merits refuge on the basis of religious belief is bigotry in its purest sense. Beyond the morality, it is almost also certainly unconstitutional in a country predicated on the “free exercise of religion.” In the New York Times this morning, Cato analyst David Bier also convincingly argues that the policy is illegal on statutory grounds as well.

Making this worse still is the central role the U.S. Government played in the horrors from which many of these now-banned people are fleeing. The suggestion that Trump protected the countries with which he does business is preposterous. The reality is that his highly selective list reflects long-standing U.S. policy: indeed, Obama restricted visa rights for these same seven countries, and the regimes in Riyadh and Cairo have received special U.S. protection for decades, long before Trump.

Beyond U.S. support for the world’s worst regimes, what primarily shapes Trump’s list is U.S. aggression: six of the seven predominantly Muslim countries on Trump’s list were ones bombed by Obama, while the seventh (Sudan) was punished with heavy sanctions. Thus, Trump is banning immigrants from the very countries that the U.S. Government – under both Republicans and Democrats – has played a key role in destabilizing and destroying, as Democratic Sen. Patrick Murphy, with surprising candor, noted this week:

We bomb your country, creating a humanitarian nightmare, then lock you inside. That’s a horror movie, not a foreign policy.

It is critical to recognize and fight against the unique elements of Trump’s extremism, but also to acknowledge that a substantial portion of it has roots in political and cultural developments that long precede him. Immigration horror stories – including families being torn apart – are nothing new. As ABC News noted last August, “the Obama administration has deported more people than any other president’s administration in history. In fact, they have deported more than the sum of all the presidents of the 20th century.”

And the reason Trump is able so easily to tap into a groundswell of anti-Muslim fears and bigotry is because they have been cultivated for 16 years as the central fuel driving the War on Terror. There are factions on both the center-left and right that are primarily devoted to demonizing Muslims and Islam. A government can get away with bombing, invading and droning the same group of people for more than 15 years only by constantly demonizing and dehumanizing that group and maintaining high fear levels, which is exactly what the U.S. has done under two successive administrations. Both the Bush and Obama administrations ushered in all-new and quite extreme civil liberties erosions aimed primarily if not exclusively at Muslims.

Trump did not appear out nowhere. He is the logical and most grotesque expression of a variety of trends we have allowed to fester: endless war, a virtually omnipotent presidency, unlimited war powers from spying to due-process-free imprisonment to torture to assassinations, repeated civil liberties erosions in the name of illusory guarantees of security, and the sustained demonization of Muslims as scary, primitive, uniquely violent Others.

A country that engages in endless war against multiple countries not only kills a lot of people but degrades its own citizenry. Trump is the rotted fruit that inevitably sprouts from such fetid roots.

Trump is not a Russian phenomenon, nor an Italian one, nor Latin American: he is distinctly and consummately American, merely the most extreme face yet from America’s endless War on Terror and its post-2008 lurch toward oligarchy. Pretending that Trump is some grand aberration, some radical departure from U.S. history and values, is simply a deceitful way of whitewashing what we have collectively endorsed and allowed.

Thus did we witness the spectacle last week of many acting as though Trump’s plans for CIA black sites, torture and rendition were shocking Trumpian aberrations even though many of those denouncing it were the ones who advocated or implemented those policies in the first place or protected those who did from criminal prosecution. Denouncing and opposing Trump should not serve to obscure sins of the recent past or whitewash the seeds planted before him that have allowed him to sprout. Opposing Trump’s assault on basic liberties requires a clear understanding of the framework that gave rise to it.

But this Muslim ban and that, in effect and by design, is what it is – is nonetheless different in significant degree if not in kind. Despite what has come before it, there is no denying that Trump is now taking the U.S. to dark and foreboding places that are a step beyond what even recent Presidents, in the name of protection against Muslims, have ushered in. A formal and absolute codification of this anti-Muslim premise is inherently dangerous, as it is likely to further indoctrinate millions of Americans to regard Muslims as uniquely menacing and threatening.

Beyond that, the humanitarian horrors instantly produced by Trump’s immigration ban are impossible to overstate. That countless war refugees fleeing the ravages the U.S. helped create are now banned from refuge, many consigned to their deaths, is self-evident. The parallels with how Jewish refugees fleeing Nazi persecution were treated in the 1930s and 1940s are obvious. This new Twitter account has been describing individual Jews whose ship was refused entry by the Roosevelt administration in 1939 as they were fleeing Nazis, only to end up dying in Auschwitz and other camps.

As my colleague Lee Fang documented in 2015, the prevailing rhetoric about Muslim refugees is identical to that used to demonize Jews during the World War II era. Indeed, the right-wing rag Daily Mail’s 2015 cartoon showing Muslim refugees as rats (top cartoon, below) perfectly tracked a 1939 cartoon in a Viennese newspaper depicting Jews the same way (bottom, below): 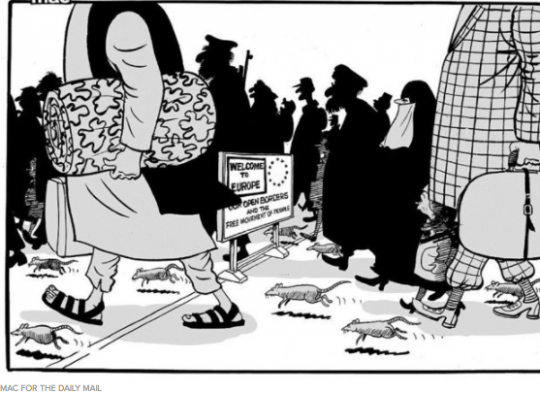 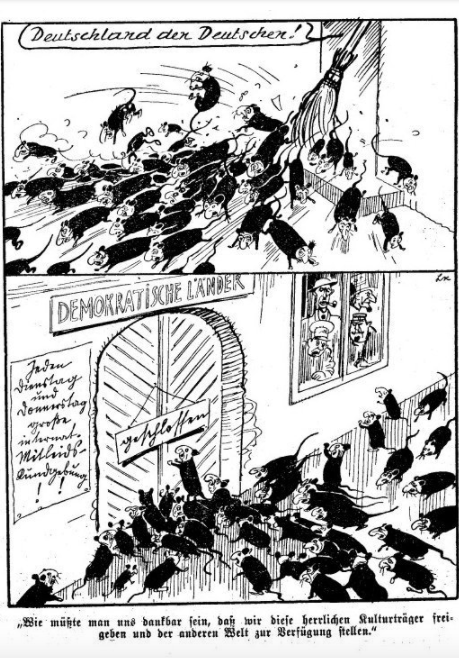 But as I’ve noted before, it is often the more pedestrian, less dramatic injustices that resonate when it comes to civil liberties abuses. This McClatchy article from yesterday, for instance, tells the story of Murtadha Al-Tameemi, a 24-year-old Iraqi born software developer at Facebook who had to urgently leave Canada where he was visiting his family this week in order to rush back into the U.S. before Trump’s ban took effect, and he is now barred from visiting them due to (rational) fear that he will not be able to return. In that article, Al-Tameemi describes the hideous abuses and indignities he has long faced as a Muslim immigrant in the U.S., but he now faces a full and absolute ban from entering.

Meanwhile, the New York Daily News reports this morning that many Muslims and Arabs who have long carried visas to the U.S. are being stranded in airports and barred from entry to their planes. Even more significant, albeit harder to quantify, is the extreme fear that Muslim Americans and immigrants quite rationally harbor about what this will all spawn, both in terms of cultural norms and additional policies. Just as attitudes toward LGBT Americans changed as their personal stories became more known, these kinds of stories of how ordinary Muslims are having their basic rights trampled on with no justification are critical for highlighting how abusive these polices are.

One of the greatest dangers of these trends is the ongoing ability of groups devoted to protecting Muslim Americans’ civil rights to function freely and effectively. The largest such group, Council on American-Islamic Relations (CAIR), has long been the target of the U.S. Government. The Bush administration branded the group an un-indicted “co-conspirator” in a terrorism case, ensuring it would be smeared but remain without the ability to defend itself in a court. As we reported in 2014, the group’s Executive Director was targeted with invasive, highly personalized electronic surveillance by the NSA.

CAIR now plays a critical role in defending American Muslims and immigrants from these civil liberties assaults. The group already announced that they will file suit challenging the constitutionality and legality of Trump’s ban. Muslims who have nowhere else to turn are often defended by CAIR as their basic rights are assaulted, and that will be even more true now.

But the group has long been in the cross-hairs of the worst anti-Muslim extremists, such as Peter King, along with even worse radicals who now exert significant influence in the Trump administration. Breitbart, whose former chief Steve Bannon is now one of the most powerful individuals in the White House, has long had an intense fixation with the group.

There is a serious risk that CAIR will be targeted, as they have been in the past by less extreme officials. They are a critical bulwark protecting Muslim Americans and Muslim immigrants from serious civil liberties abuses, and need and deserve support from anyone able to provide it, which one can do here (as disclosure: I have spoken several times at CAIR events and to various affiliates and intend, in solidarity, to do so even more this year).

It is often the case that extremists on both sides of a protracted conflict end up mirroring one another’s attributes, mentality and tactics. That is precisely what we are now witnessing as anti-Muslim crusaders in the U.S. adopt the same premises as ISIS and its allies: that the west and Muslims are inherently and irreconcilably adverse. As my colleague Murtaza Hussain described in 2015, the ultimate strategic and propaganda goal of ISIS is to eliminate the “gray zone” for western Muslims, “generating hostility between domestic Muslim populations and the broader societies that they live in” so as to convince both sides that they should be at war rather than striving for harmony and assimilation.

It is difficult to envision anything that helps ISIS’s overarching objective, its central narrative, more than Trump’s immigration ban aimed at Muslims while privileging Christian refugees. But it’s not impossible to imagine polices that could be worse in this regard. The danger now is that this immigration ban is merely the first step on this heinous path, not the last. That’s why it’s urgent that everything be done to denounce it, battle it, and defeat it now.

The post Trump’s Muslim Ban is Culmination of War on Terror Mentality but Still Uniquely Shameful appeared first on The Intercept.