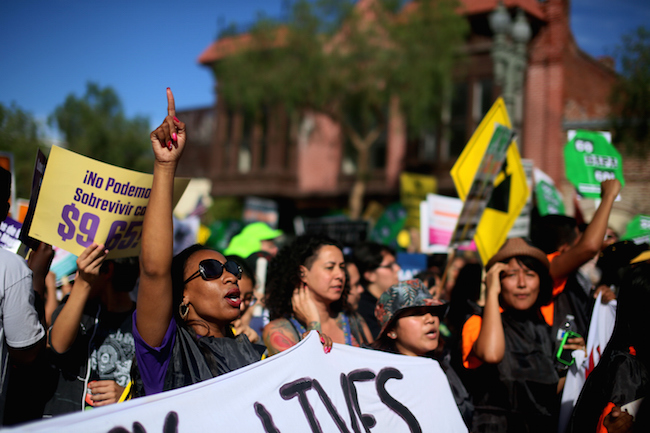 Back in September, New York state approved a $15 per hour minimum wage for fast food workers. Now, California is following suit, but happily for all hourly workers, instead of just those in the fast food industry.

According to the LA Times, California governor Jerry Brown and the state’s labor unions made a deal to increase the statewide minimum wage from $10 an hour to $15 hour by 2022. The gradual increase would start on January 1, 2017, when the minimum wage would be $10.50. Businesses with less than 25 workers don’t have to raise their minimum wage to $15 an hour until 2023, a year later than everyone else.

Despite the progress made, this deal is still tentative, and has required years of political maneuvering. According to the deal, California’s governor could block increases on a temporary basis if the economy was bad. As the AP reports, there are two other ballot measures that call for a minimum wage increase to $15 by 2021 and 2020 respectively, though these might be withdrawn, if the negotiated deal gets signed into law.

The LA Times also mentions that if either Bernie Sanders or Hillary Clinton win the presidential election in 2016, a nationwide campaign for a higher minimum wage could get a boost. Recently, various cities have raised their minimum wages to $15 an hour, including Los Angeles and Seattle, as USA Today reports. California is the first state to follow suit on such a scale.

(via LA Times, the AP and USA Today)