by: Gregg Rosenzweig
Brought To You By
Concussion Movie
December 11, 2015

Some millennials go to college to figure what to do with their life. They graduate, live at home till 30, and when they’re ready… get right to it. For others, college itself becomes the lightning rod for an idea that ends up feeding hungry people on 26 college campuses across America.

Meet Rachel Sumekh, co-founder of Swipe Out Hunger, who took the latter approach in growing her college pet project into an organization that has donated over 1.2 million pounds of food to the hungry since 2010. A good thing since 49 million people in the U.S. don’t know where their next meal is coming from. Forty-nine MILLION. Take that number in.

But how did it happen? How did an 18-year-old UCLA student (coming off her stint as high school student body president) help create a movement that would eventually extend to college campuses across the U.S.? Here’s how.

During her time at UCLA, Sumekh noticed that students often left hundreds of dollars on their meal plans. And perhaps more startling, “There’s not a single university that gives those dollars back.” A notion that Sumekh and her Swipe Out cohorts saw as unfair. “You’re already making so much money off of selling this exorbitantly priced meal plan, and now you’re making a double profit by keeping these dollars.” 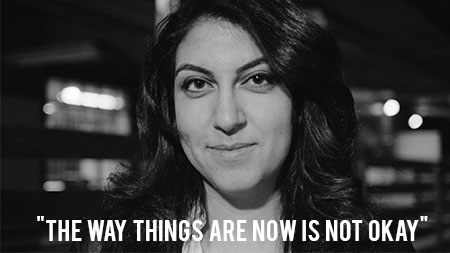 Sumekh, of Iranian-Jewish descent, saw this as an opportunity. Combining her natural inclination to be critical of the status quo with her passion for feeding the homeless led Sumekh to start a grass roots effort. This effort included approaching students to “swipe” their meal cards for food they would not otherwise need – to help people in need – so these meal points would not go to waste. That was the birth of Swipe Out Hunger (called Swipes For The Homeless at the time) – a simple idea that would start as a food bank on the UCLA campus for the homeless as well as students and faculty in need.

At first, when the university found out Sumekh and Bryan Pezeshki (another co-founder) were convincing students to donate unused meal points, they told her “This does not work. You need to stop.” But once the groundswell of student support started, the university started to change their tune. According to Sumekh, “The UCLA director, who at one point was asking us to stop… now started taking phone calls with new universities to convince them to adopt the program.”

Are You A Game Changer? Or Do You Know Someone Who Is? Click Here.

Five years after starting her little pet project, Swipe Out Hunger is helping the “food insecure” at college campuses all throughout the country – and her game-changing idea has even been recognized by President Obama as a White House Champion of Change.

“Our vision is to have every college student feel like they can make a difference in their community, so that they can start looking at the systems that they’re a part of and how they can make a small innovation and have a huge impact in someone else’s life,” says Sumekh.

Taking an idea from inspiration to reality, while putting a dent in America’s hunger crisis?

When opposing forces collide and stakes couldn’t be greater, it takes an exceptional individual to see beyond the challenge, sacrifice everything and change the world.  The #Gamechangers Campaign celebrates everyday people who tackle great challenges and triumph in the face of adversity.  We seek to honor the underdogs who don’t just beat the odds, they change the game.

Are you a Game Changer?  Do you know a Game Changer? Submit a picture or short video with an explanation up to 500 words about how you (or your nominee) are currently changing the game. Upload proof of your game changer to the Uproxx submission page or via social media using the tag #GameChangerContest @Concussion Movie. You could win funding for your cause.