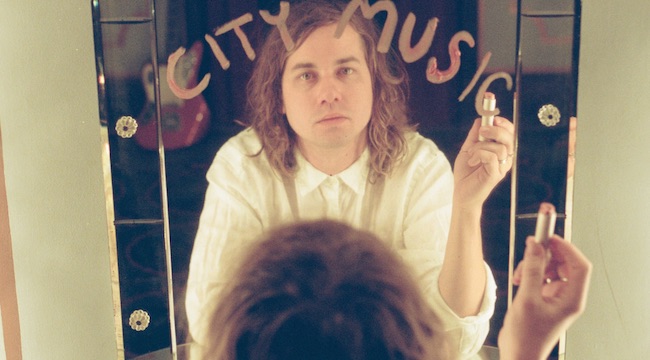 When Kevin Morby was 17, he dropped out of high school and left his hometown of Kansas City for Brooklyn, a place that had seduced him from afar via the magic of film and music. On his forthcoming LP, the mesmerizing City Music, Morby retains this romance for America’s most romanticized metropolis, as well as various other urban spaces to which he was traveled in the past decade as one of the most prolific musicians in indie rock.

“I was just in Paris, which is really important to me,” Morby told me last month. I caught him by phone during a rare moment at home back in Kansas City.

“I was just there on a press trip and it was probably the 21st time I’ve been in Paris,” he said. “At this point, I’m getting to where I’ve spent over a month in most every major city, but I’ve only ever been there one day at a time.”

As a child, Morby’s family moved around a lot, which can be traumatic for children, but for Morby this transient life proved to be transformative. A busy music career has kept him constantly on the move — in the late ’00s he joined the fine indie-folk group Woods and appeared on some of the band’s best efforts, including 2009’s At Echo Lake and 2012’s Bend Beyond. Around the same time, he joined up with Cassie Ramone of the Vivian Girls in the bubblegum-punk band The Babies.

But it’s as a solo artist where Morby has really thrived. Starting with 2013’s Harlem River, Morby has continued to refine his skills as a songwriter and record-maker, hitting a new peak with City Music, which Morby has fashioned as an eclectic, mixtape-style grab-bag that draws on ’70s punk, ’60s psychedelic folk, and mid-20th century electric blues.

Your records always have distinctive moods. Singing Saw, for instance, had this intense vibe that was reminiscent of, say, religious cult music from the ’70s. City Music has more of a Lou Reed feel on some tracks, while one of my favorite songs, “Dry Your Eyes,” almost sounds like an old electric blues record from the early ’50s. Do you think in terms of atmosphere when you’re making an album?

Yeah, for sure. There’s this record by a guy named F.J. McMahon, he’s a Vietnam vet who came back from [the war] and made one record, this kind of cult record, that was a very big inspiration for Singing Saw. So, maybe that’s why you get that vibe. Something like “Dry Your Eyes,” I was like, “I want to make a song [where] the vocals sound really dry and really up front, kind of like they do on Lou Reed’s Coney Island Baby.

I think art just sort of recycles itself and you pull from influences. The thing about it is, whenever you pull from an influence, you make it your own, because it’s you doing it.

You moved around a lot as a kid. Now it’s your job to travel all the time. That sense of perpetual motion is a big part of this record. How did you make your peace with that lifestyle?

It was difficult as a kid just because you’re switching schools and stuff, but I actually was kind of fortunate in the fact that I was young enough where it didn’t make too much of a difference to me. It was really hard on my sister, I remember, but she was more high school age. I can’t help but think there’s some sort of connection to having moved around a lot and then having a hard time staying put as an adult. The change of scenery always feels really good to me, and it’s more anxiety-producing if I’m staying in one place.

A lot of musicians have told me that moving around spurs their creativity. Do you write a lot on the road?

Yeah, absolutely. There’s also this process that takes place where it’s just everything that you take in on the road. You don’t process it right away, but then when I get back home, it all kind of comes out. It’s like filling this creative song bank with a bunch of material, and when I finally get a chance to sit down, it all comes out in its own way.

You’ve always been a pretty prolific artist. Are you working on songs every day?

I’ve always got three or four on hand that I want to develop. My record label gets annoyed because I’m like, “I’ve got two more albums.” I get really ahead of myself, and I have to have people corral my insanity. I’m very ADD, very quick thinker, and I feel like my creative brain is always on.

When you’re working on songs, are you already thinking in terms of albums?

Is songwriting a compulsive act for you?

Yeah, I guess so. I mean, I just see it sort of as a blessing. The melodies find me and I just have this nervous energy to just constantly want to pick up an instrument and so I have no complaints about it. I’m not arguing.

You’re usually compared to classic-rock songwriters like Bob Dylan and Lou Reed. But you recently covered Everclear’s “Santa Monica” with Waxahatchee. How much does ’90s alt-rock factor in as an influence?

We were joking around with it in the green room, you know? But then we’re like ‘This is a really good song.’ When we started to play it, everyone screamed. But I have this sense that when everyone started to applaud, they weren’t immediately conscious of the fact that it was Everclear. They were like, ‘What is it again?’ [But] it’s a good song. I think songwriting still existed in those times. People were still writing songs.

If you grew up in the 2000s, the music that you’re listening to is not really based around the song anymore. It’s more based on the production or the party value or whatever. But in the ’90s, I think there was actually a lot of good songwriters and they were coming from places where their influences were the same as my influences, Bob Dylan or Neil Young or whatever. When I listened to Third Eyed Blind as a kid, I was like, “This is incredible, I want to do this.” They have really strong verses and choruses and the melodies are amazing and the lyrics are cool. It at least set me off on a good foot.

City Music is out tomorrow, 6/16 via Dead Oceans. Get it here.