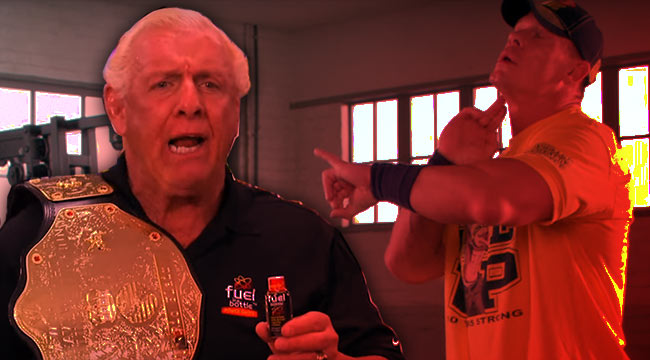 In just a week, WWE Superstar The Miz went from this hilariously absurd KFC commercial to cutting the promo of his life on the Smackdown Live post-show Talking Smack. While we love that all of those acting chops are getting to shine through for the Intercontinental Champion, we love pro wrestling’s rich history of food endorsements even more.

From NWA pop cans to the preferred pizza of some of WCW’s most intimidating performers, join us as we take a fond look back at all of the food wrestlers have tried to convince us to buy.

Macho Man’s relationship with Slim Jim is probably the most well-known endorsement for any type of brand when it comes to pro wrestling. Though there’s a library’s worth of commercials to choose from, let’s go with the one where he teaches these kids the value of property destruction as a means of revenge against asshole baby boomers. Remember that the next time you see someone complaining about Millennials and how they hate soap and cereal or whatever.

The Ultimate Warrior for Slim Jim

We’re all familiar with Macho Man Randy Savage’s favorite tube of dried out meat (no, not Hulk Hogan), but sometimes we forget this classic spot from the Ultimate Warrior. What’s best about this is that it comes off as him promoting the joys of mass cocaine consumption more than a snack on the go. Is there anything more apt than a bunch of white powder exploding in Warrior’s face as he freaks the f*ck out? Nope.

Speaking of Hulk Hogan, who is going to be my new favorite person and get me an audio clip of him shouting I DON’T EAT NUTS!! to make into my permanent text tone?

Andre the Giant for Honeycomb Cereal

“Andre the Giant and a robot team up to sell cereal to small children” is a magical sentence that makes me thankful every day that I can say it out loud and have it be real.

As you can see, wrestling went real hard on cereal promotion. After The Rock referred to Cena and his colourful wardrobe as “a big fat bowl of Fruity Pebbles,” the chance to forever associate the two proved impossible to pass up. And as we all know, nobody can stand up to the promotional juggernaut that is John Cena:

How does John Cena end up selling so many products when you can’t see him? Because when you CAN see him, he’s willing to make himself look as silly as possible. “What if John Cena big booty danced to sell pouches of juice?” is a pitch email I would have loved to read.

Huh, I’ll also show up anywhere at the promise of a double meat sandwich. *aggressively winks at audience*

John Cena was vital to the promotion of Y2 Stinger and letting us know it don’t got that metal taste, but he wasn’t the only WWE Superstar to get in on that endorsement deal. Remember, nobody will ever be as cool and tough as Triple H, and if you disagree, he will make sure you’re swarmed by actual bees. That black and yellow NXT color scheme? Subliminal warning probably.

What’s scarier, a godless Canadian nightmare cannibal egg named Humpty, or a rampaging Brock Lesnar? Gonna call it a tie and hope neither of them ever find out about my decision and try to prove me wrong.

Ric Flair for Fuel in a Bottle

Good idea: staying alert when driving and working
Bad idea: showing up at a gas station and shouting YOU’RE ABOUT TO GET ROBBED!

I’m sure we can all agree that Fuel in a Bottle is much better than “Hemorrhage in My Hands” by the band Fuel, though we’re also sure both will leave something bleeding.

Edge and Christian for Stacker 2

Maybe not technically a food, but this commercial is both too good and too confusing to leave out. Do we take the supplements to look like Edge and Christian? And if so why would we want to take them when clearly nobody wants to f*ck them? Are you supposed to f*ck the bottle? How many people tried and ended up in the hospital? What kind of list will I get on for googling “Stacker 2 dick-related lawsuit”? And does that mean Kane and this guy gon’ f*ck?

We all know the Snickers commercial that makes Roman Reigns’ brown eyes blue, but WWE and Snickers go way back. Everybody cries about WWE raiding Japan and the indies, but where’s the outcry for not signing Fat Panda, huh??

Kane, The Dudley Boyz, and more for Chef Boyardee

Bless the YouTube user who decided to put all of these weird and wonderful canned pasta commercials into one weird and wonderful supercut. I didn’t eat this stuff as a kid and I’m not sure how appetizing it is to watch saucy, mushy pasta explode all over wrestling dudes, but…oh no, am I gonna end up on another list now?

Meng and Goldberg for Little Caesar’s

While it’s no Undertaker for Domino’s commercial — one of the greatest commercial masterpieces of our time — there’s something wonderful about two of the most physically intimidating wrestlers in WCW sitting down to eat a shitty pizza. 10/10 would watch Meng eat pizza forever.

Though it came after Demolition’s prime, I really wish the Monday Night Wars had been more about pizza and less of a rich dude dick measuring contest. AUSTIN 3:16 SAYS I JUST ORDERED STUFFED CRUST! just rolls off the tongue, tbh.

“Welp, at least Demolition didn’t beat the living shit out of our kids!”

How amazing are those NWA cans of Mello Yello? Also, how sad did I just make myself thinking about Dusty Rhodes?

The answer to the above question is the most sad, so let’s end on a happy note with this collection of WWF Superstars awkwardly biting into ice creams bars emblazoned with the likeness of their coworkers. Love him or hate him, at least CM Punk’s influence includes bringing this to YouTube.