Avocado Salsa Without The Avocados? We Put A Viral Recipe To The Test

Like all good Californians, I will gladly shoehorn avocados into any almost any dish (as long as the avocados aren’t cooked, that’s gross). Obviously, the king of all avocado dishes is guacamole, but just behind that is what’s often called guacamole salsa, or avocado salsa — a thinner but still creamy version that’s more for drizzling on tacos than scooping up with chips (though you can still do the latter, sorta). This version is a staple of taco shops and also my favorite chain, El Pollo Loco.

I’ve tried to recreate this at home and been reasonably successful, with most versions using tomatillo and water to create the thinner texture. So I was taken aback when a friend sent me this YouTube video. It comes from the account “Cooking With Paty,” and in the video Paty promises to make avocado salsa without the avocados. The video positions this not as a parlor trick, but as a common money-saving tactic for taquerias. I have no idea whether this is true, though the video describes itself as “The Secret of the Taco People,” which I find wildly charming.

Naturally, I’d never heard of such a thing. I wanted to test this out, to see whether green squash and a little tomatillo and jalapeño could indeed create a viable avocado salsa and act as a low-cost avocado alternative. To make it a challenge, I made both the real version and Paty’s impostor to see if I could fool my family.

PART I — THE FAKE

The green squash at my store looked a little bigger than Paty’s so I had to eyeball it a little bit. She used three big tomatillos, I used five small ones, but otherwise, it’s as similar as I could make it.

As per Paty, sliced squash and whole tomatillos go into boiling water. Paty said five minutes. I don’t know if she has a different stove than I do, but on my stove, it took more like 10 to get the squash soft enough. I suppose that could be a function of how ripe the squash were. Do squash get “ripe?” Squash are weird, I don’t understand them.

Meanwhile, I toast my garlic and jalapeños in a pan with a healthy amount of vegetable oil. Incidentally, charred veg is the root of virtually all salsas.

This part you actually can get done in five minutes or so, assuming your pan is hot enough (hot enough to see those air bubbles in the oil).

As instructed, the boiled squash and tomatillos go in the blender with the toasted jalapeños and garlic, using the excess oil to get the proper texture. Salt and cilantro go in last. This version uses less water than a normal avocado salsa, since the squash is mostly water already.

To my eyes, it looked basically indistinguishable from a “normal” avocado salsa. Which does raise the question, how many times have I actually had squash salsa thinking it was avocado? Someone needs to start marketing home avocado test strips right away.

For this version, all the steps and ingredients are virtually identical, except I re-replaced the squash with one Hass avocado and about 1/4 cup cold water.

Here they are side by side. Can you spot the difference? Fine, yes, the avocado version is the one on the right. I probably tipped my hand here by not adding a little more water to the avocado side. I would have, but it’s a little harder to judge in a blender because the avocado gets a little frothy at first and then settles. Honestly though, water was really the only difference between the textures. With a little more in the avo version they’d be identical.

Here are the comments from my tasters. Avocado was salsa 1, impostor version was number 2: 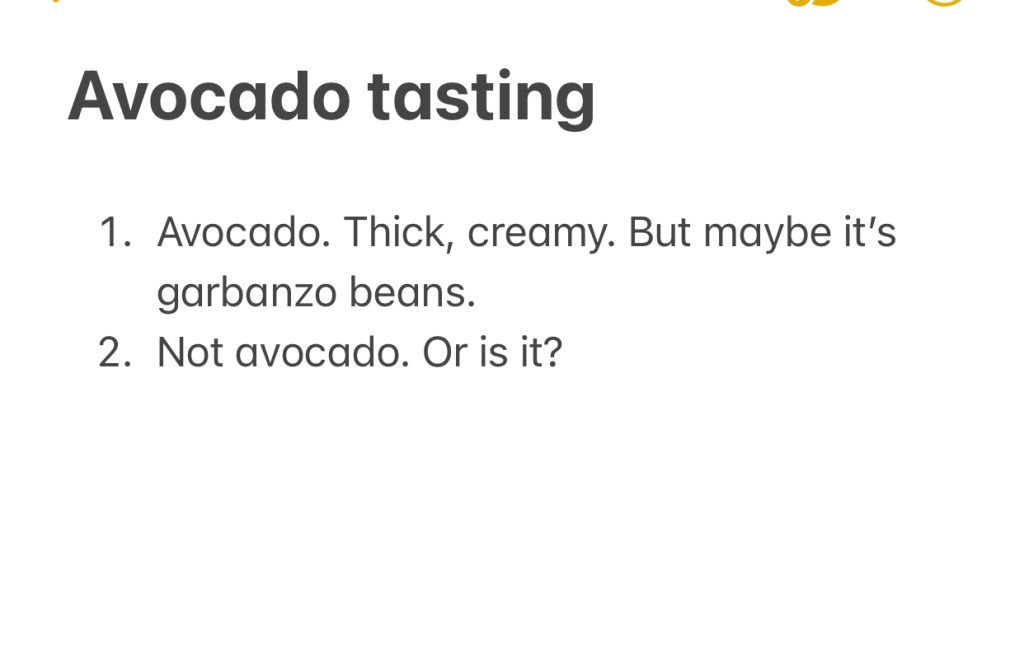 So yes, in the end none of my tasters were fooled. Though if they didn’t have the genuine article sitting right next to the impostor version as a point of comparison, and if perhaps they didn’t know that they were trying to identify an ersatz avocado salsa, I have little doubt that they would’ve taken the squash version as the genuine article. Even knowing that one salsa was avocado-free, none of them seemed especially confident in their answers.

Of course, it should be noted, I bought the avocados for 99 cents each at my local supermarket. The green squash was actually more expensive, which would make one question the impostor version’s entire reason for existing. Avocados spoil much faster, which might make the squash version cheaper in the long run. But that’s only really a consideration if you’re running a taco truck, rather than just making salsa in the kitchen. Look, I’m not a salsa enthusiast, not an economist.

Attempts to fool anyone aside, here’s the kicker: when it came time to eat the tacos we’d made, the squash version was good enough that everyone put genuine avocado salsa on one taco and fauxvecado on the other. Which is to say: even knowing it was “fake,” it was still a decent salsa.

So yeah, you can make fake avocado salsa with squash, and it would probably be avocado-like enough that people wouldn’t question it. The even wilder takeaway here is that you can indeed make a tasty salsa out of squash. Who knew? (Paty did, that’s who).