Why Robots Aren’t Ready To Take Over Fast Food 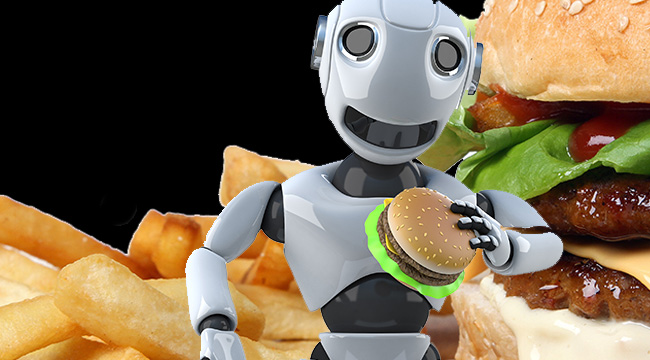 One of the most durable myths in the modern American food industry is that you can replace people with robots. It’s an especially popular belief with CEOs like Andy Puzder of Hardee’s, who argues that rising wages will make phasing out actual human employees all but inevitable — first in the front of the house, then the back. But it’s worth digging deeper to see if AI-restaurants are really the future.

The most obvious indicator that this concept could work would be Starbucks, with its highly popular app that lets you order while walking and just pick up your drinks. But there’s a fundamental misunderstanding here; taking your order is not the primary job of anybody manning the register at a fast food place. They are actually there to serve and prepare food, especially quick items like black coffee and pre-made orders of fries, leaving the bigger jobs to the cooks and baristas. All these screens do is take an annoying task off an employee’s plate and cut down on miscommunication from the customer; the Starbucks app hasn’t “replaced” anybody.

So what about the back of the house? Could we see, say, a Terminator brewing coffee? Not at the moment. A robot simply isn’t capable of doing these jobs. A top of the line robot like Boston Dynamics’ Atlas, right now, costs a lot of money to build, and DARPA, the government’s mad science division, has invested millions in advanced robotics technology. Behold, the terrifying state of the art!

While this is highly entertaining, it illustrates that tasks that are simple for humans are still difficult for robots. It may be decades before even the military gets a workable robot chef, and yes, they’re working on that. NOTE: It still can’t recognize what a spatula is 20% of the time. Which leads us to another point, namely that doing this would cost a fortune.

OK, so, let’s say you build a stationary “burger bot.” Food goes in, burgers come out by some mechanized process. You still have a problem. Robots are delicate, complicated machines. Constructing them and programming them requires specialized knowledge graduate students spend years developing, and thus they are not cheap. A Predator drone fleet, which is basically just a collection of really advanced model airplanes, costs $62 million a year.

There are nearly five million people working the retail end of fast food at the moment, and for this to be worth it, the robots replacing them would have to cost less than $19,000 a year, right now. Keep in mind, these robots are going to work hard. Your average McDonalds will serve 200 hamburgers a day, and that’s not even getting into fries, nuggets, and McFlurries.

You’d also need to either rip out or heavily modify the thousands of dollars of kitchen equipment in each restaurant and get rid of it: McDonald’s alone would need to do that with 33,000 franchises. You’d need to redesign and rebuild your food storage and food delivery system to accommodate the robots. And don’t forget cleaning: Any sort of burgerbot would also need to be cleaned and sterilized constantly to reduce the risk of food-borne illness and damage to the machinery. And of course, all this assumes that the franchisees would agree to this. Since they’d be paying for all of this out of their own pockets, that consent would be rather important.

Oh, did we mention that, most likely, one broken part or one burger jammed in the wrong slot would likely shut down the burgerbot completely so it wouldn’t get rotting beef in its gears? And that it would be offline for hours, even days, until a human came along to fix it?

But all of that pales next to the biggest problem. Anybody insisting that the robots taking our jobs is inevitable needs to stop and think about what they’re actually saying, for a minute. If you’re insisting robots so cheap and so powerful they can take on human jobs are coming soon, you’re essentially arguing we’re on the cusp of an industrial revolution unprecedented in the history of the human race. And that’s true, but the robotics revolution will have effects we can’t anticipate yet.

To really make this work, you would have to take the vast majority of our current fast food workforce and make every single one of them into college graduates, or start importing foreign workers en masse. Somebody would have to pay for these educations, and it’d probably fall to the friendly robot-building company, which will bake the cost into the robot.

And fast food companies wouldn’t be the only ones competing for these workers; if robots are that cheap and that effective, essentially every service job from airline ticket clerk to crossing guard would be replaced with robots, all of which would have the same need for human hands. So, keep dreaming of robots, CEOs, but set aside money in the budget for wage bumps.