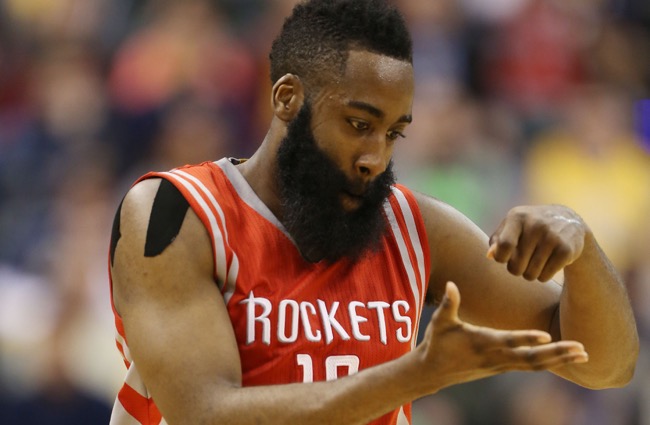 Let me start by saying this: I love Steph Curry in a deep, profound basketball way – my absolute favorite basketball play is a heat-check three pointer in front of a loud home crowd, and that play is essentially the essence of Steph. I would not be upset if he won the MVP this year. And yet…

Maybe it’s my argumentative nature, but I’m uncomfortable with how quickly the consensus has built in favor of Curry over James Harden, especially after a season of hearing that the race would come down to the wire and be too close to call. Perhaps for many, the Warriors’ final numbers wound up being so eye-popping that Curry’s case was impossible to deny: 67 wins, the most since 2007, and a net rating of 11.4, more than 4 full points ahead of the second-place Clippers.

As far as I can see, though, nothing happened in the last two weeks of the season that settled the Curry/Harden debate decisively. If anything, the Rockets’ surge to the crucial second seed, even as Patrick Beverley and Donatas Motiejunas were lost to major injuries (and Dwight Howard skipped half of every back-to-back), was the biggest storyline between the two favorites. Both James Harden and Stephen Curry remained their dominant selves down to the wire.

First, the obligatory questions about what the MVP means have to be addressed, if quickly. The best-player-on-the-best-team is reductive, and still does a disservice to Stephen Curry (that’s Kevin Pelton’s ESPN Insider column about Steph). No one has a handle on which player is more indespensible than another, but I personally believe that Harden’s value to the Rockets – his contributions to a team’s performance relative to other elements – is more tangible than Steph’s to the Warriors.

So let’s start with those injuries. As we go through the numbers, remember that the Rockets didn’t just make the playoffs, they finished with the best record of any team in the West besides the Warriors, and they did it in a year when most expected them to either hold steady or regress this year – even before any injuries occurred. The Warriors’ starting lineup entering the year (Curry-Thompson-Barnes-Green-Bogut) played a total of 385 games. The Rockets’ starters (Beverley-Harden-Ariza-Jones-Howard) totaled 293, more than a full season’s worth of games less.

The Warriors experienced exactly one major injury to a rotation player this year, and that was David Lee’s hamstring injury prior to the season tipping off. His absence turned into a boon for the Warriors, as it allowed Steve Kerr to slot Draymond Green into the starting lineup, where he became a contender for Defensive Player of the Year. To repeat: the one serious injury the Warriors experienced didn’t hinder their success at all. The best team in any given sport is very frequently the healthiest team among an established group of elites.

Dwight Howard reminded everyone of how good he can be this week, but it was striking precisely because he was so rarely that player even in the 41 regular season games he played. I could go on about Terrence Jones and Patrick Beverley, but I won’t.

Let’s go back to Steve Kerr, who finished second in Coach of the Year voting. He did a masterful job with the Warriors, introducing a more complex offense and smarter rotations. Everyone would agree that he was a demonstrable factor in the Warriors’ improvement this year.

That is not to say that Kerr’s success diminishes Steph’s achievements. However, Rockets Coach Kevin McHale, who did oversee a very good defense, is not part of the motion offense revolution that has been associated with well-coached teams this year. The Rockets run pick-and-rolls and isolations, and that’s about it. They get away with it because they have James Harden. When Harden is off the floor, the Rockets can score in bunches as long as their fast-break bench rabbits, Corey Brewer and Josh Smith (both midseason acquisitions), can create turnovers. In the half court, the Rockets were hopeless without Harden in the regular season.

Both Stephen Curry and James Harden took steps forward in their game (which we’ll get to in a second). Curry’s team improved around him in obvious ways, and Harden’s team deteriorated around him. They still finished 1-2 in the West.

In Dime’s MVP roundtable, Spencer Lund said this of Steph:

Curry’s ability to distract the other team simply with his presence is incredibly rare. I can’t think of anyone except last year’s MVP and Michael Jordan who inspired that type of reaction from opponents (Steph isn’t even close to MJ as a defender though). Everyone on the court has to be aware of him at all times…

Even though Curry leads the league in Respect Rating, Harden is not far behind, and actually had a better Distraction Score as of the release of Tom Haberstroh’s rankings on December 31st. Steph had a much larger edge in Gravity Score, but I’m willing to chalk a portion of that up to Curry’s quicker release. Basically, defenders helped off of Harden less often than they did Curry (which I think reflects on the lack of other options on the floor), but stuck much closer to the Warriors sharpshooter on average.

Stephen Curry is a better shooter than James Harden (I know, HOT TAKE ALERT), but the Warriors’ offense is so deadly overall that he still gets to catch-and-shoot more frequently, and is more open on average than Harden. According to NBA.com‘s player tracking data, 21 percent of Steph’s three-pointers were catch-and-shoots, compared to 14.7 percent of Harden’s. Both of them shot about 5 percent better on those attempts than pullups. In addition, Steph took 15.3 percent of his three pointers while wide open, which NBA.com defines as having no defender within six feet of him. Only 7.1 percent of Harden’s three pointers were wide open.

Steve Kerr designed the Warriors’ offense to get Stephen Curry open shots. When he doesn’t have the ball, he runs all over the floor, over and under and around screens until he gets an opening (and the ball), and then he fires. James Harden will curl around a screen every so often, sure, but the Rockets’ offensive strategy is simply giving him the ball. Full stop.

So when Harden got the ball, he mostly did so while facing a defense focused solely on him. He’d take a deep breath and barrel straight into that defense over and over again, night after night, to a heroic extent. He wasn’t Shaq or Howard, a player so big that defenders bounce off of him. Harden knew he would get hit, and he knew that it would hurt, and he did it anyway because the Rockets needed him to. And save the flopping complaints for somewhere else – everyone flops.

You don’t need me to go into all of the usage statistics that point out how much more of a burden James Harden shoulders than Steph Curry. All of the fourth quarters that Curry sat out because the Warriors were so dominant with him reduce their meaning. Plain and simple, the Rockets needed James Harden more than the Warriors needed Stephen Curry. Of course, Harden wasn’t the “most needed” player in the NBA this season; Russell Westbrook takes that crown. But James Harden took the Rockets higher than Westbrook took the Thunder, and he was better in every statistical measure that doesn’t count towards a triple-double.

At this point, Stephen Curry is a better player than James Harden. But in my inexact triangulation between a player’s quality, his team’s success and his relative contributions to that success, Harden is the MVP.

(P.S. — Refer back once again to the MVP Roundtable for discussion of the other deserving candidates.)