One of my great hopes in life is that George R.R. Martin will release the next book in the series that inspired Game of Thrones, and when fans start reading, they will quickly discover that the whole thing is about a 3-on-3 basketball tournament in Westeros. My reasoning is simple: it would be hilarious. Think of the reaction. People would lose their minds.

Actually, no. I lied. There are two reasons I want this to happen. First, yes, the part where I would laugh and laugh. But second, because I kind of do want to know how good the characters are at basketball. I have put a lot of thought into it. Like, a lot. So much so that I have chosen to fill this void of knowledge by creating this list, ranking over 50 characters from the show based on how good I think they would be, from worst to best.

A few preliminary notes about my methodology:

The Baratheon (“Baratheon”) children bring nothing to the table. Tommen is an easily manipulated spineless rube who would probably hand the ball to the other team if they told him he had to, Joffrey would get tossed before every opening tip and then pout about it, and Myrcella would… get poisoned? Admittedly, I don’t have a great grasp on Myrcella. Guilty by association with the other two.

Sweet people who appear to have no athletic ability whatsoever. Samwell gets the edge because he has this streak of dumb luck, and he would probably make a few shots as he was hopelessly stumbling to the ground.

Very little time to practice ball-handling when you’re running for your life and/or left for dead in a dungeon.

My first thought was that the High Sparrow could be a valuable addition to a team as a leader of men, even if his advanced age would make him a liability on the floor. But then I realized he’d almost definitely try to appoint himself referee and stop the action every few minutes to make people march around naked to atone for committing personal fouls. Games would take forever.

I refuse to believe Theon is good at basketball. Pre-Reek, I bet he called for the ball constantly and then committed a turnover within moments of catching it. Post-Reek, I bet he just stands in the corner and looks down at his shoes.

[sits on bench drinking wine and scoffing at things]

Sansa is taller and much more resilient than she was when the series started (Sansa has been through a lot), but she’s still not much of an athlete.

No right hand. And not like “can’t dribble or finish as well with his right as he can with his left,” either. He quite literally has no right hand. Could be an issue.

I have a great deal of respect for Robert Baratheon for leading a successful rebellion against a lunatic and then spending most of his time as king drinking wine and eating large slabs of meat, but I don’t see where a fat drunken has-been fits into a lineup in the era of small ball.

There are a lot of similarities between Ramsay and Kobe Bryant that are worth discussing and that could conceivably bump Ramsay into the top ten on this list. There’s also a very good possibility that he would bring a knife on the court and disembowel someone as they drove to the basket, which is almost definitely a flagrant foul. 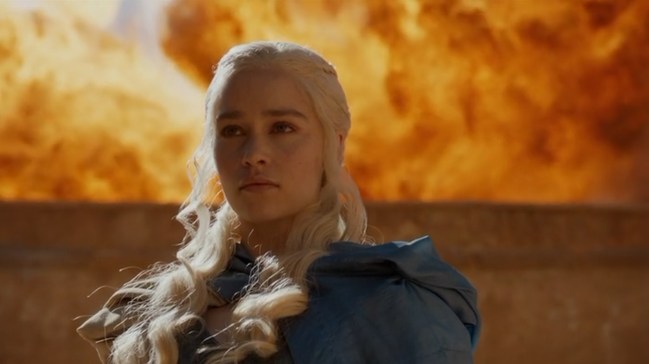 Bran’s inability to use his legs and the fact that somehow no one in Westeros has figured out how to make a wheelchair both represent clear impediments to on-court success, but I feel like the ability to see the future could come in handy during timeouts. Also, he might be able to warg into a mascot. That’s just fun. But the Raven edges him out because he has the same abilities as Bran, but he’s better at them and it wasn’t his fault Hodor died. All pluses.

I’ve been sitting here for 10 minutes trying to figure out which one of these three is most like Phil Jackson and I think I’ve settled on Pycelle, if only because a) back issues, and b) I could see Pycelle retiring and writing a book about what an uncoachable sociopath Joffrey was.

These two always play the long game. They’d definitely rest their starters during the season to keep them fresh for the playoffs. They’re like Popovich, but nicer to reporters. It’s a manipulative nice, but still.

Think of the halftime speeches.

OLD GUYS PAST THEIR PRIME

Picture Tywin Lannister in short shorts and a tank top, with knee pads, wristbands, and mid-calf socks rising out of old Chuck Taylors.

I feel like Davos would be a much better player, but he would always defer to Stannis and it would drive every sports talking head in the country insane. “Davos has got to step up and show he has heart or this team will never win a championship.” It would be awful.

When I started making notes for this post, I wrote “Barristan Selmy = Larry Bird?” and now I have no idea where I was headed with that, but I stand by it anyway. 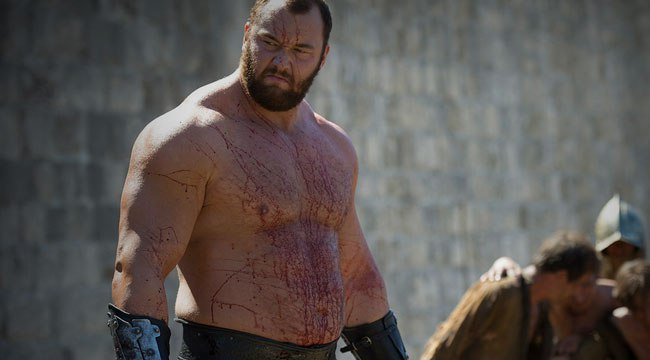 Game of Thrones is lousy with big oaf-y dudes who would make excellent enforcers off the bench for the Bulls, Knicks, or Heat teams from the early- to mid-’90s. I choose to believe the inverse of this is true, as well, and Charles Oakley should be introduced as a character no later than the season premiere of season seven. 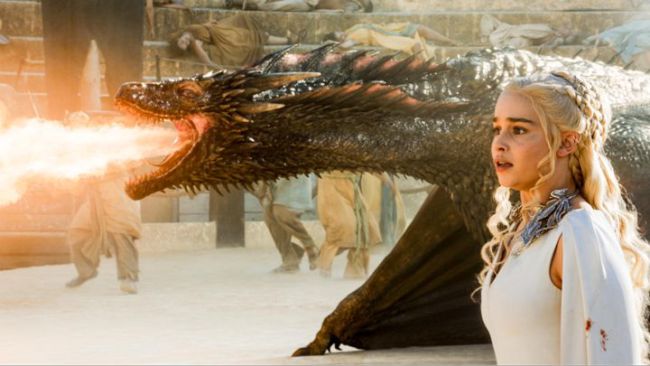 Direwolves get the nod over dragons for two reasons:

I will not debate this.

THE BEST OF THE BEST 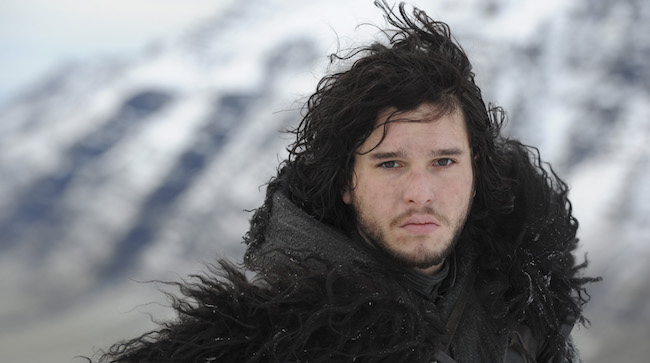 Oberyn Martell strikes me as a flashy, high-flying, sweet-shooting two-guard who puts up gaudy scoring numbers, but doesn’t put in a ton of effort on defense. Like the best possible version of Mario Hezonja. Also, and I think this is very important, “The Red Viper” would be an incredible nickname for a basketball player. Or anyone else. Anything, really. You could have an old crappy microwave that takes five full minutes to heat up leftover spaghetti, and if you started calling it “the Red Viper,” I would probably offer you $400 for it on the spot.

PRO: Can do magic. This would be very helpful. If she can bring people back from the dead she can almost certainly heal a teammate’s sprained ankle or torn ligament. Also, that whole “giving birth to an assassin made of smoke” thing could come in really handy. There’s nothing in the rulebook that says a player can’t give birth to a smoke assassin during a game and then have it leak out on the fast break for an easy lay-up.

CON: If her choker gets knocked off during the game, or if its jewel breaks from catching an elbow in the paint, we’ll have to bump her out of the top ten and put her in the category with all the old people.

Bronn is dominant. He’s not a big dunker (he can, he just doesn’t that often), but he’s got a killer midrange jump shot and knows all the little tricks and angles that you pick up through years of experience to get good shots and get to the line. Kind of like a 60 percent healthier Dwyane Wade. He’s really great at press conferences, too, tossing out jokes and dismissive one-liners. Basketball Twitter would love Bronn.

Jon Snow is tough to nail down. He’s clearly a great natural athlete and leader, and he has that chip on his shoulder that most of the greats have, but he’s also very, very emo about it all sometimes. You can’t have your best player sulking in the corner during a close game just because he had a poor shooting night and a bunch of his teammates murdered him in the third quarter and he was out for a few minutes — during which the public address announcer repeatedly insisted to the crowd that he was dead for good, even as most of the people in attendance were like “Nah” — until one of his other teammates revived him with a sponge bath in the locker room. Suck it up, Snow!

Even if he has no discernible basketball skills whatsoever (and man, how great would it be if he did and was out there dribbling a ball between his legs and stuff), he’s still a top ten player just because he’s like 20 feet tall. Can’t teach height! The only reason I don’t have him at number one is because I’m not sure he’d be able to get into every arena. And even if he could, how would he travel on road trips? He’d never fit on a plane. You’d have to pack him up in a truck like a zoo elephant, or have him drive a convertible cross-country with the top down and like 70 percent of his body hanging out. It’s a logistical nightmare.

Jaqen H’ghar is Steph Curry. I feel this in my bones. He doesn’t wear his emotions on his sleeve quite as much, but I bet when he takes off the robe and laces up his… sandals(?), he’s got a breathtaking handle on the ball and is an absolute assassin from three.

I’m admittedly cheating here by counting Jaime twice and giving him his hand back, but a) I feel like it’s worth noting that Jaime was probably the kind of absurd natural athlete who was All-State in basketball in high school and got scholarship offers from dozens of schools, but also “screwed around” with baseball after basketball season ended and was still good enough that a professional team drafted him in a later round “just in case,” and b) it’s my list and I will give people all the hands I want.

Brienne is more or less the size of the Mountain or the Hound with the sword skills of a two-handed Jaime Lannister. She’s got the best of both worlds. If we take that kind of size/skill combination and apply it to a basketball court, there’s a really short list of players you could compare her to, and one of those players is LeBron James. Which I think is pretty fair, all things considered. But even if you’re not willing to go that far because LeBron is at the far, far end of the size/skill spectrum and that comparison would pretty much require her to be the greatest warrior in all of Westeros, at the very least she’s still a prototypical stretch 4 at a time when those are at a premium.

Think about the matchup problems it would create. She could guard every position from 3 to 5, at least, but those lumbering guys in the Charles Oakley category couldn’t keep up with her or stay in front of her in the new, less physical version of the game that every grouchy retired player with a microphone has been ranting about all season. It would change the whole dynamic when she’s on the floor. There’s only one character in the whole Game of Thrones universe who could match up with her on both ends. Which conveniently brings us to…