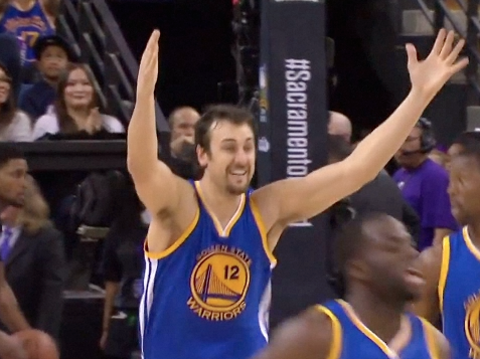 Last night DeMarcus Cousins appeared to have a good game on paper: 26 points 11 boards, three steals and four blocks. But he took one play off when Marreese Speights threw down an easy inbounds alley-oop. That wasn’t DMC’s only lapse, though, and the beneficiary, Andrew Bogut, was pretty thrilled after catching the lob from Stephen Curry.

The lob Bogut catches isn’t set up by any tricky screen actions, or off-ball movement. No, Bogut just pauses at the top of the key like he’s about to set a pin-down screen to free Klay Thompson then cuts hard to the rim and Curry times it perfectly for the jam.

After dunking it, Bogut keeps his hands in the air and has a big grin on his face all the way back down the court. Even Steph has to smile as they slap five.

Bogut was a perfect 3-of-3 from the field to go with five rebounds, four assists and two blocks in 19 minutes during the Dubs blowout win.

None of Bogut’s buckets were easier than his simple back-cut on Boogie, though, so maybe that’s why he was smiling so broadly on the way back up the court.