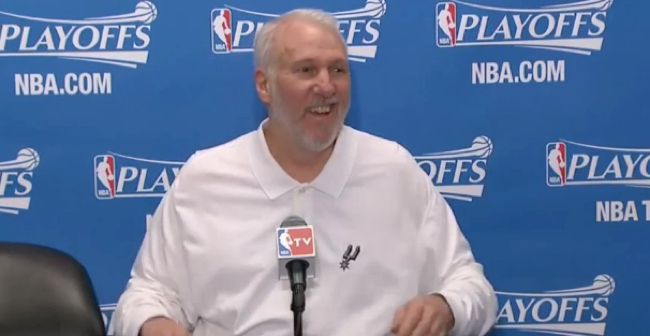 First, he continued his one-man protest against the in-game interviews the NBA foists upon him and other coaches of his ilk. In a sideline interview just prior to the start of the second quarter, he offered such expert insight as “keep shooting” when asked how to get his offense going.

Things didn’t get much better after that for the Spurs, as the Clippers took Game 1 rather easily at home, 107-92. After the game, Pop did not seem to be in the mood to discuss what went wrong.

Admittedly, some of those questions were standard boilerplate suggestions, and he doesn’t have time for that.

The best exchange may have been when a reporter failed to even ask a question, but instead provided a quick summary of his team’s ball movement and asked Pop to “talk about” it. Pop promptly replied, “everything you said was correct.” After a quick beat, he then added, “I mean how long do you want me to talk about it?”

The Spurs will have to play better in Game 2 if they’re going to even up the series before it heads to San Antonio, but the media is going to have to ask better questions if they want real answers from the best in the business. At least Pop found time to laugh at the whole thing, but we doubt that’ll happen again if they go back home down 0-2.

(Videos via The Sports Gag and NBAShowtimeHD)