For the first time in 186 days, the Warriors have lost! Bucks upset the defending champs, 108-95. pic.twitter.com/575CXgWeQp

In case you missed it at your holiday party on Saturday, the Golden State Warriors finally lost. The Milwaukee Bucks took advantage of a tired team on the last game of a seven-game road trip to end the streak at 24 consecutive wins with a 108-95 victory. It was a streak that common sense knows had to end, but that had overcome so many challenges so far it began to seem more like a physical constant. Needless to say, the loss caused some concern.

But it shouldn’t cause too much if you look at history:

For context, there was this headline regarding the upcoming 2015 college football season the last time the Warriors lost back on June 9:

From the front page of /r/CFB the last time the Warriors lost: pic.twitter.com/g8NFEhNUbc

But of course, it’s easy to look like a lot of time passes when you count the off season. I’m sure the AP Top 25 poll looked a lot more accurate when the Warriors started this streak with their first game of the season on October 27– 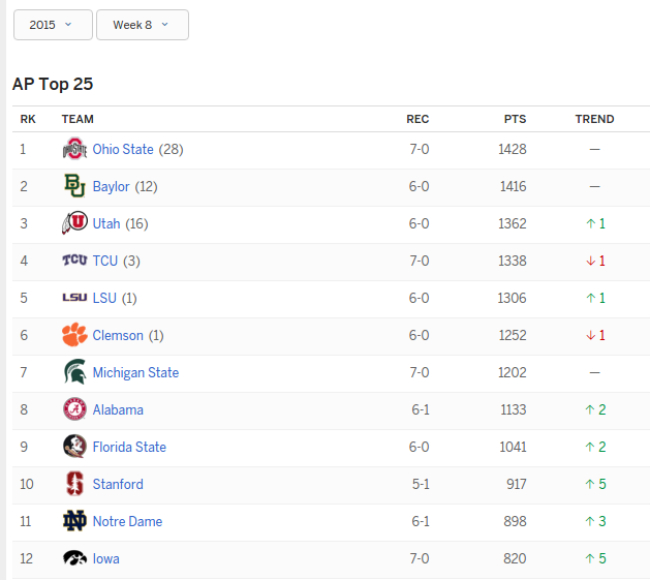 wait what are you doing up there Utah get the hell out of there.

A lot of people blamed this loss on the NBA’s penchant for scheduling back to back road games, and that was certainly a factor tonight. It didn’t help that Friday night’s game was a 2-OT thriller against the Boston Celtics that left the Warriors on fumes afterwards. Others have different theories:

If the warriors lose this season it's going to be in these stupid baby tee jerseys.

And some just want to have fun:

Even the Bucks got in on the action, rubbing it in the faces of the Warriors fans out there:

In the end though, we all knew it was coming sooner or later. While the Warriors clearly loved the streak and wanted to keep it alive as long as possible, there’s got to be an immense pressure lifted off their shoulders. Now they can just play without worrying about letting anyone down but themselves.

Well, we knew the streak had to end at some point. pic.twitter.com/o4JlGBZbLa

They say all good things must come to an end… That was fun while it lasted!!! Now it's back to the bay for some home cooking #roaracle

And the best part? It got the MC Hammer seal of approval. Nobody needs to get hurt:

Salute and Thank You #Warriors for the Greatest Run Ever !!! #DubNation ?

On to the next one!