Kevin Durant Is The Baddest Now: ‘I’m A D*ck. I Don’t Talk To The Other Team’ 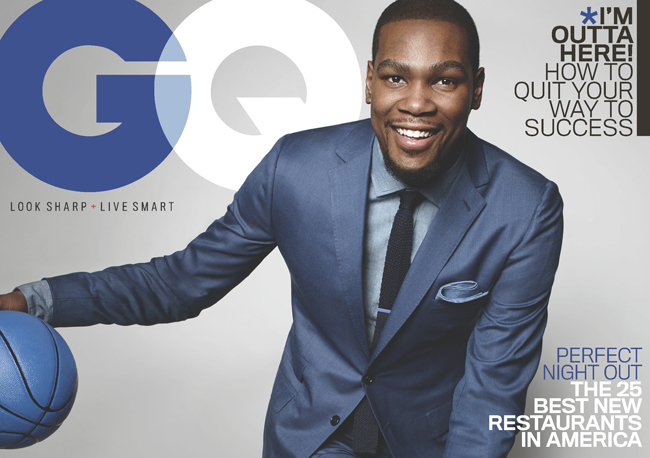 We thought it was clear during Nike’s campaign for Kevin Durant during the release of the KD VII that the tagline, “I’m the baddest,” only referred to his on-court persona. Off the court, he’s just a genial guy. But his recent comments about the media to the media over All-Star Weekend signals a slight matriculation to his off-court image. His interview with GQ’s Zach Baron, on newsstands in New York and LA today and the rest of the country next week, continues his bad guy metamorphosis.

Durant’s “hater” mentality extends beyond the sidelines. He can’t even watch other NBA teams, believing he’s cheating on his own:

“I’m a dick. I don’t talk to the other team,” Kevin Durant tells GQ’s staff writer Zach Baron. “If I fall on somebody, I throw them to the ground. I’m not helping them up.” He doesn’t seem to know where his nice guy reputation came from, considering, he says, he can’t even watch other teams play, it makes him so mad. “I just don’t like other teams or other players. I can’t sit there. I feel like I’m supporting them by watching it. I hope you have a bad game. Because I’m such a hater! I thought it was a bad trait I had. I was like, Man am I jealous? Why do I hate this guys? But I hope both of the teams lose! That’s how I feel.”

Perhaps the biggest story surrounding Durant doesn’t even involve this season, or next, it’s his impending free agency — the first of his career after re-upping with the Thunder following his rookie-scale deal. Remember, he just tweeted out his decision to re-sign, which stood in stark contrast to LeBron when he was making his free agency decision on national TV.

Exstension for 5 more years wit the #thunder….God Is Great, me and my family came a long way…I love yall man forreal, this a blessing!

When asked about the end of his Thunder deal by GQ, Durant veers off into territory that has to have OKC fans worried, and Wizards fans silently hi-fiving. Remember, Durant’s talking about the summer of 2016 here [emphasis ours]

“I was loyal,” he says of the criticism he knows awaits him if he doesn’t re-up. “If it comes down to that, I mean: I was. My deal’s up in 2016. I’ll have been here nine years. I could easily have wanted out. I could have easily not signed the extension after my rookie contract. I could have not played as hard every night. But people tend to forget.”  Durant, who admits he’s done a lot of growing up in the last three years (he finally took a summer vacation and wants to travel more, he’s getting into wine), understands that there is more at play here than just fan reactions. “Players are paid to do their jobs, no matter who’s on the court. And as superstars, you gotta lead what you have…You gotta do your job, and you gotta trust that the front office is going to do their job. It’s hard, though. You know what I’m saying? Because it’s like, shit, I want to win. Obviously our players aren’t as good as, you know, than they were before. But you have to figure it out.”

That sound you just heard was the collective gasp of Chesapeake Energy Arena season ticket holders. Reading between the lines a little, “our players aren’t as good as, you know, than [sic] they were before,” could be Durant shading OKC’s decision to trade James Harden to the Houston Rockets rather than pay him the max money he obviously — though not so obviously at the time — deserves.

Remember, the Thunder are a small-market team, and in the summer of 2012 they had to make a decision about re-signing defensive stalwart, Serge Ibaka, or James Harden. They couldn’t afford to pay both their market price, so they swung a deal with the Rockets to take Beard and kept their improving power forward.

Except, the players the Thunder got back haven’t accounted for the loss of Harden, and they haven’t returned to the Finals since their last season with James coming off the bench as the Sixth Man of the Year. Jeremy Lamb has largely been a disappointment, and the first-round pick they got out of it turned into Steven Adams, a good young center, but not a centerpiece like James. We’re pretty sure both sides agree Daryl Morey got the better of the bespectacled Sam Presti that fall.

But does that mean KD goes home to Washington, or elsewhere for a better chance at a title? We don’t know and anybody who claims to know is merely speculating. We doubt even KD knows; there’s a lot of time between now and July of 2016.

We always thought the Thunder were the frontrunners for Durant’s services in 2016, but their struggles this season with Durant and Russell Westbrook both missing time, combined with his comments to GQ, has suddenly turned his free agency into a very real “who you got?”

Kevin Durant is a bad man, and maybe that’s what he feels he has to become to claim the Larry O’Brien trophy. Just know that a bad man will be making his free agency decision, and that might not fall in line with the KD so many young fans fell in love with in the wake of LeBron’s original ‘Decision.’