Kyrie Irving: ‘I’m Going To Will Myself To Play’ In NBA Finals Despite Knee Issues 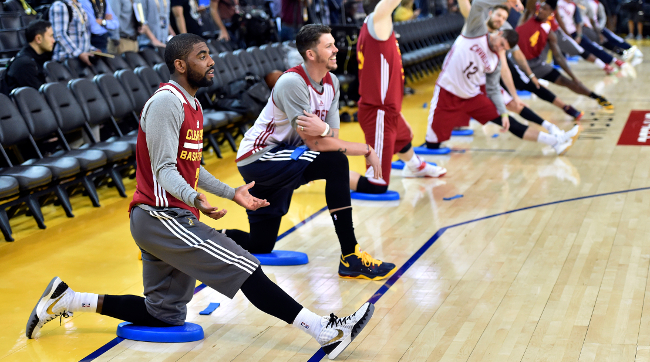 Among a myriad of other reasons, one of the things that makes the upcoming NBA Finals so fraught with anticipation is the chance to see two of the league’s most electrifying point guards – Kyrie Irving and Steph Curry – battle it out.

The only problem is that Irving has been bothered by knee tendonitis for most of the postseason, and it doesn’t look like it’s letting up any time soon. The hope was that, after sweeping the Atlanta Hawks in the Eastern Conference Finals, 10 days of R&R would do the trick. But participating in practice Sunday, coach David Blatt admitted that Irving still wasn’t 100 percent yet.

Now, less than 24 hours before tip-off of Game 1, the only thing he still has in common with Uncle Drew are the rickety old knees, but that won’t stop him from suiting up and giving it a go anyway. Via Dave McMenamin of ESPN.com:

“It’s an adjustment, but it’s what it is at this point,” Irving said at Finals media day on Wednesday. “But I’m just going to go out there and will myself to play.”

Irving’s health remains a worrisome unknown in Cleveland’s championship equation, and without him operating at full capacity, the offensive load on LeBron James might prove too much to bear unless the Cavs are able to coax consistent contributions from J.R. Smith and Iman Shumpert. For all of Matthew Dellavedova‘s antics/heroics, there’s no way he can sufficiently stand in for Irving against an offensive and defensive juggernaut like the Warriors.

Thankfully, all of these questions will be answered once things (finally) get underway Thursday at 9 p.m. ET on ABC.