Macklemore went sneaker shopping with Complex recently, and the rapper talked about the different type of Jordans he prefers today and the sneakers he had growing up in Seattle.

However, the best part of the video comes at around the 3:30 mark, where the “Thrift Shop” singer talks about meeting MJ himself, and showing Jordan his custom Air Jordan colorways. Assuredly, Macklemore was looking for some feedback from the legend, but it probably didn’t quite go as he planned. In fact, Jordan shut down the shoe, as Macklemore describes in the video:

“I showed him the shoe, I have two pairs, the greens and the clays, and he was like ‘I don’t like green. F*ck green. It reminds me of some Christmas sh*t. No one is trying to wear some Christmas shoes.’ Just completely discarded my color.”

Imagine getting your one chance to meet Michael Jordan, perhaps the greatest basketball player of all time, only to be completely dismissed when you try and impress him by comparing your custom-mades to “some Christmas sh*t.” Classic MJ.

At the very least, Macklemore was able to snap a selfie with Jordan, who’s notorious for not taking pics, so hopefully that’s enough consolation. 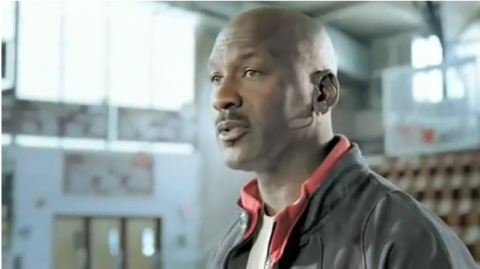 At his career peak Michael Jordan held two, equally as superlative titles: world’s best basketball player, and world’s best endorser. Because of both, MJ starred in dozens of commercials both during and after his playing days. We’ve collected his 20 best here today, starting with …

20. Hanes – “The Mustache”
I don’t even like this commercial. Or airplanes. Or underwear. But I couldn’t make a list of Jordan’s top commercials without including the unfortunate mustache. Sue me!

19. Air Jordan XX
Spike Lee made plenty of appearances in Jordan commercials as Mars Blackmon (who we’ll get to later in the list). But this is one of his few appearances as himself. The commercial has good music, it’s motivating, and he reads from a giant book. You literally couldn’t ask for anything else.

18. Nike – Charles Barkley Show
This really isn’t even a Jordan commercial. It’s for Charles Barkley‘s shoe after Jordan’s first retirement. But that won’t stop me from putting it on the list because Jordan is in it, he argues with Barkley and for some reason Humpty Hump is there.

17. Air Jordan XX – Namond Brice
Another commercial for the 20th Air Jordan and it involves the actor who played Namond Brice on “The Wire” talking on a bus. I miss Namond. I hope he’s doing well and enjoys living with the Colvins.

16. McDonald’s – McBacon Deluxe
There are a lot of Jordan commercials. So throughout the list I’m grouping similar commercials together. Here’s the McDonald’s group. I like this McBacon Deluxe as one the best because it has Barkley and Larry Bird trying to guard Sylvester and the Tasmanian Devil. The ’90s were weird.

15. Jordan – Work Before Glory
A lot of these newer Jordan commercials are pretty similar. They’re all inspirational and a minute long. But this one is nice. Lots of Jordan highlights and a throwback to the, “it’s not about the shoes” line.

14. Gentle Treatment – 1986
This commercial should probably be higher on the list but decisions had to be made. The message is pretty simple: Use Gentle Treatment on your hair and Michael Jordan might approach you in an empty hallway.

13. Jordan – Never say Never
In this commercial he says you might see him playing at 50. Well, that’s coming on Sunday so, we’ll see. Also, could he actually average double figures in points at this age?

9. Coke
Billy is going to need to stop forgetting the Coca-Cola Classic or he’s going to stop getting invited to the tree house.

8. Air Jordan I
Description: This commercial is great because of its importance. And, don’t discount its space-engine sound effects.

7. Air Jordan VII – Hare Jordan
I like puns. This commercial has multiple puns, and Bugs Bunny, and Porky the Pig. Please don’t hate me for my Looney Tunes love.

6. Jordan vs.
Here’s the “Jordan vs.” category. The best one is clearly Jordan vs. himself, but subsequent matchups versus Santa and Mia Hamm aren’t bad.

5. Banned
I would argue that few things helped grow the Jordan brand more than the NBA banning the shoe. Here’s the ad that sparked the growth.

3. Mars Blackmon Category
There are few greater advertising campaigns than Spike Lee as Mars Blackmon. All of the commercials deserved to be on the list, but that would’ve just turned this list into half Mars Blackmon commercials. So here’s my favorite. Little Richard plays a genie.

2. Gatorade – Be Like Mike
I warn you, if you watch this video then the song will get stuck in your head. It’s a fact of life. But yeah, this iconic commercial has everything you’d want in an advertisement: happiness, basketball and kids singing.

1. McDonald’s – Jordan vs. Bird
I really don’t know what Jordan has to gain in this commercial. If he wins, he gets to keep the Big Mac that he bought and was going to eat. If he losses, he has no lunch. Bird duped him and now his lunch is cold. Still, it’s the best.