NBA Self-Isolation Watch Week 10: You’ve Got A Friend In Me

Hi and welcome back, my dear isolationists, to Week 10. You probably didn’t expect to still be here — me neither! — but here is indeed where we are, together. Given that disbelief, I don’t really have a good pep talk prepared, but I do want to say thank you for following along as we followed along with NBA players attempting to navigate this suspension of their season and, like, time as we know it. We’re all, in fact, doing great because we’re also all doing the best we can. Except for P.J. Tucker, he is actually doing phenomenally. 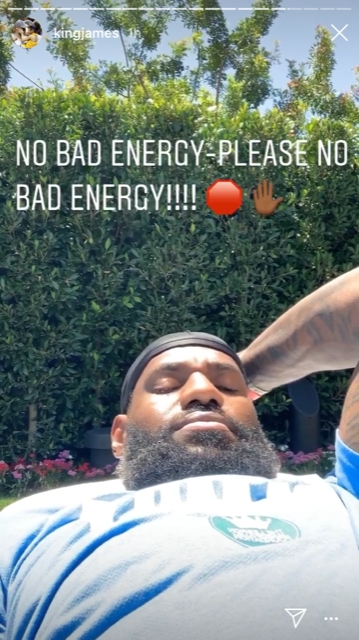 What better way to start this week’s Iso Watch than by setting our intention for the week that was and the one that will be. Here to help with that is LeBron James. While I would extend a selfish wish that James had chosen to put forth this missive to the universe back when 2020 was still a twinkle in our eyes, we simply must accept it now and be grateful. I propose a toast to this solemn plea and oh — 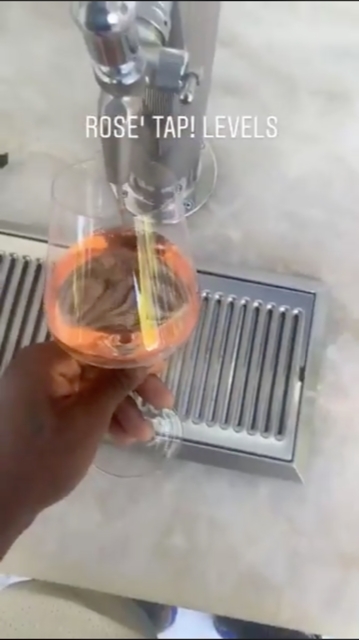 — I see, James you have rosé on tap, wonderful. Salut!

Giannis just LOST IT listening to One Direction 🤣 (via @Giannis_An34) pic.twitter.com/o2uzWoZsy9

Another powerful omen to start — end? Acknowledge time still passes? — the week. If you are, like me, not a fan of One Direction but acknowledge some part of their vast song library is lodged in your head rent free, or if you are a fan of the Freak, or if you are not immune to joy, then this will be a wonderful 0:52 seconds for you. 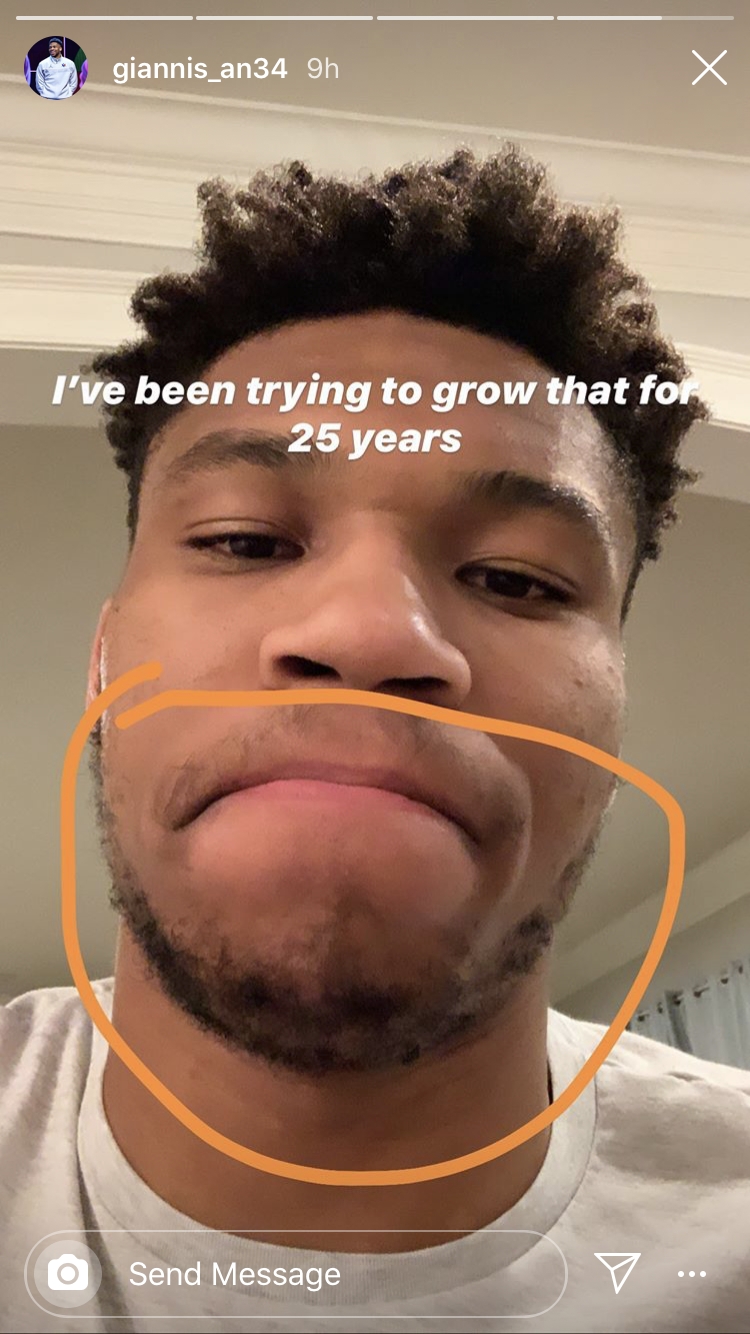 Rating: When “What Makes You Beautiful” hits? That’s when I worried for my guy’s noggin’ knocking the window, and of course my heart!

-To infinity and beyond-

It was Westbrook’s son Noah’s third birthday this week, and the little dude is a huge Toy Story fan. Naturally, he dressed up at Buzz Lightyear, and the elder Westbrook came through as Woody. It’s sort of a natural fit, and I’m not entirely sure that this wasn’t one of his pieces when his tunnel looks entered into their metamodernism phase.

Rating: Do you think Durant sits in the dark and listens to Randy Newman’s “You’ve Got A Friend In Me”? I do. Anyway this party looks cute as hell. 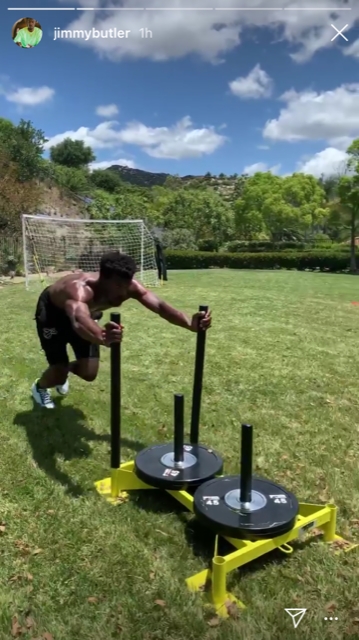 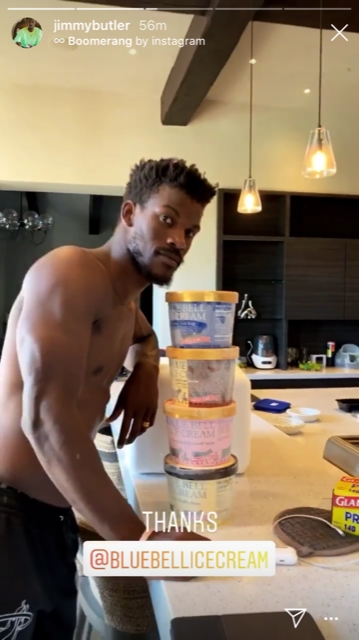 Jimmy Butler is BACK and he is SHOVING heavily weights around his backyard between the hours of WAKING and DESSERT. We now know that’s his cut off because look what has arrived, fresh and frosty for him, four huge things of ice cream that he will put back before heading to bed.

@luxurykidscarclub thanks for lacing baby girl wit the new bent.. she feelin it 🙏🏽💪🏾👌🏾

P.J. Tucker is adept at taking care of those entrusted to him. He did it with Kyle Lowry, DeMar DeRozan, the Raptors, and kind of the whole entire city of Toronto, and now, sure, he does it with James Harden. Of course, we realize that to his family this is simply second nature, but it is nice to be treated to a glimpse of that care, like when he got his daughter a matching mini Bentley convertible this week.

Rating: Petition to make Tucker’s new nickname Tuck-me-in because that’s what watching him, on court or off, feels like. 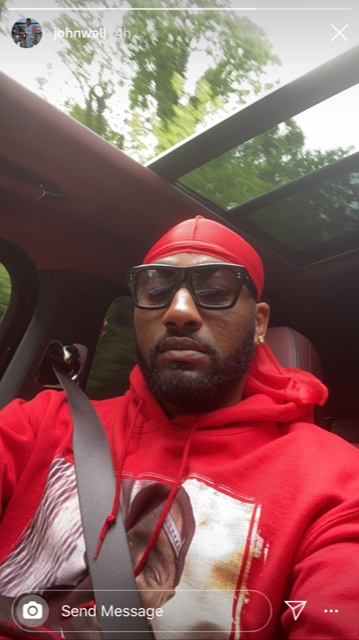 Here’s Wall with a gentle reminder that just because we can’t really go anywhere yet, and probably shouldn’t if we can, we can always go sit in our cars should we have one. Honestly for as long as we need to.

Rating: Open the sunroof, moonroof, window, whatever you got, put on your sunglasses and a complimentary outfit, just pretend. 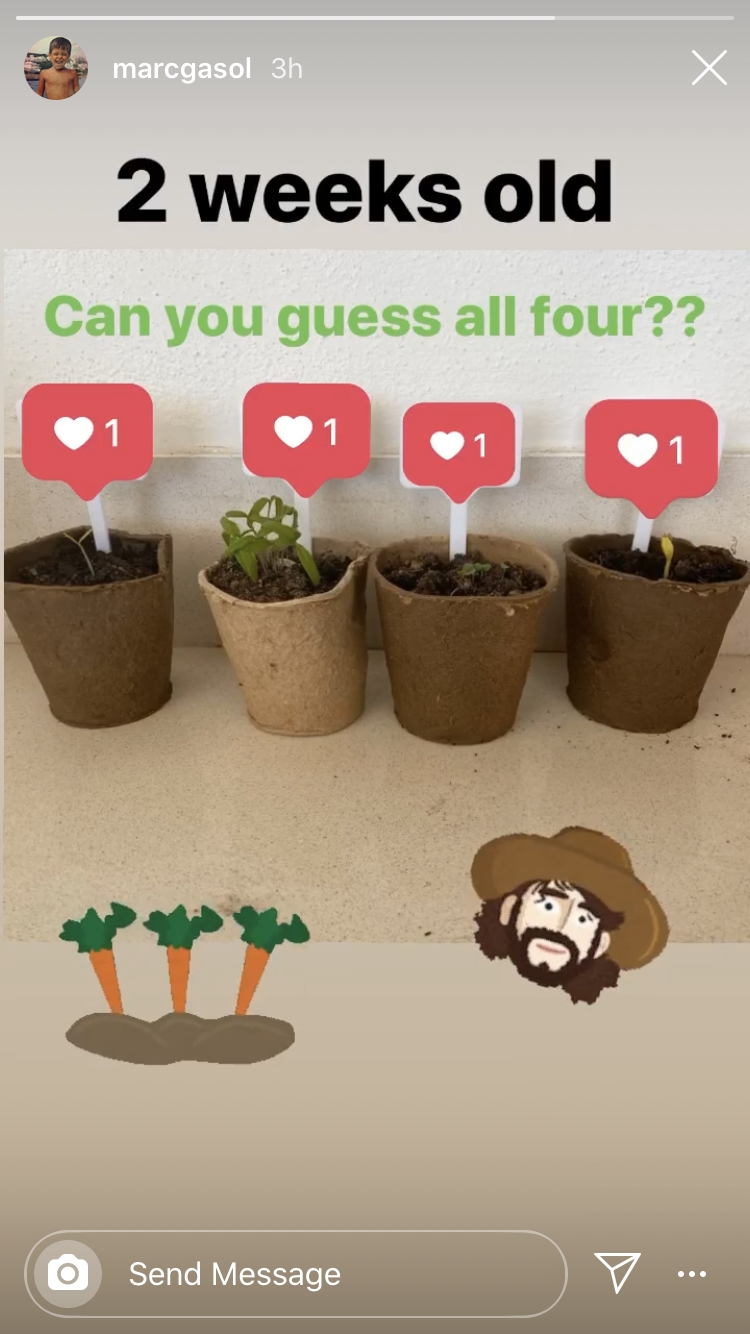 Big Spain has long had a green thumb, and in addition to that, the man is a nurturer. He’s used his ISO time to get a jump on his vegetable garden, raising up these little seedlings right. I can’t guess the identity of one, let alone all four, based on their frilly, hopeful green tops alone, but that is why Marc Gasol is a more complete human being than I.

Rating: These are compostable pots, too, so he’s just gonna pop these things right in the warm dirt with his huge and gentle hands, water them, care for them, until their roots bust out into the open dirt. Damn I’ve never wanted to be a tiny plant under the care of Marc Gasol so bad in my life, and this isn’t even the first time!

To me, this is the modern remake of A Kid in King Arthur’s Court, but Simmons is just the age he is now, blasted back to the past in his around the house clothes, holding a goblet of wine and training knights up on the practicality of perimeter defense.

Rating: They ask him to take part in some jousting but he must make excuses, for jousting is the medieval equivalent of shooting and he’s just not quite there yet.

Sitting in cars was hot this week. Melo looked about a thousand times happier to be in his than Wall did, but hey, a car won’t judge you for the mood you bring to its interior. Yes, this is the caliber of pandemic content we’ve arrived at, reviewing basketball players sitting in their cars.

Rating: And you know what? It’s great.

I got a flat on my bike ride …. but it turned into some fire pics….. #glasshalffull

McGee looked on the bright side this week, his bike got a flat when he was out for a ride but the occasion turned into the perfect time for a photoshoot. We’ve got “pensive,” “thoughtful,” “curious,” and “when does this bus come?” We’ve got proper hydration with a Gatorade on deck. We’ve got matching accessories to buildings. We’ve got a bike seat so high it has a different altitude.

Rating: We’ve got Vogue on the line and they want it. 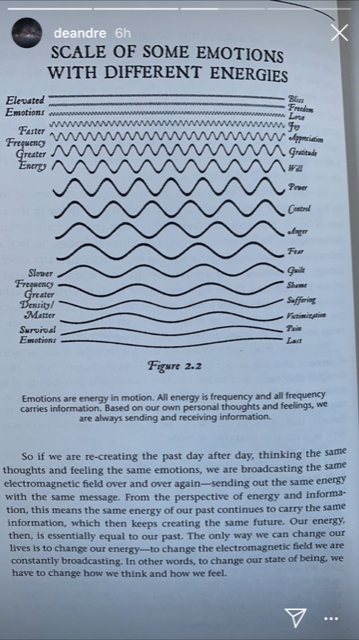 Jordan is a person who is intuitive and open about his mindfulness practices, and he shared a page out of his own book. Does Lust being a flat line and a slower frequency mean it is always just humming there, the white noise of horniness? And how about Freedom being a tight, successive series of tiny little spikes? Can we get Jordan to decode this?

Rating: Is living the ultimate interpretation?

Last week, Russell had a baby chimpanzee in his house and while wary, we hoped it was the end of that. But no, he went in a pool with a panther cub around his neck and then lined up with several adolescent white tigers, capped the day off by riding an elephant. Maybe it was for conservation efforts! But this needs a little context.

Rating: If we learned anything from Tiger King it’s simply, no. 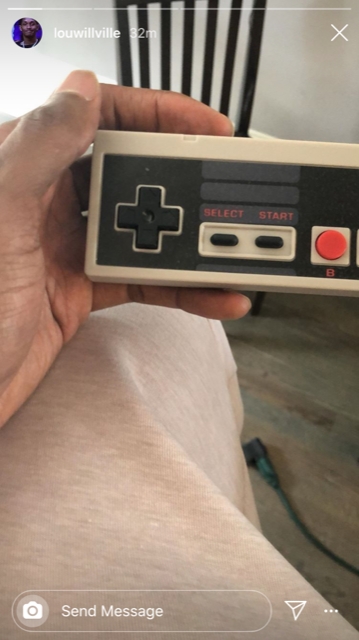 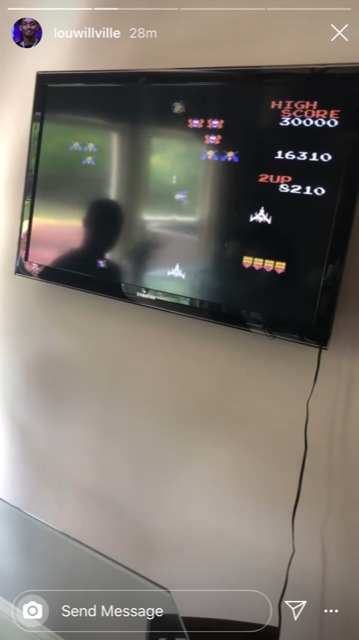 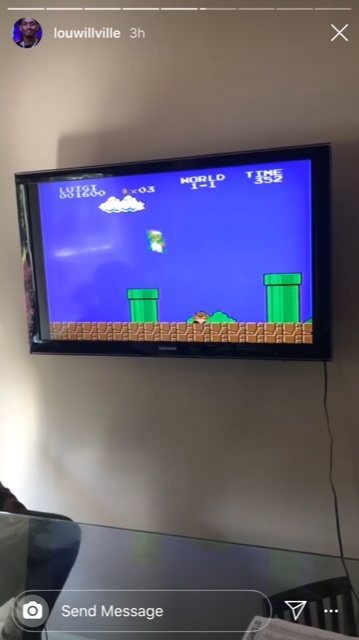 Williams either dusted off or purchased anew an old Nintendo and proceeded to be completely captivated by all 8 bits. He played Galaga, he played Mario, you could see his silhouette in the TV screen and his posture was impeccable.

Rating: I would take a Duck Hunt tournament over NBA 2K any day.

Some background: Before this season started, Hart spent much of his summer getting to know New Orleans. He visited its monuments, saw some nightlife, but a thing he kept coming back to were beignets. He ate some every week and would share the experience with a profound joy. This one, in a solemn black and white no less, really hit.

Walker’s Great Dane pup (yes, still a puppy) got stuck in his pool, but handled it the same way you probably do when you’re too nervous to jump in and instead opt to “acclimatize” as you pretend to be casual. Zola, Walker’s other dog, was a good lifeguard. 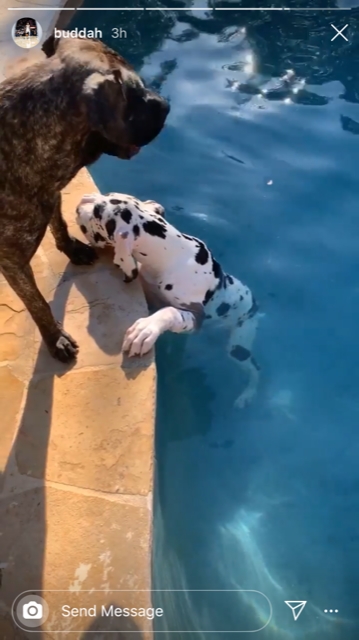 Later, a professional photographer came for a visit and captured a true tender moment, man and 150 pound child.

Been a big couple weeks for Isaac! He got engaged last week and now, it seems, he is also betrothed to the sea. 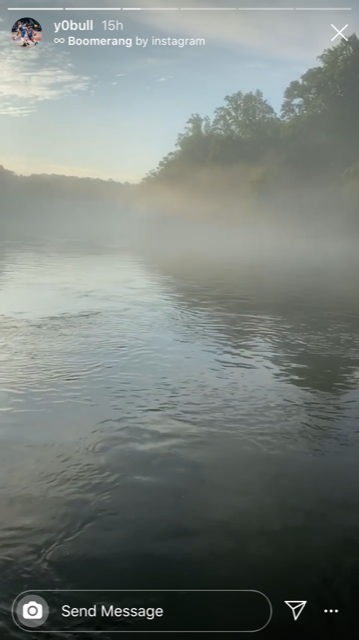 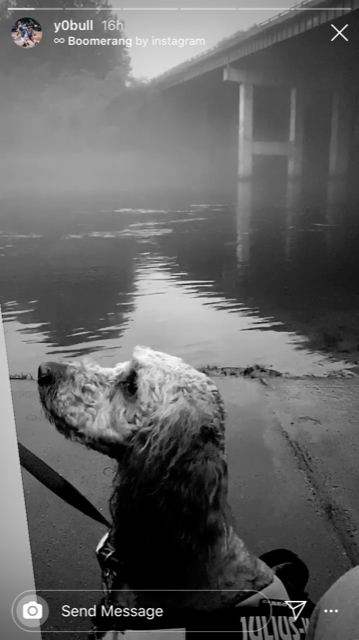 Bullock went on a misty river ramble right out of Mark Twain’s — or maybe less problematically Walt Whitman’s, but really who knows — wildest dreams. He brought his loyal Doodle along with him.

Rating: He also may have been venturing to find his way back from the Knicks practice facility that literally borders Sleepy Hollow, NY. 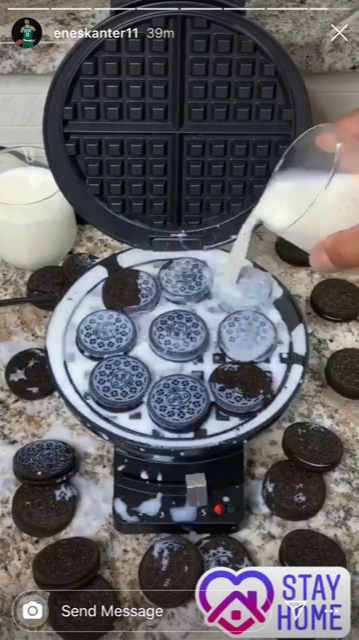 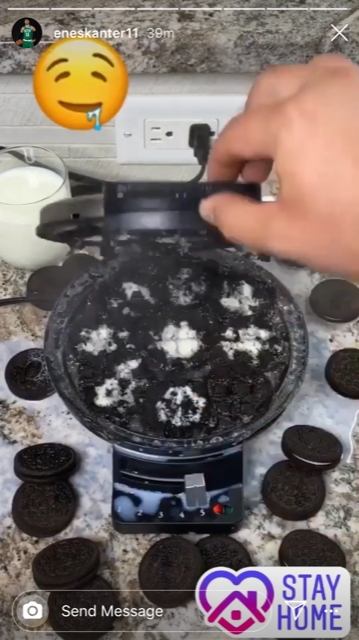 Kanter continues! It is clear he will never stop. Whenever it comes time to safely compete again, he will insist the Celtics buy several (because he will break them, every time) waffle irons for their team kitchen so he can chase his true passion of putting increasingly messed up combinations in them as if he were Galileo, permeated with an all-encompassing cosmic goal.

Rating: Find what you love and you’ll never have a working waffle maker one day in your life. 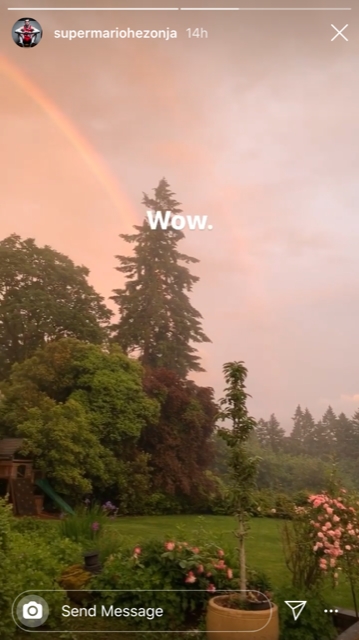 Checking in Hezonja and yep, he still seems to be spending isolation at Versailles and yep, it’s still an intoxicatingly magical place bursting with new pink buds, sweet droplets of fresh dew hangin’ off everything and what’s that there as he pans, oh right, a rainbow across a a cotton candy sky. 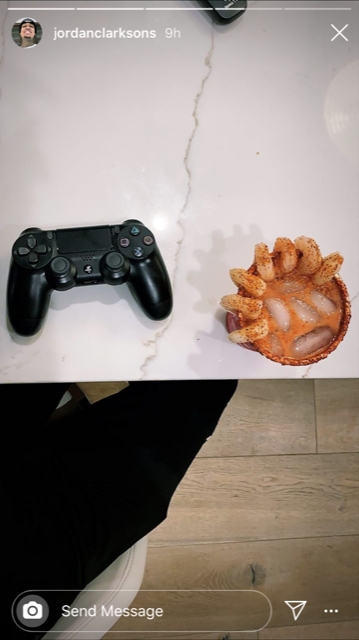 Clarkson continues to treat these ten weeks of ISO as nothing more than an extended period of personal downtime. He prepared himself an immaculate shrimp cocktail and is ready to game without remorse.

Rating: Just do one thing for yourself every day with the care that Jordan Clarkson does everything. 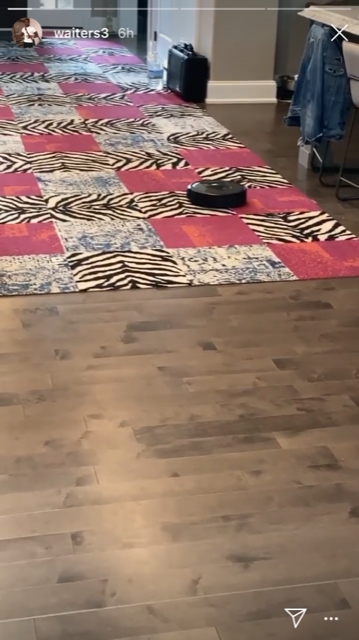 Rating: Or perhaps he’s transfixed by a thing with wheels free to roam without human intervention. 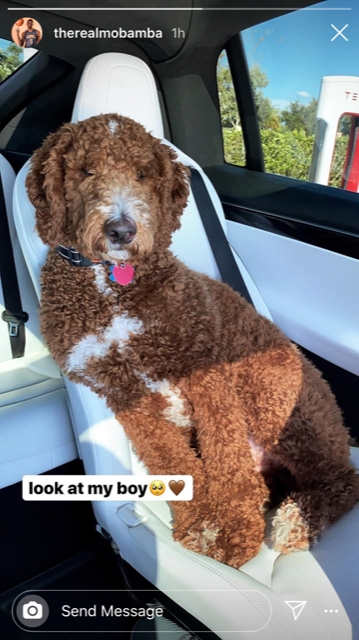 Bamba took a Mo’ment (sorry) to admire his majestic beast as it reclined in its white leather car seat, resplendent.

Rating: It really is a great time to appreciate what you have, even if the dog in question here probably has more than all of us. 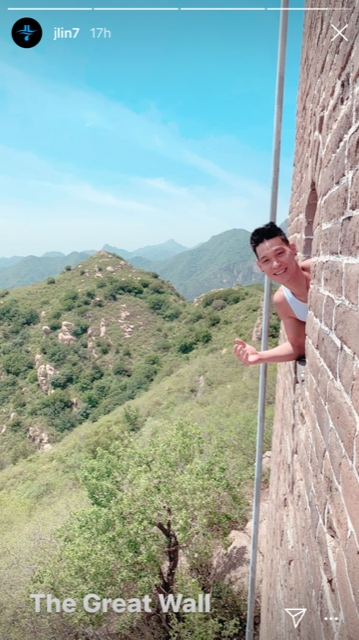 Here’s Lin popping his head out of one ancient window on a recent trip to the Greatest Wall of them all. It’s almost like a message from the future that we’ll eventually be able to travel again, but also a simultaneous suggestion to learn from the past. 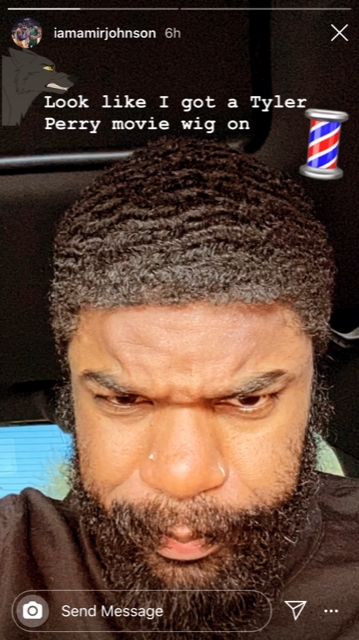 Seeing a lot from Amir this ISO and if this is a pandemic’s silver lining, so be it. He was worried his hair was turning into a shapely wig out of a Tyler Perry movie, maybe Nobody’s Fool, just like him.

Rating: A fan favorite wig, in any case. 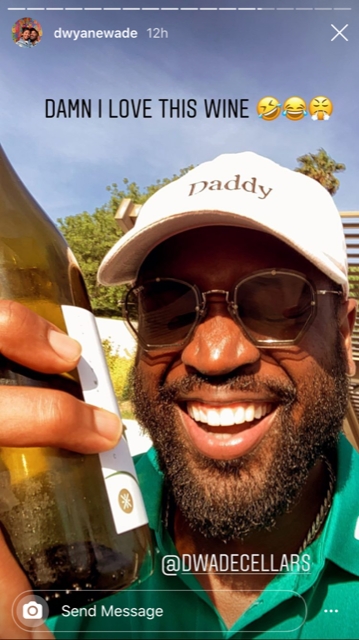 Move over LeBron, the NBA has itself a new Wine Dad and damn, he loves this wine.

Rating: It’s there on the hat, too, in case you weren’t sure.