While NBA Self-Isolation Watch has been primarily concerned with the pastimes and activities of basketball players since the onset of the COVID-19 pandemic, and as much as it can start to feel like it as we all live in varying states of lockdown, the things that get covered in this column aren’t happening in a vacuum. You could say, and I hope you do, that the nuance even in what is meant to be a lighthearted break during this very anxious time has always been about experiencing what is going on globally with solidarity, for the sake of comfort, of relief.

There can be neither while people of color are targeted and murdered in broad daylight, on video, without recourse. The killing of George Floyd in Minneapolis this week, and the killing of Ahmaud Arbery in late February, exposed the cruelty and terror experienced by black communities and communities of color regularly and reverberated through the NBA. If you are angry, and I hope you are, you can work to have uncomfortable conversations with friends and family and be an anti-racist advocate when you witness marginalization and racialized violence. If you’re financially able, you can also donate to support local organizations like the Minnesota Freedom Fund.

Thanks and thanks, as always, for being here.

Let’s ease into this one. For ourselves, like when you stretch before a prolonged burst of activity but this time for your heart, and for the sake of really taking this photo in. My initial thought is that this is an old photo that Gay shared after he found it doing what we all have, scrolling back through photos on our phones, nostalgic for a few months ago. His caption backs that up. But there is still a freshness and jolting quality to the picture, mostly thanks to Kyle Lowry popping up right in the foreground, grinning in sunglasses. Behind and to either side of him, his friends, DeMar DeRozan and Rudy Gay, in matching patterns. Gay’s gaz has caught on something in the middle distance and DeRozan looks as if he’s waiting, in no real hurry, for a response to something he’s just said. Lowry is, as always, perfect.

Rating: It’s like waking up from the most wonderful dream you don’t remember having.

Porter Jr. took a much needed break this past long weekend from worrying about the deer who frolic in his backyard. The definitive answer to whether he’s transfixed or terrified of them remains unclear, but it was nice to see him relaxing in the pool, reclined on what must be one of the world’s largest unicorn flotation devices.

Rating: My Memorial Day going forward is celebrating the first time I saw this photo. 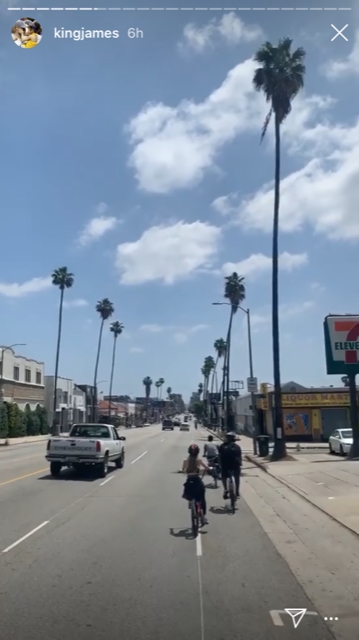 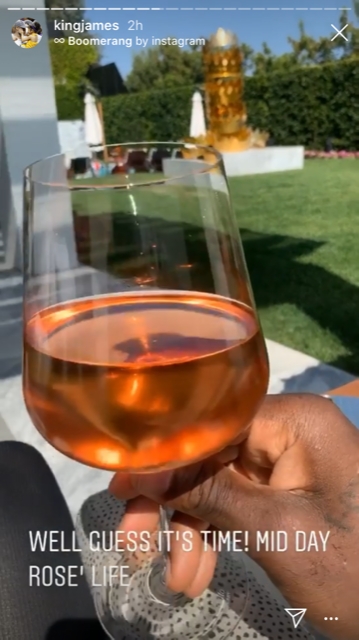 James went for a bike ride with his family this week and like the enhanced dad he is, filmed the excursion in its entirety. This included all the big sights like that 7-11 coming up on the right and the towering palm trees. He got home and relaxed in the yard, rewarding himself with rose straight from his personal tap.

Jimmy Butler played dominoes outside in the sunshine with the intense concentration only Jimmy Butler could when playing a relaxed, fun game.

Rating: Right after this he stared down an ice cream cone until it melted completely, he didn’t eat it, the pleasure from watching it return to its natural form was enough. 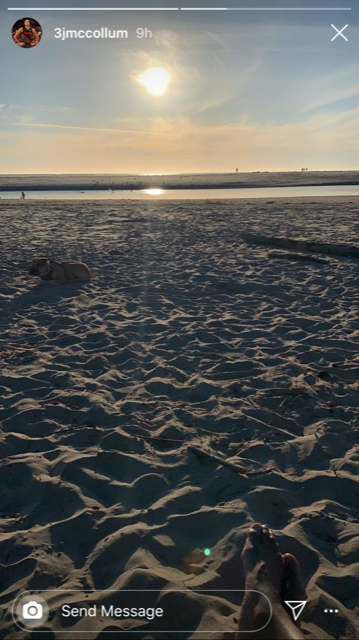 McCollum took his growing gigantic puppy to a peaceful Pacific Northwest beach to watch the sunset.

Rating: If we could get a livestream of this going, that’d be great. 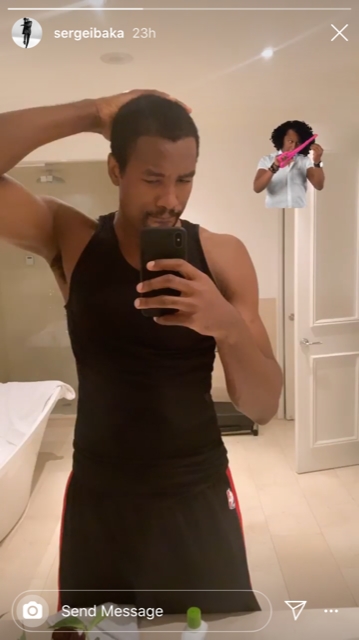 Ibaka returned to Toronto this week with a little more than he left with — hair! Even when slacking, the number one truth in Ibaka’s universe is to always grow handsomer.

Rating: Powerful physics, even greater than gravity, at work over here.

Taking social distancing seriously, Harkless went out for a spin on the ocean during the holiday weekend. Keeping your distance on the wide blue yonder is a love shared by pirates, sea turtles and now, Maurice Harkless.

Rating: Also no better way to socially distance your soul, that is realize its tiny impermanence, than spending some time staring out to sea.

Walker met original (steal your) Wife Guy, Tony Parker, and the two talked shop at Parker’s palatial looking place. Walker was very thrilled with the encounter and hopefully Parker shared some solid Spurs secrets, like why the Coyote wears a shirt but no pants.

Rating: Lonnie Walker is so nice. 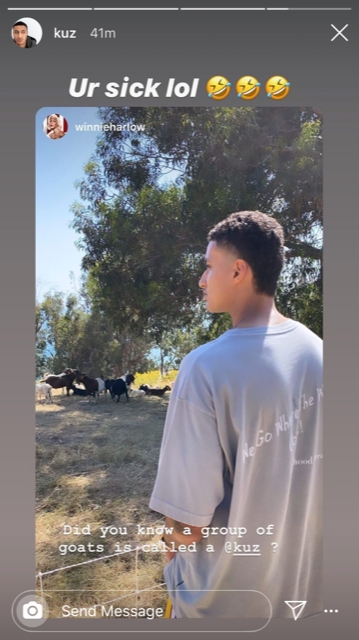 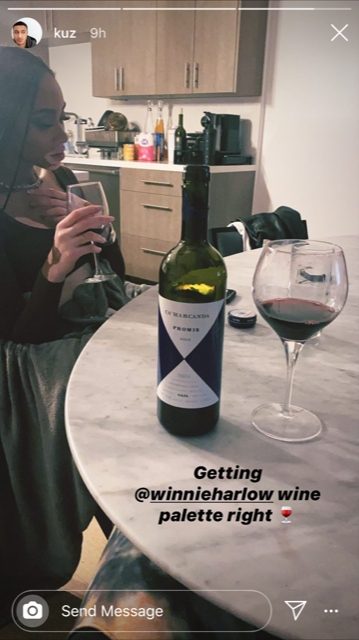 Kuzma has entered into an entirely new phase of isolation and that is, one no longer on his own! Is this NBA Self-Isolation Watch breaking news? Kuzma and model Winnie Harlow are dating! It started with pretty cute comments on each other’s IG’s and ended with Harlow taking an extended visit to Kuzma’s L.A. home where they visited some goats and he regaled her with all the things he knows about wine from LeBron James. It’s really cute!

Rating: Does Kuzma need to be disqualified from NBA Self-Isolation Watch MVP candidacy? 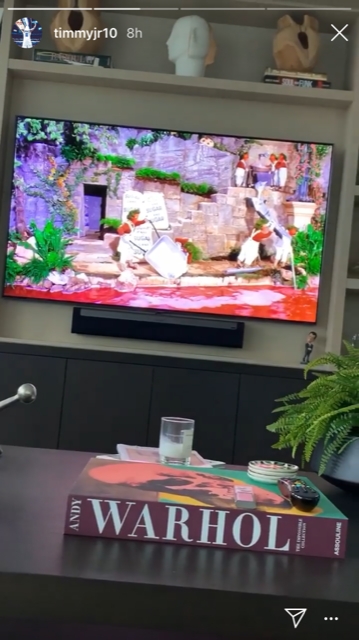 I have to assume Hardaway Jr. was watching the original Charlie and the Chocolate Factory for artistic research, maybe inspirations for the pop art movement given his coffee table book, because that movie is a glaring terror!

Rating: Wonka is a menace with a god complex at best, a common clown at worst! 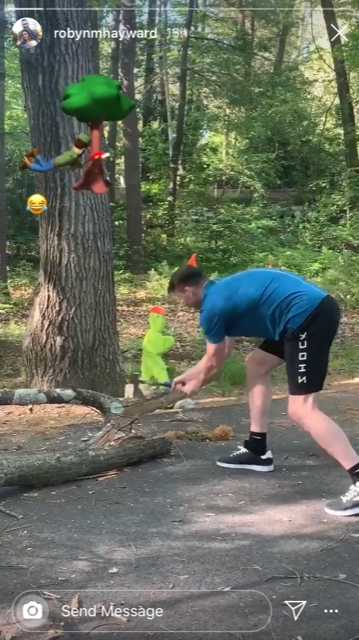 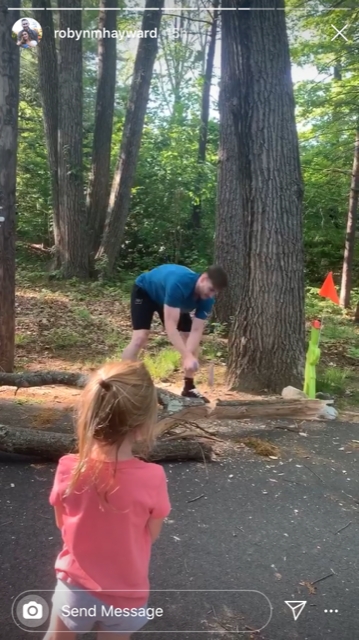 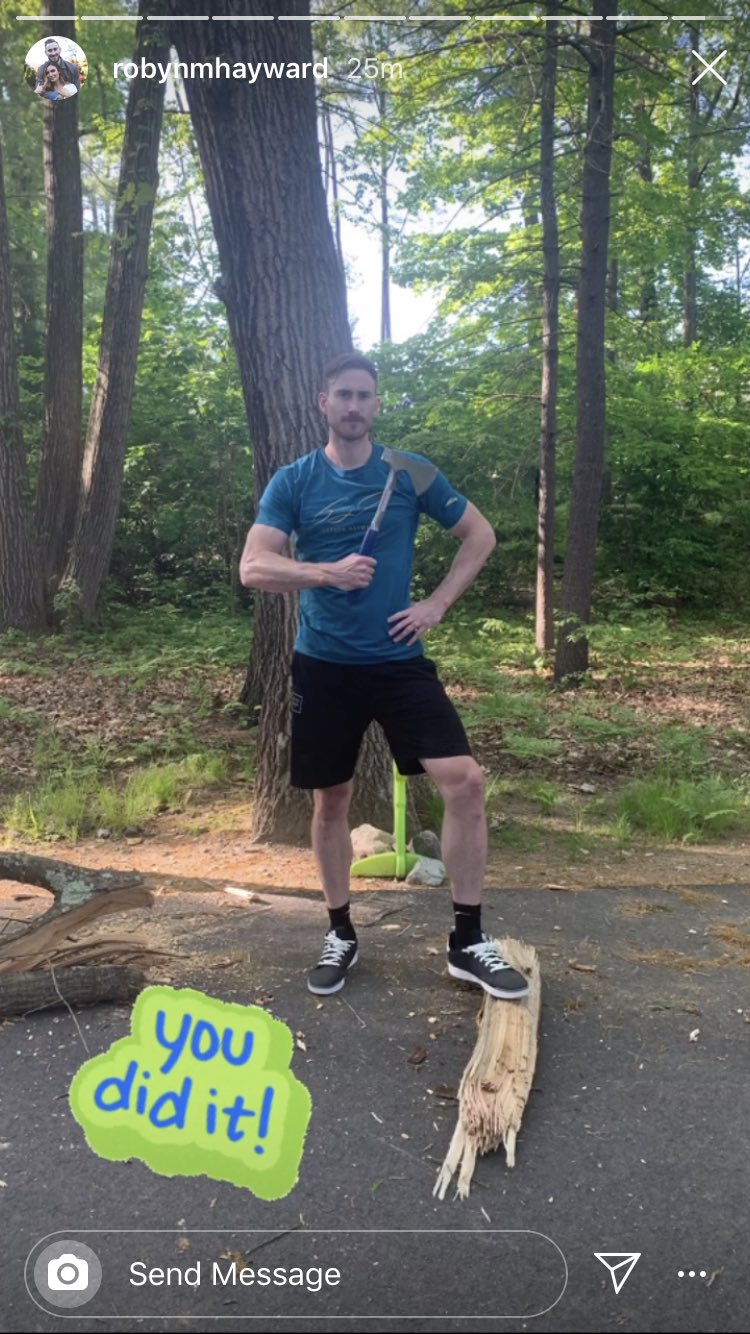 Aside from What’s App-ing his wife from the other room, Hayward has been off the grid this ISO. That changed this week when he came swinging (and swinging, and swinging) out of obscurity with a tiny hatchet he was prepared to weld for ever against the toughest defensive opponent he’s ever faced, a section of a dead tree in his driveway. His family looked on first in support, then judgement, as he made slow progress and took a few, huffing breaks. Eventually, he prevailed, and broke that little section off the larger whole, still lying in his driveway.

Rating: The Celtics legacy of greatness lives on. 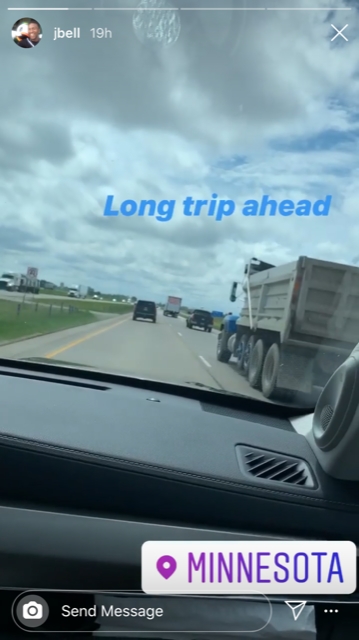 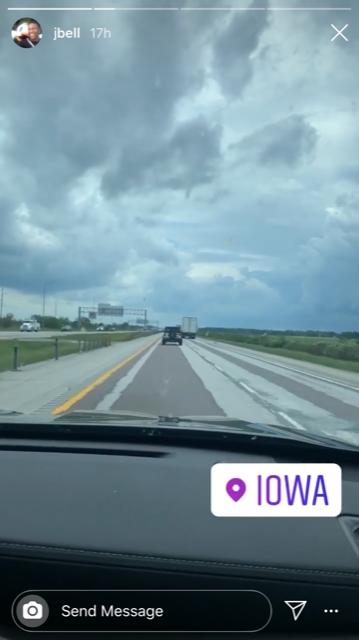 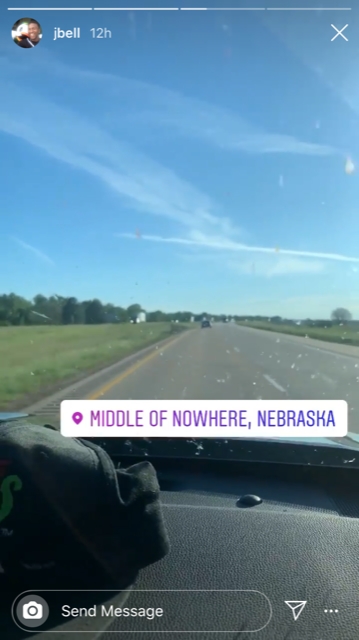 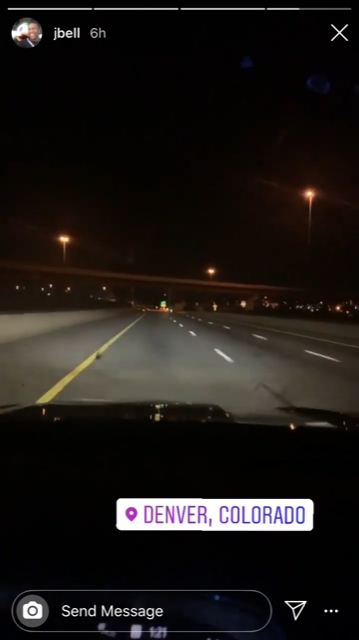 Bell has had a long journey in his career and an even longer journey this week, when he drove from Minnesota, through Iowa, an aptly tagged “Middle of Nowhere, Nebraska”. At the end of his first day on the road he’d reached Denver. He either called it a night there or chugged on a little farther, because the morning of day two saw him hitting the open road around Salt Lake City, a good 8 hours from where the sun had last set on his journey. I hope he slept? 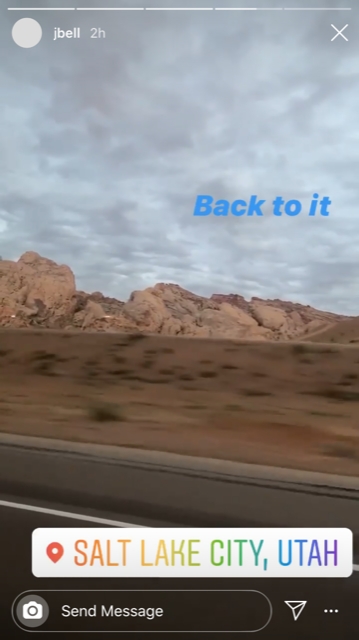 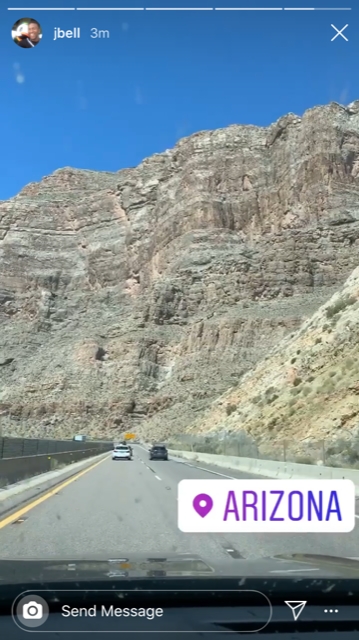 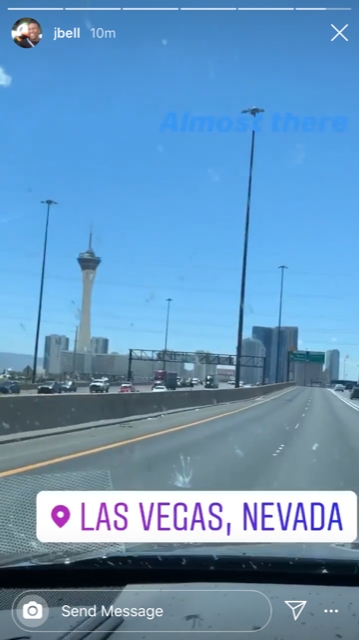 He hit the very north-western tip of Arizona coming down Highway 15, and passed through the perma-mirage of Las Vegas. Please note the dead bug splatter accumulation on Bell’s windshield, that’s over 2,000 miles of insects. 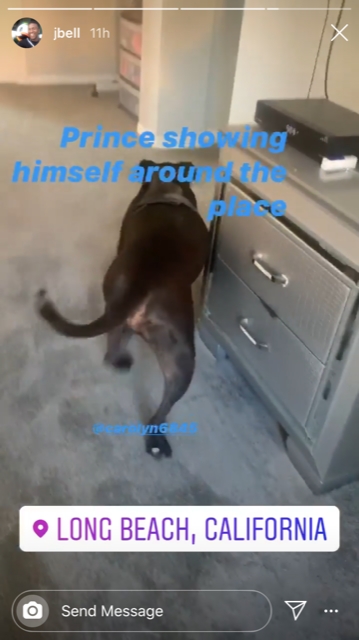 Finally, Bell pulled into his hometown of Long Beach, California. I bet he’d never been so happy to see the ocean! His dog made itself right at home while a road weary Bell looked really happy to see his mom.

Rating: Honestly, the only version of “On The Road” I’d be willing to read again. 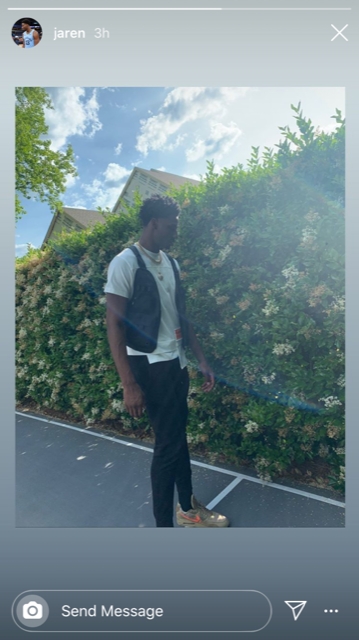 Jackson Jr. has graciously tossed us a few of his ISO looks these last eleven weeks, ranging from “going to the gas station” to this, “standing beside flowering hedge in dreamy, introspective lighting”. Each is a real gift and welcome divergence from “same sad inside clothes everyday”.

Rating: The lens flare, the vest, the range. 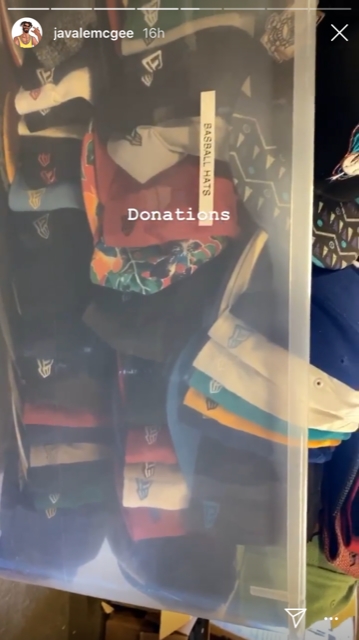 McGee got into what I’m sure many have since being stuck at home through a season change or just feeling like “well I guess there’s no better time to look through all the dumb junk I live with” and cleaned out his closet. He started with ball caps and it really only got that far which, fair, because there were a ton of hats.

Rating: JaVale McGee labeling his storage container with baseball hats “BASEBALL HATS” for what ails you. 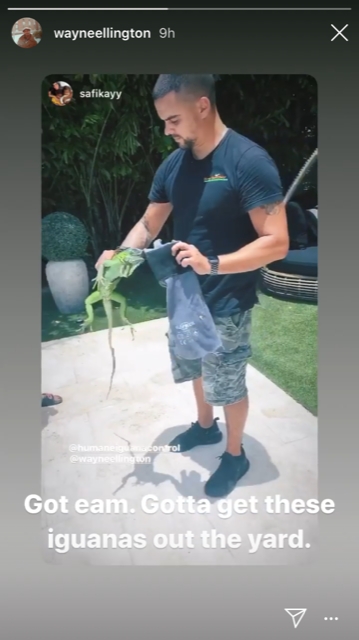 The last few times we’ve checked in on Wayne’s world he’s been tracking the movements of a very large iguana around his backyard. He always kept a respectful distance from it and it, from him. For whatever reason, perhaps because Ellington decided this near mythic creature deserved to live in a real swamp rather than around his pool, he had it removed by professionals this week.

Rating: The lesson? It’s Wayne’s world, you’re just lucky to be an iguana living in it. 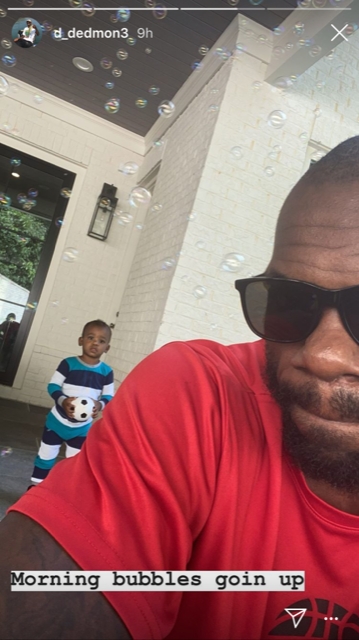 One of the nicest glimpses ISO has given us is of the new routines players are establishing with their families. Dewayne Dedmon here shows the solemnity of morning bubble hour(s) with his young son on the porch.

Rating: The morning bubbles, they must go up. 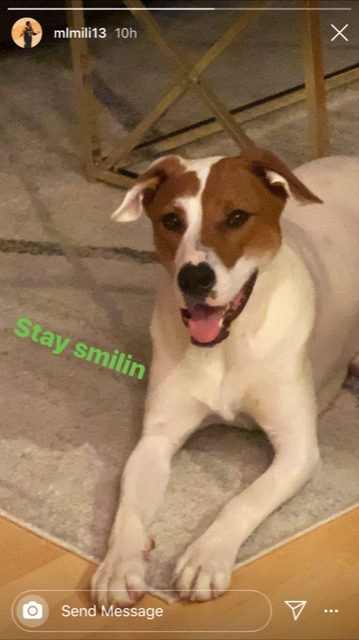 Miller’s dog, North, has a message for you.

Rating: And I have a message for Miller — thank you. 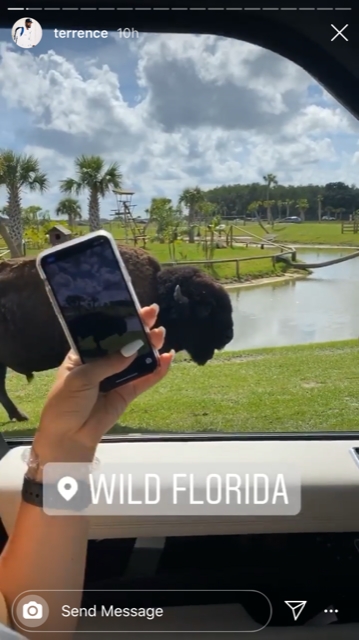 Ross took his family to a drive-thru wildlife park in Florida called Wild Florida. All the animals looked incredibly overheated and bored, and so did Ross.

Rating: There is something soothingly meta, maybe metaphoric for the way in which we engage with our natural world, captured in the photo of a bison as Ross takes a photo of a photo of the bison. 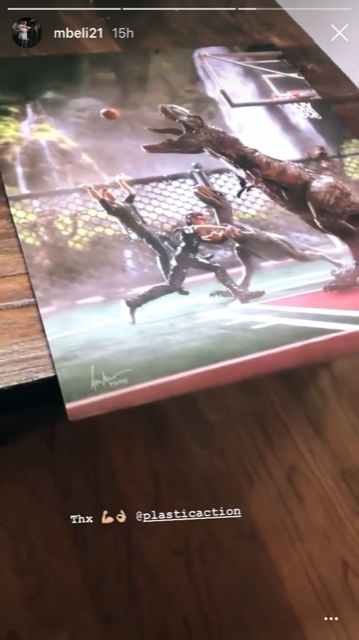 Beli was gifted this uhh, gorgeous work of art. This and the excruciatingly detailed Jurassic Park Lego scene he put together earlier in ISO make me wonder if his heart has not stayed firmly snagged on the tip of a particularly tall, iconic Canadian tower and the city wherein it resides. 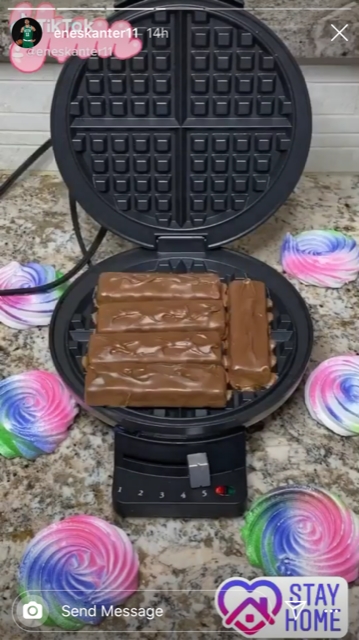 It’s getting to the point where there is less and less need to caption these more than weekly — I just spare you the bulk of them — food exploitations from Kanter than to launch a public inquiry into his waffle iron budget.

Rating: It is not clear if he is actually eating these things or what his casual candy cache looks like. 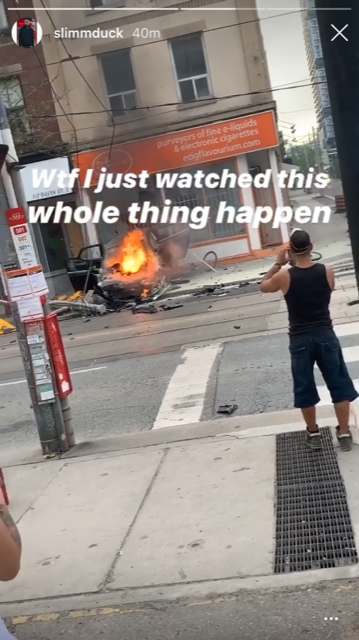 The Slim Duck witnessed a pretty scary accident in Toronto when he was out for a walk this week. Two cars appeared to collide and one continued, running into a storefront and catching fire. There was a cyclist who narrowly escaped the trajectory of the runaway car, jumping clear of their bike as it crashed. Boucher and the biker were ok but understandably shook up.

Rating: Just a gentle PSA that if you drive, don’t treat emptier than normal roads as grounds to be a total freak, there are a lot more people walking and biking out there.

Because Paul Pierce has been lost, apparently, to time itself, we will check in with Chris Bosh this week to get our retired NBA guy enjoying himself fix, a pastime for which Bosh never disappoints. CB4 took a relaxed stroll along some winding, canyon trails with a complimentary sweater tied around his waist to match his cap. He dropped a “dance like nobody’s watching” quote equivalent from Roman emperor Marcus Aurelius and called it a day.

Rating: Another, less attributed Aurelius quote is, “Damn, Bosh is chill as hell.”