Week three and things are getting deep and golden! With Summer League done, most free agency moves sealed, and training camps still a few merciful weeks away, the vacations are coming on strong and we’ve officially entered the sweet spot of summer. It’s like when you’ve got enough of a base tan you don’t worry about burning (put sunscreen on, though), enough of a breeze that heat feels restorative, and just enough sweat on your face so that the glow seems intentional, not gross. It’s a good time, and I’m happy we get to share it.

Who escaped from Old Beach? What NBA franchise is like Old Beach? Who is jet skiing around in the desert? Who loves balloons? Let’s solve these deepest of summer mysteries, and more. 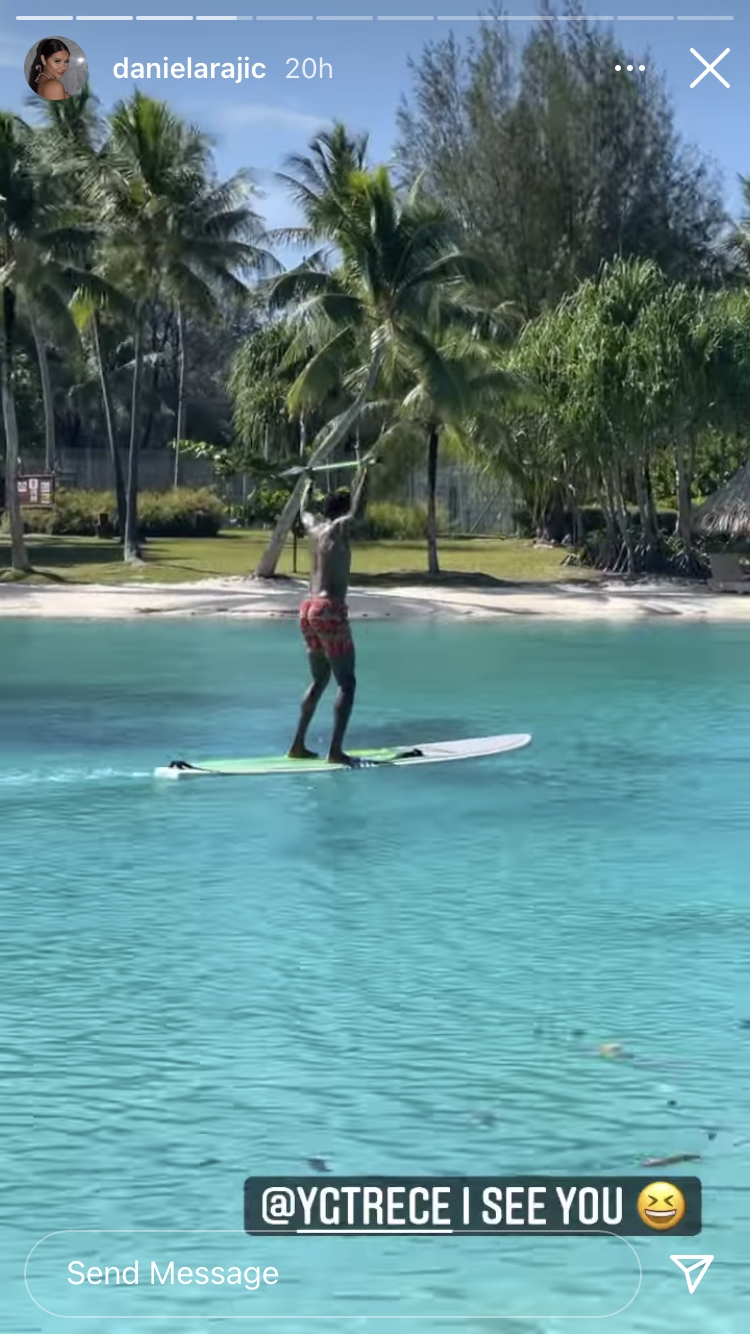 This goes out to all the naysayers who think this guy’s done nothing to push himself out of his comfort zone since he got to Los Angeles. Making clutch shots are one thing, but clutching your fear in the form of a paddle board paddle and lifting it slowly over your head in triumph while maintaining your balance on a very wide board in fairly shallow waters is the stuff next season career records spring from. 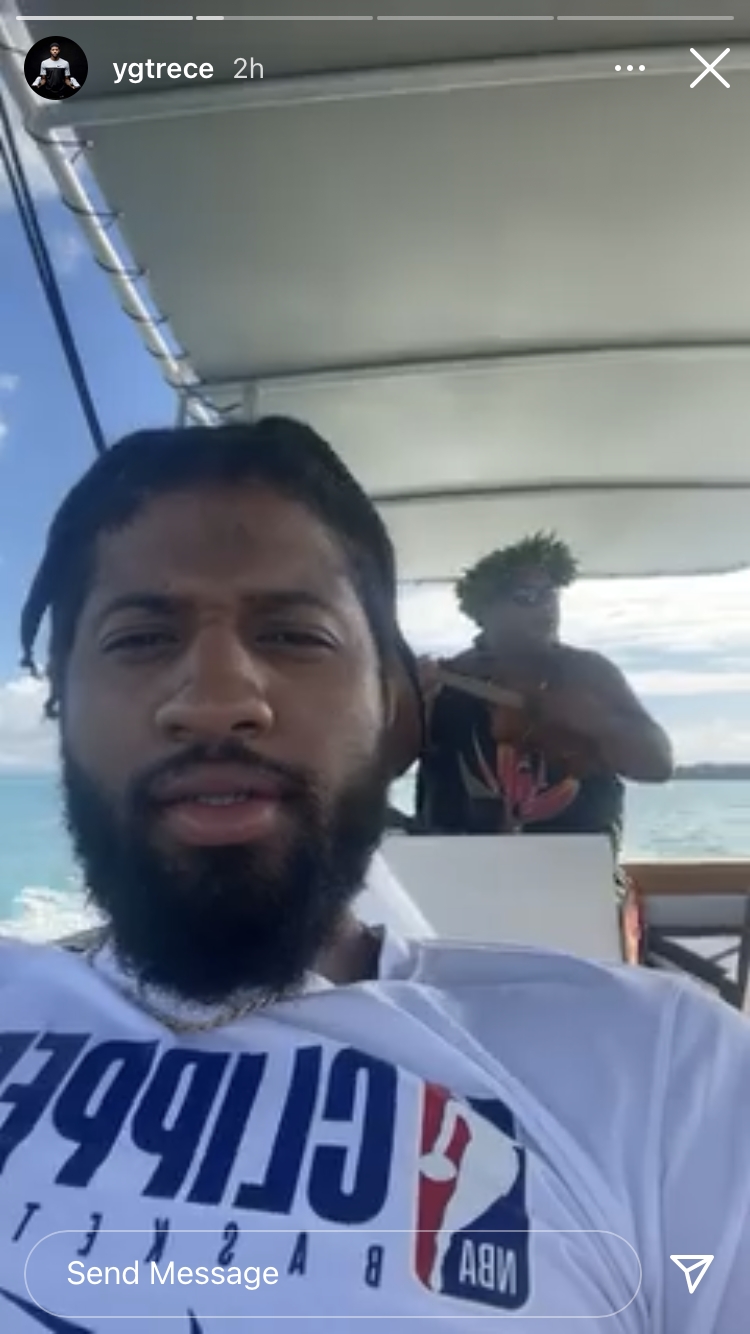 But boppin’ around on the board wasn’t the only thing PG got up to (he also played with his kids on the beach, very cute). He got out on the open water, presumably to pursue one his great passions, wrestling with fish. What’s my stance here at SVW about guys wearing their team gear on vacation? Here for it.

Rating: More and more you are hearing, Paul George and Hemingway have at least one thing in common. 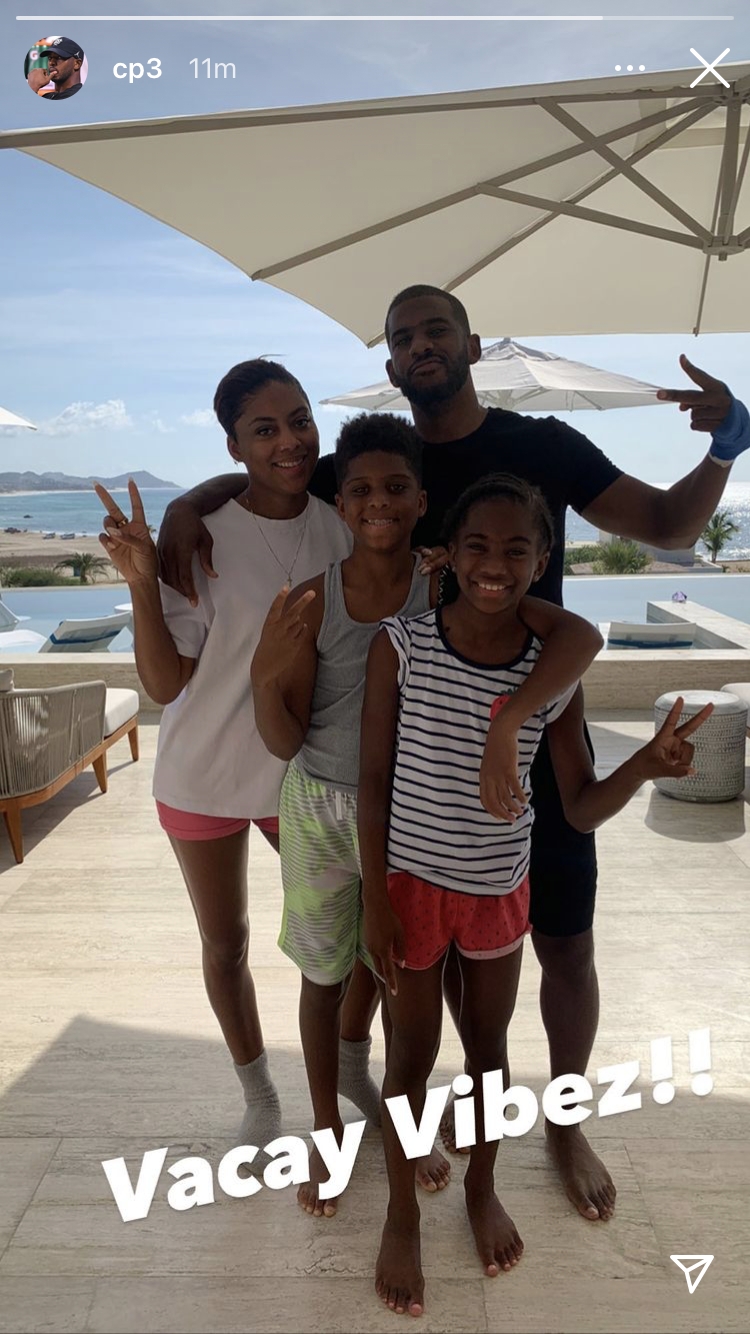 CP3 is on a nice vacation with his family and we are going to give them their space!

Rating: Also no extra curricular vacation photos of CP3 just yet, so.

You kind of have to hand it to how well Dame is handling the undercurrent that’s more like a downed power line sparking menacingly going around the Blazers front office and subsequently, the future plans for the team this offseason. The worse the hazard gets, the more Lillard releases an album, or goes out to the vineyard and nibbles some grapes.

Rating: Kind of, if we’re being honest, the ultimate summer vacation mindset? 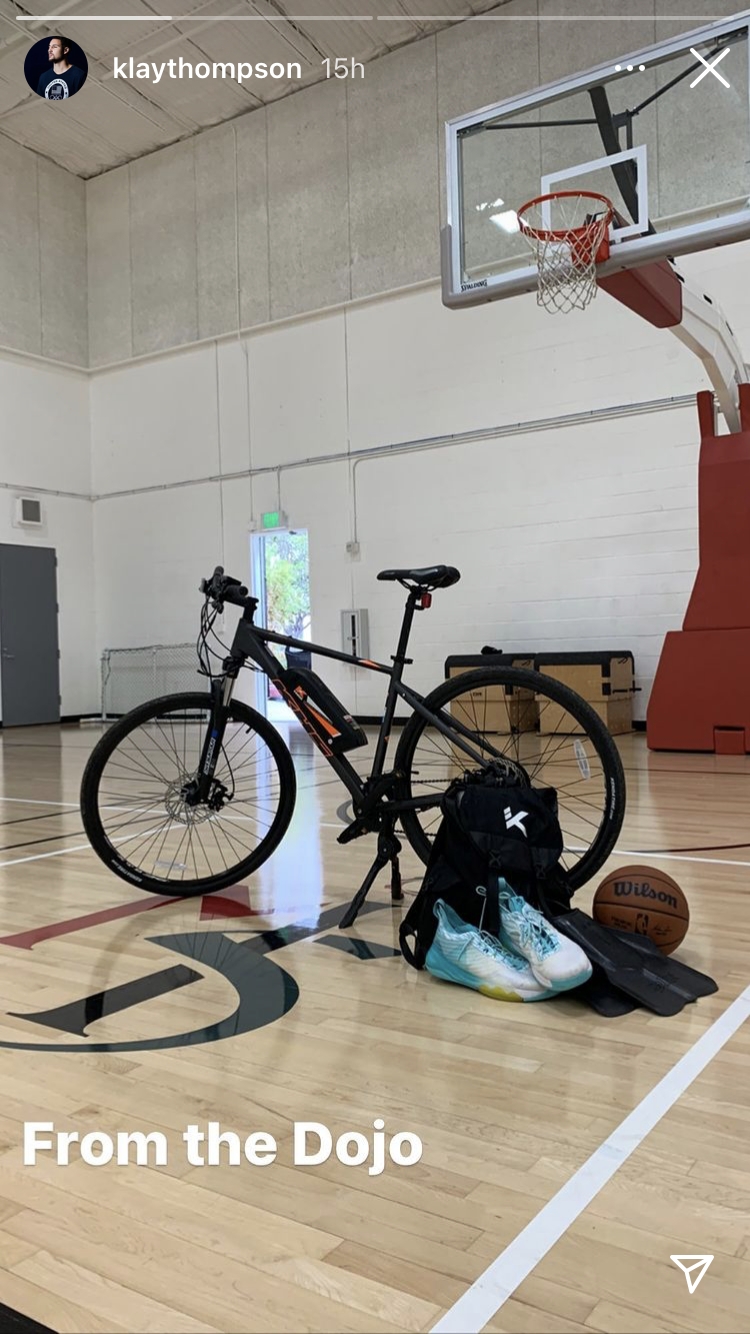 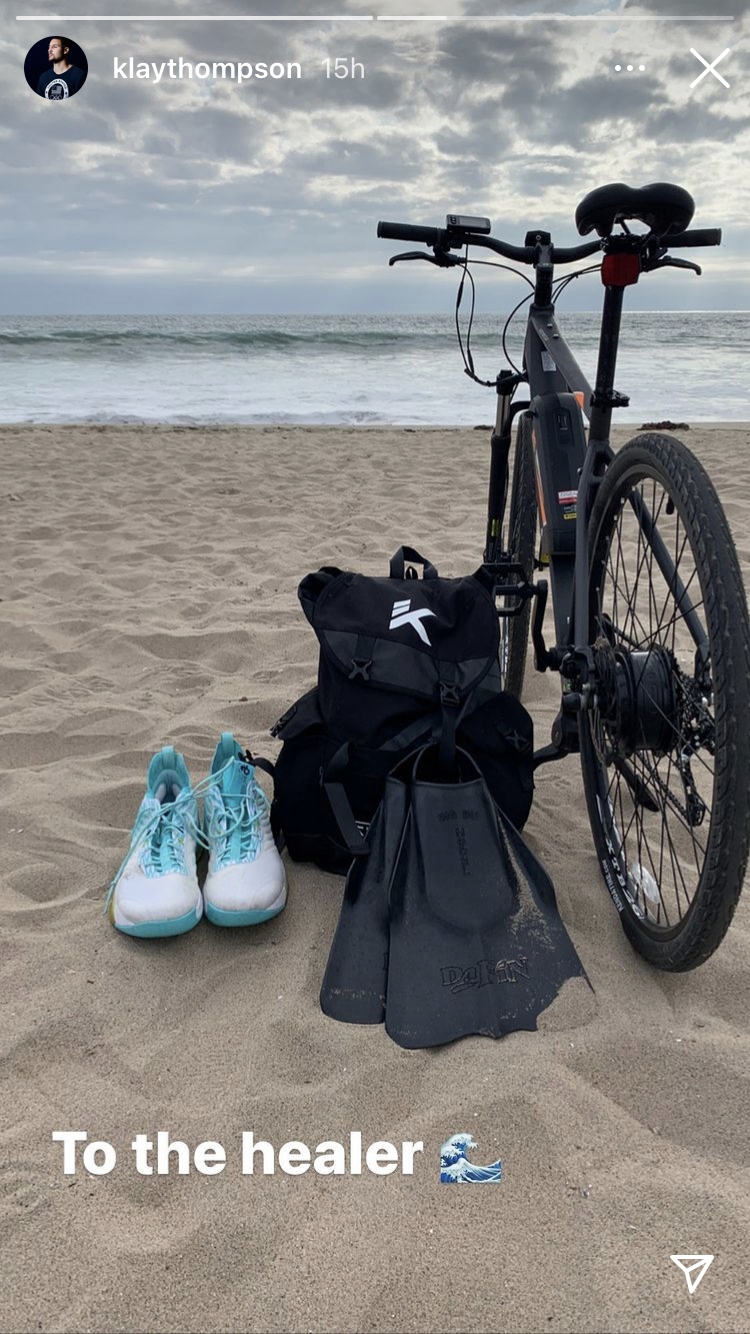 At first, I was a little surprised we already had Klay back here in the sunscreen slick halls of summer vacation, but then I told myself to stop being such a coward. Dream big, summertime dreams! It’s what Klay would and is doing as pictured here, when he goes from the dojo to the healer.

Rating: The healer is the beach, bud.

Here we have LAKE BOi in his natural habitat, happily bobbing with his head just above some mountain wind ruffled waters, breathing in some air sure to be incredibly fresh, while a dog, a champion of PepsiCo, and an American flag — indeed, maybe all of America — look on.

Rating: Do you think Booker has a “To Chill Or Not To Chill, What A Stupid Question” bumper sticker on this boat? I do. 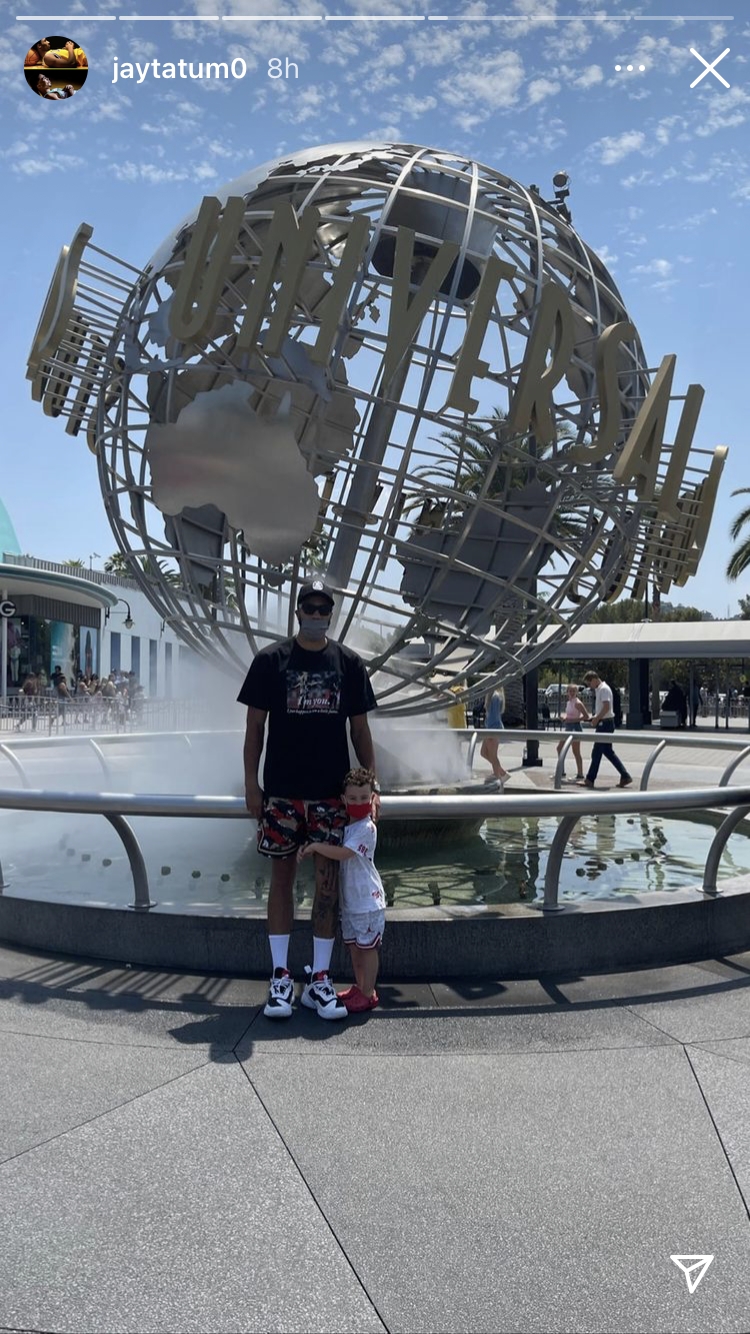 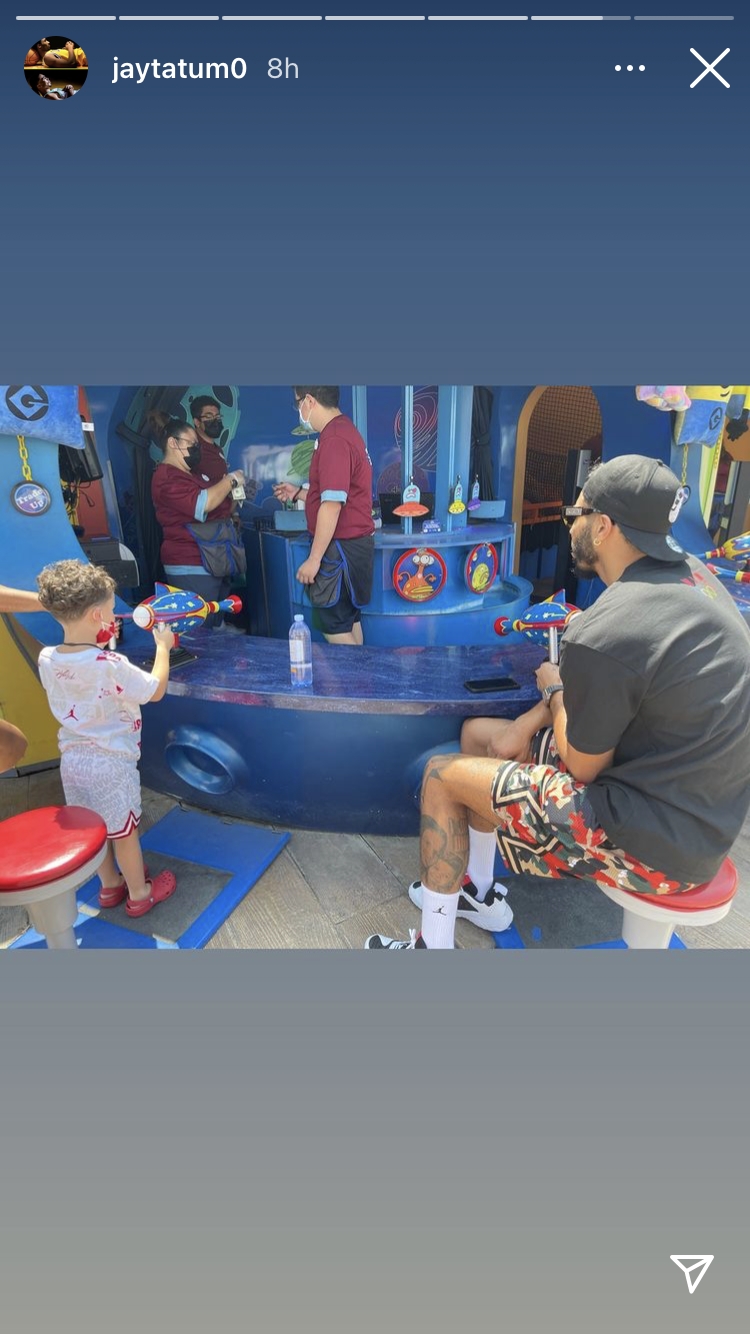 Tatum and his son Deuce (and his very tiny and very cute red Crocs) went to Disney (I think World), hung out by the Universal fountain, and then played the water gun game. The whole afternoon looked nice and Tatum patiently looked on while his son had fun which is more than I can say for myself urging, even through the medium of a long past moment captured in time, this midway worker to get out of the way of that water gun.

Last week saw Rudy set sail for a vacation I promised to get to the bottom of as soon as the geographical makeup of the place got more clear, or the boat Rudy was on veered closer to the very distant shore. This week, I’m still not 100 percent sure! Balearic Islands? Minorca? This man is somewhere in Spain, of that I am confident.

Rating: Rudy may be a three-time DPOY but no one on earth can guard their vacations from me.

Doubling up on Rudys! We love it. Rudy Gay turned 35 and stared so long and lovingly at these mylar balloons that I hope mylar sits up and takes notice because this is a partnership that’s been an eternity in the making.

Rating: Happy birthday, Rudy! I know in my heart those balloons have not deflated yet, like our hopes for the Jazz figuring it out this season. 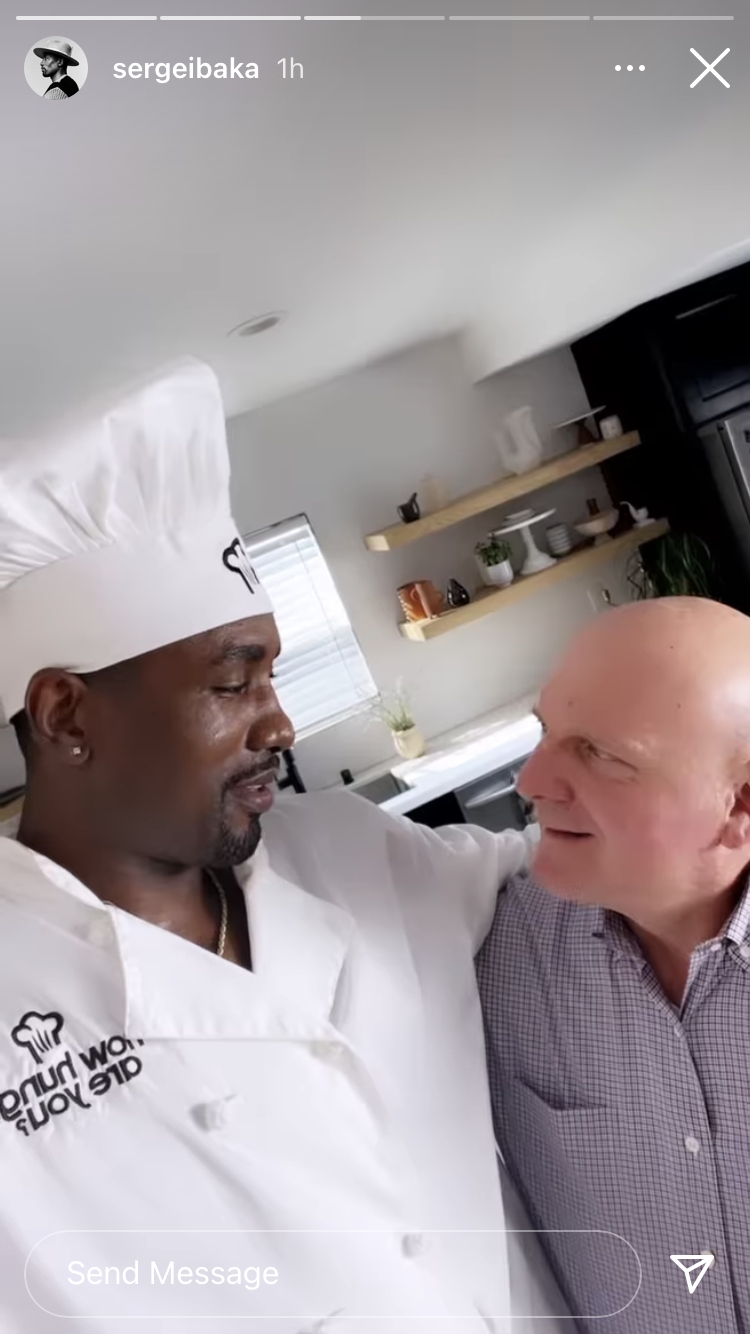 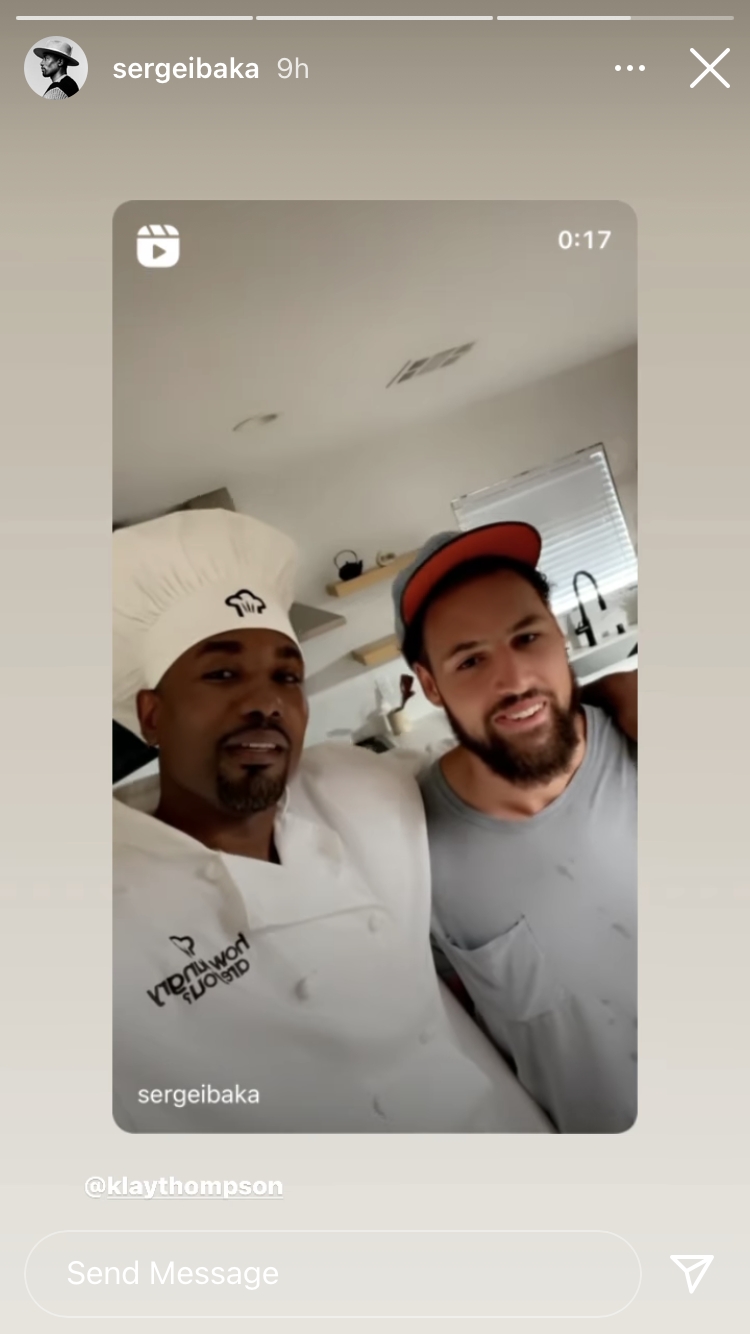 Raptors fans will know intimately the cooking show Ibaka devised during his time in Toronto that hosted such guests as every single one of his teammates and invited them to eat pig’s heads, beef penis, beef testicles, and once, in the case of Kevin Durant, snake. The show was an awkward little marvel where Serge continually asked 21 Question style questions of his guests and deflected terribly and obviously when they would turn the question back on him. It went away for a while, some thought for good, but this week, Serge posted a clip of him in a chef’s hat and Steve Ballmer, who stared lovingly at Serge the whole time, soon followed by a clip and real palate cleanser of him and Klay Thompson. All to say, the show is back, and the long and sprawling days of summer are the perfect time to watch. 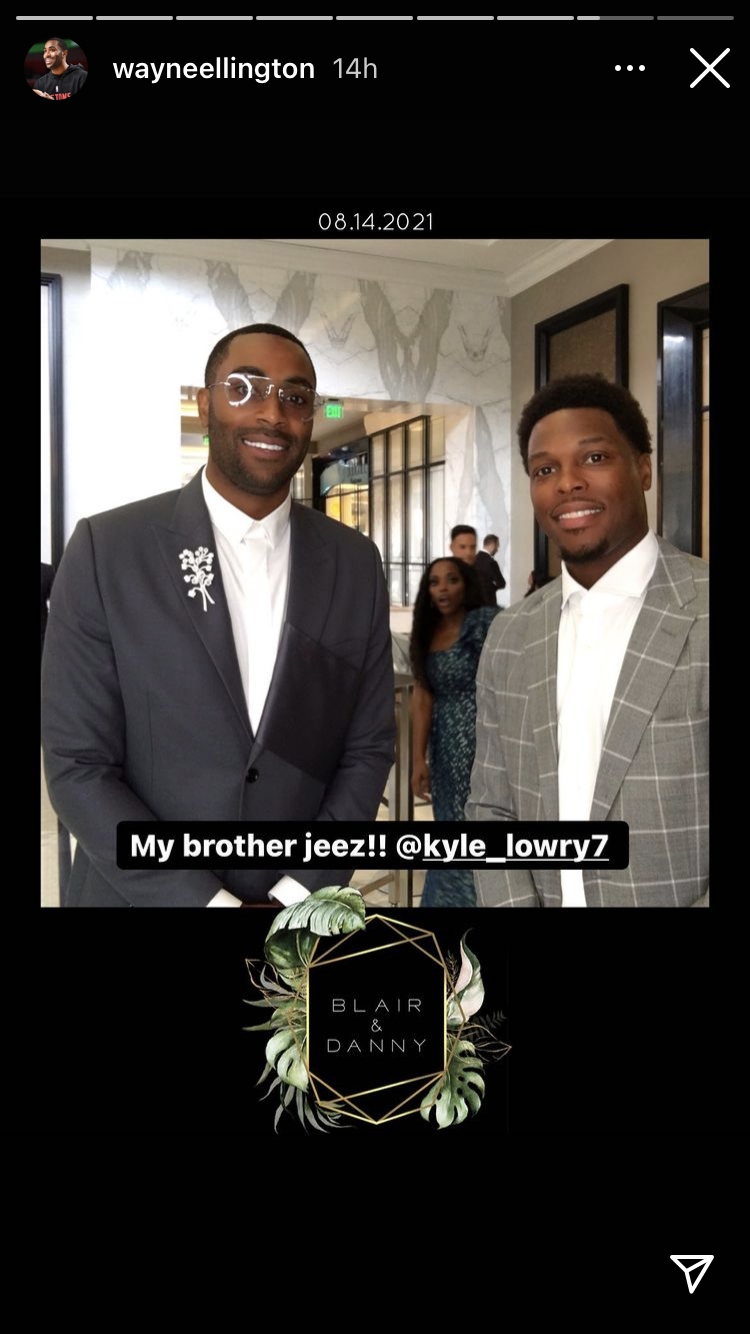 Rating: I guess this should be Danny Green’s entry but also, no.

It was Jordan Clarkson’s time to take his family to Disney, where he rode a lot of rides and looked like he had fun on all of them. The exception was the carousel, where he mostly looked stoic. I can relate to that, because a deep sense of nostalgia and longing and also trying not to focus on too many faces whipping past to not get sick and not feel the fleetingness of life is also my default mode on those things.

Zach LaVine went to Old Beach. Jk, he went on a nice beach vacation with his gf, Hunter Mar, to seems like Cabo. They even rode around on some dune buggies which, come to think of it, probably would’ve come in handy to rip right out of Old Beach.

Rating: But isn’t the Bulls franchise kind of like the NBA’s own Old Beach, if you think about it? 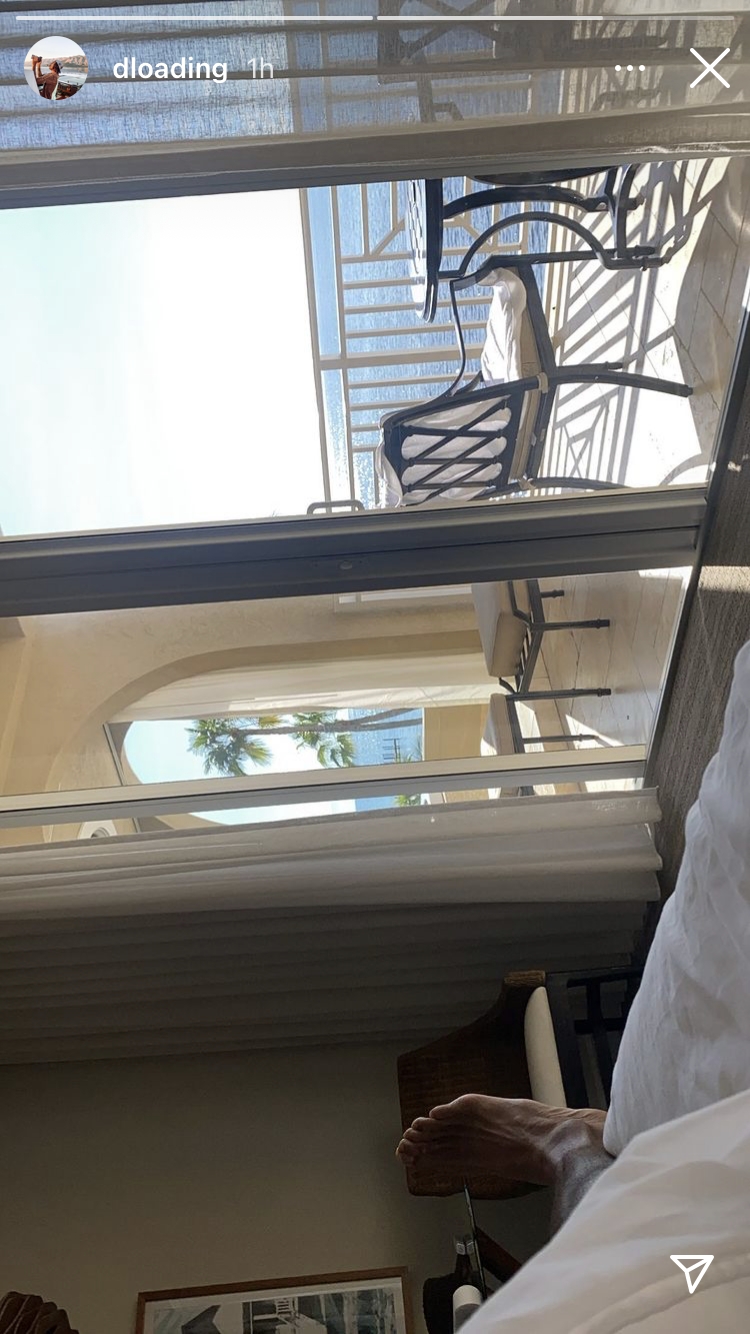 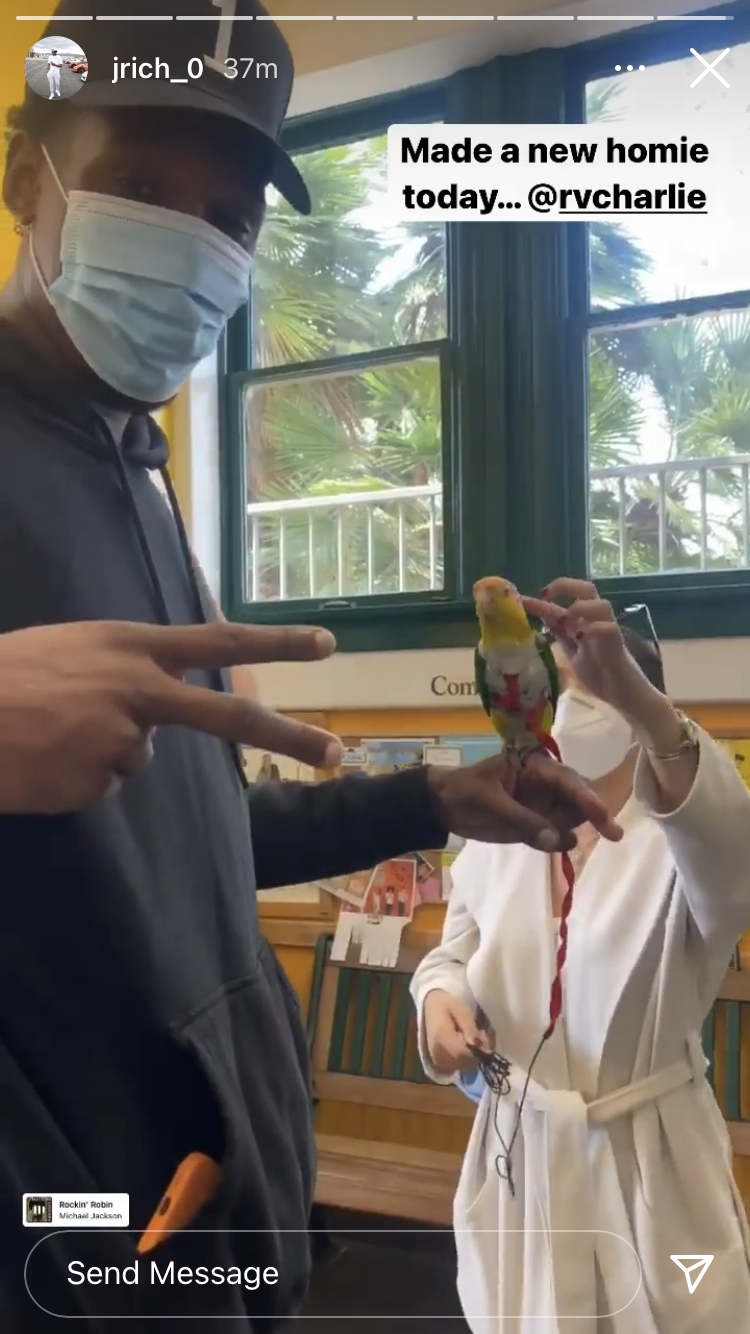 Josh Richardson made a new and powerful friend.

Rating: Watch your ass, Payton Pritchard, this is Josh’s friend.

The age old quandary of SVW continues — if Buddy Hield goes home for the summer, does it still count as a vacation? The arbiters have traditionally been, does it make you feel jealous? Does he appear to be relaxing? Is he pulling off a fit of both outsized chill and seasonal perfection? Is he holding a drink? Are there loungers, recliners, or daybeds in sight?

Rating: I’m not going to keep prompting you because the answer is yes!! 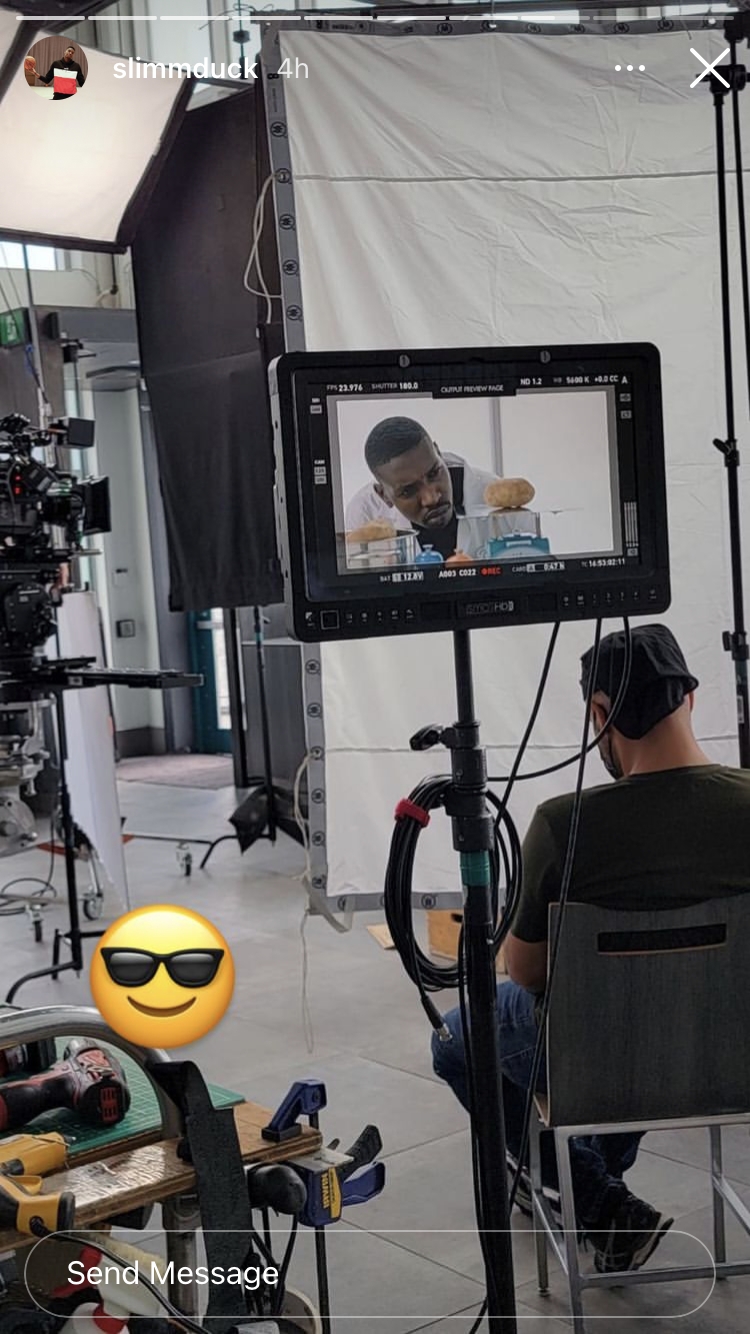 Looks like Boucher filmed a gripping short for the illustrious Toronto Film Festival about a potato.

Rating: And Goran Dragic said he had HIGHER ambitions? 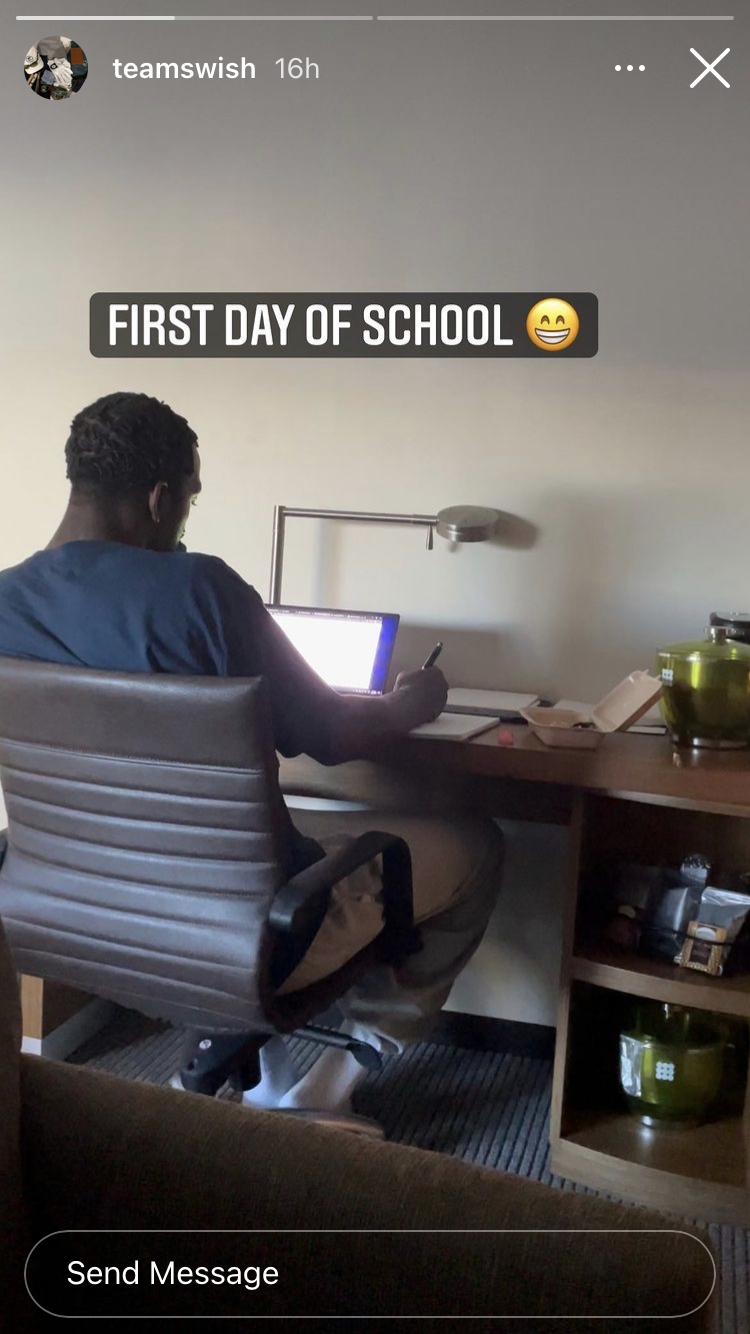 Yeah, I know summer school was always a drag but JR Smith is singlehandedly changing all that and it’s the only academic decathlon that’s ever mattered. 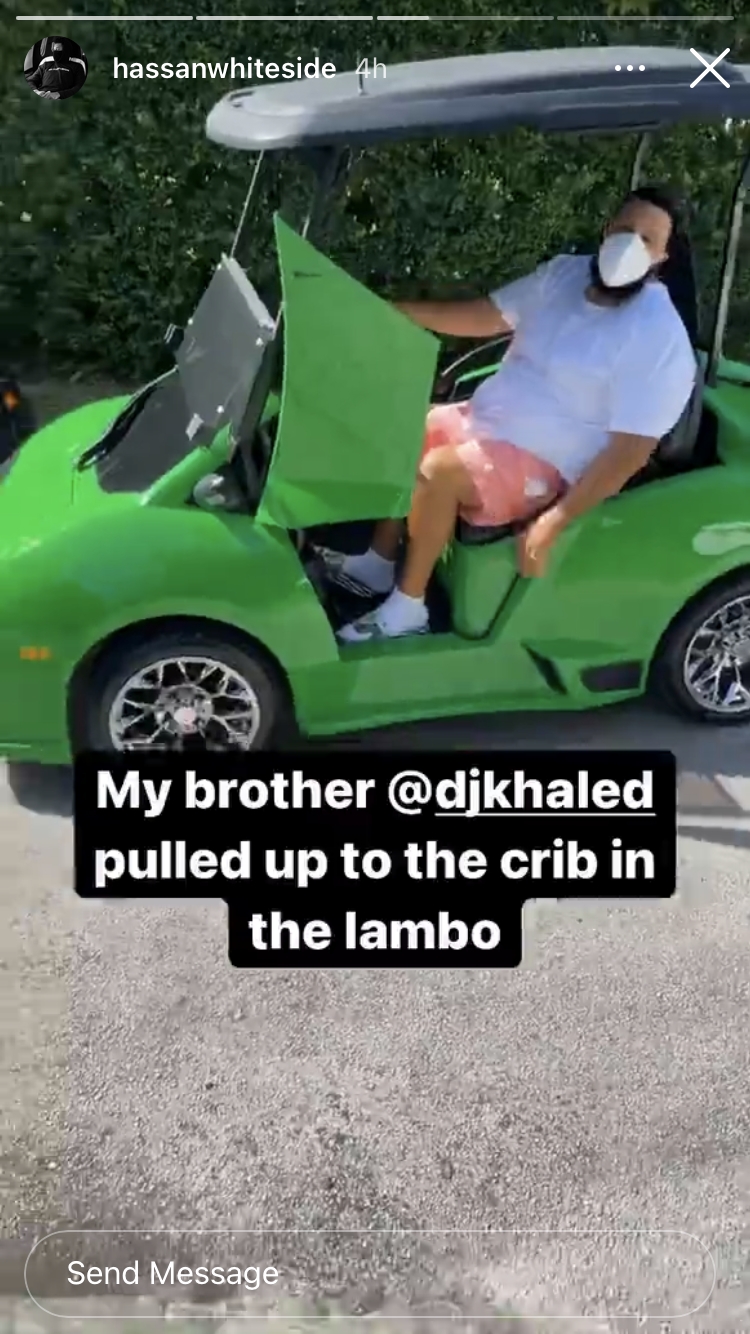 I say this as sincerely as I can through the vehicle of an overly self-serious column about the summer vacations of NBA players, but if somebody made a Real World style show about DJ Khaled and Hassan Whiteside driving around in this little Lamborghini golf cart, there would be no form of television, media, really no form of art left in this world that was not rendered totally and completely obsolete. They’d be burning the Louvre down by midnight.

Rating: So, maybe for the best. 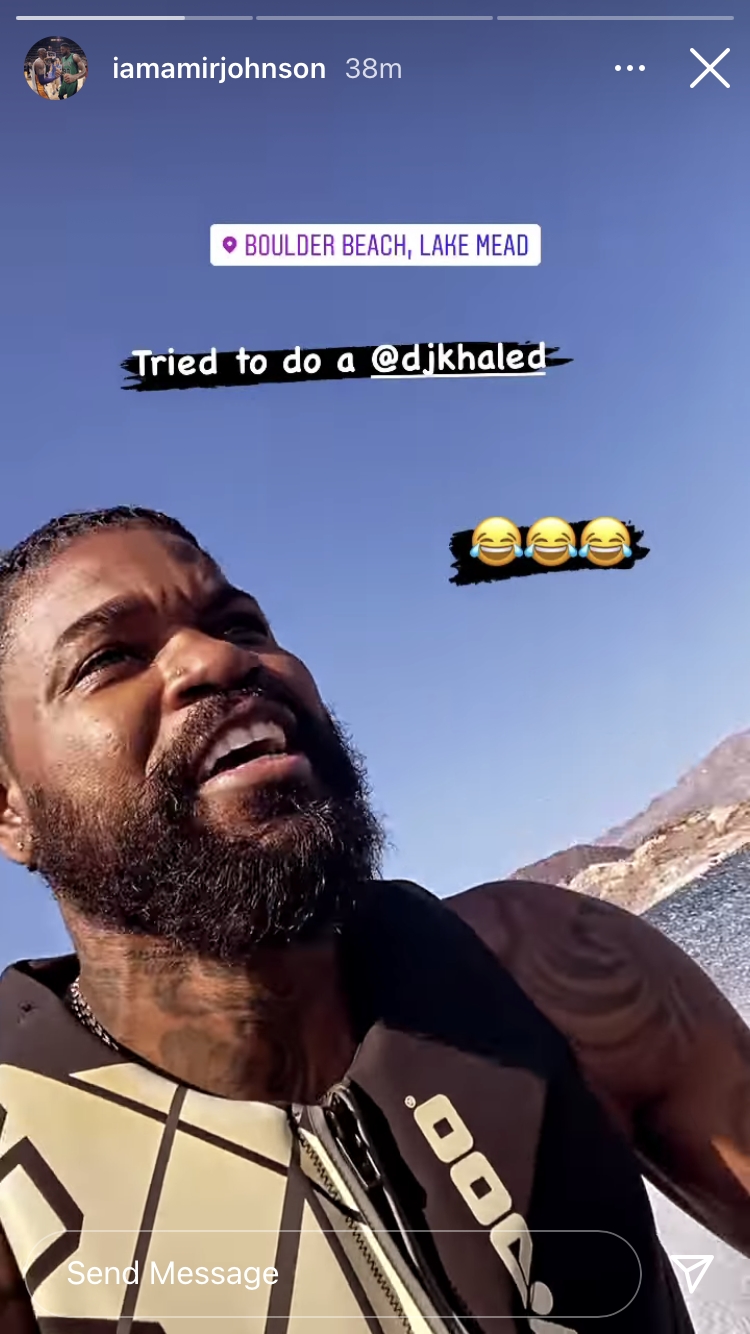 Here’s the entire world’s sweetheart, Amir Johnson, ripping around on a jet ski on Lake Mead. My and your guy is happy, safe (life jacket), and sans a single care, making fun of the aforementioned DJ Khaled because Amir probably understands the only way to keep that man’s power from overtaking the entire universe is to gently knock him down a peg every now and then.

Rating: Sorry if finding out angels can operate high speed water vehicles has given you some conflicting feelings about your faith. 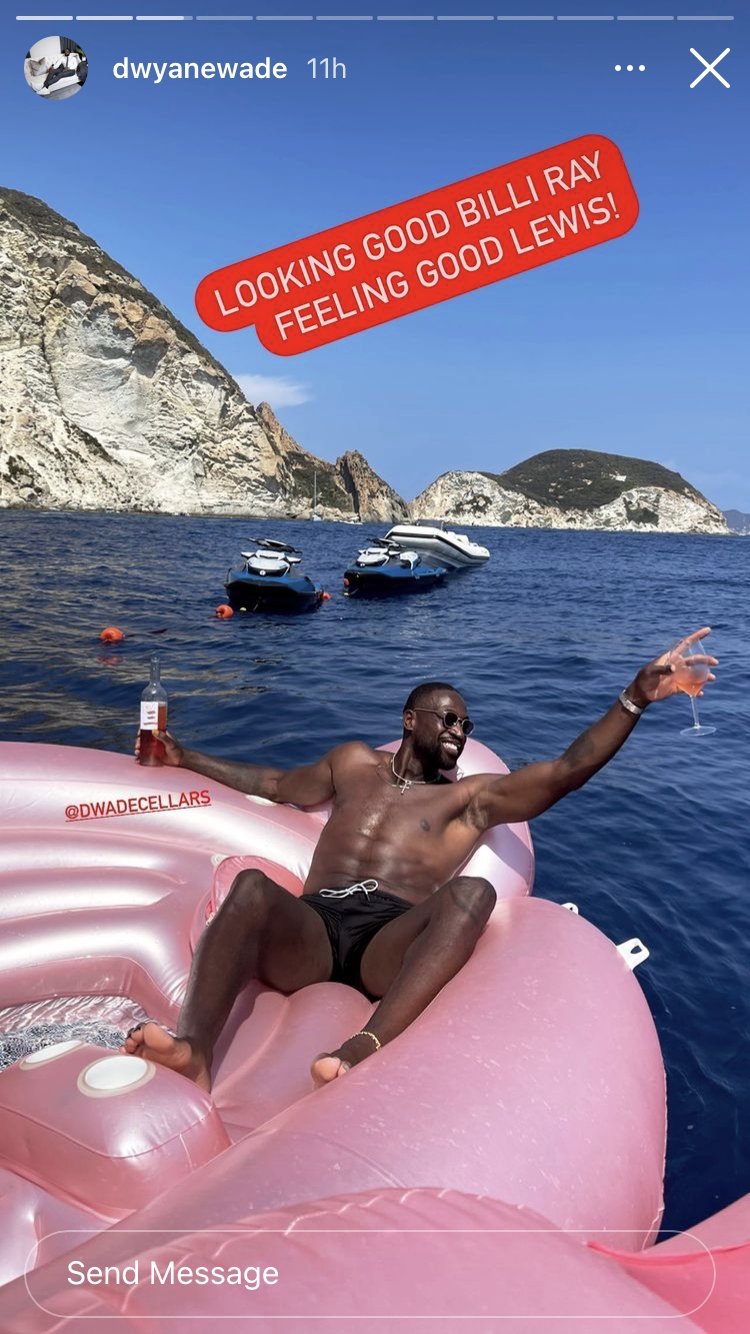 It really doesn’t matter how many years removed D-Wade gets from the NBA, there will always be a place for him here, all along the sunny watchtower. The man is on a giant pearlescent pink water inflatable in Italy, hoisting a glass of rose to cheers the rest of us poor slobs stuck sitting in front of a fan on blast, wondering if another trip to the public pool will constitute a Summer Friday well spent.

Rating: And then, once he finishes that glass, he’s got the whole bottle there to go and do it again.