‘You Better Get Your Butt Out There’: Reggie Miller Says Playoff Injuries Are No Excuse

Injuries have become as much a part of the playoff narrative as individual matchups and a team’s psyche. A grueling regular season schedule and an extended playoff run to the Conference Finals adds more than your usual amount of wear and tear to an NBA player’s body. But during a conference call with Reggie Miller and Chris Webber this morning, before they call Game 1 of the Eastern Conference Finals with Marv Albert tomorrow night on ESPN, Reggie made it clear: If it’s the playoffs, “you have to play hurt.”

That’s exactly what Kyrie Irving will have to do for the Cavs tomorrow night. The brilliant young point guard has been battling left knee tendinitis and and a strained right foot since the first round, which made him doubtful for tomorrow’s Game 1 after sitting out the second half in Cleveland’s closeout game over Chicago and the ensuing Saturday practice. But he’s starting Game 1, and Reggie and Chris both made it clear to us you don’t sit out games when it’s playoff time.

Still, we wonder how effective Kyrie will be when he’s out there. It’s clear he’s not the same guy who scored 55 points and 57 points this regular season, both career highs at the time. Or the guy who torched Boston early in Cleveland’s opening-round win over the Celtics. But, as Webber astutely notes, Kyrie is a multi-faceted threat on the offensive end, which makes him “more of a luxury than some other players that are maybe one or two dimensional.”

“I think with a guy like Kyrie Irving,” Webber said, “he’s unique in the fact he can catch-and-shoot, he can shoot off of the dribble, he can post up, he can drive.

“Put him in a corner, he’s just as effective. He doesn’t need to dribble to get a shot. You can put him in a pick-and-roll, let him be a decoy, one hard dribble and he can find someone. So, even though he’s hurt, I expect him to find ways to fit in because his skill-set allows him to play point guard, two-guard and even a small three at times if they go with a more penetrating lineup; his presence just spaces the floor.”

As for that decoy part, Reggie agrees. While Miller’s rambling response to our question about players “evaluating” whether they can suit up or not — weighing the long-term career effects when playing with an injury versus the short-term benefits of helping your team win a playoff game — was met with a bit of a scoff, Reggie always thought his presence justified being on the floor, even if he wasn’t totally healthy.

“Me at 70 percent was better than a lot of two-guards at 100 percent,” Reggie humbly informed us. “I will always bet on my right arm. Even when I’m out there I can be a decoy because I knew they were never going to leave me [alone] from behind the arc. So, I’m helping my team in some kind of way.”

Except, Kyrie also has to defend, something he struggled to do earlier in his career even at 100 percent. He’ll need to defend at a higher level if the Cavs hope to fulfill any championship aspirations. The man opposite Kyrie in the Conference Finals is an All-Star, too. While Jeff Teague went through his own injury issues at the start of the Eastern Conference Semifinal against Washington, he also matched up against John Wall – who played with five displaced fractures in his left hand for the final two games of the series.

“If I’m Jeff Teague, I’m saying to myself, ‘I’m going right at this kid. I’m attacking from the jump,'” Reggie tells us.

“I mean, yeah, it’s a part of the game,” Reggie adds. “[The Hawks] gotta be able to use that. Don’t be surprised if the Atlanta Hawks and the guards, [Denis] Shröder and Teague, go right at Kyrie Irving.”

The NBA Playoffs are no time for charity. Webber — who only ever sat out a playoff game after suffering a devastating knee injury (he would eventually need microfracture surgery and was never really the same after that) in Game 2 of the 2003 Western Conference Semifinals — said, “You feel bad [for] everyone with injuries,” he also quickly followed up by adding, “I don’t feel bad for anyone because we know it can affect any team at any time.” 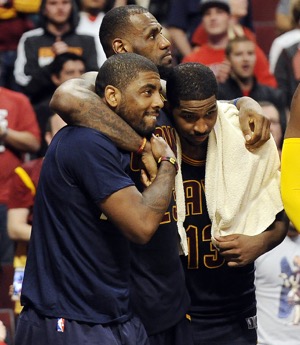 We saw it with Chris Paul in the second of half of L.A.’s Game 7 win over the Spurs when he played on a strained hamstring that knocked him out of the first two games of the Western Conference Semifinals. We saw it with Wall against Atlanta. We saw it with Kyrie against Chicago, and LeBron James when he badly twisted his ankle at the end of Game 4 in Chicago before coming back to hit the game-winning shot. LeBron then came back a day later to dominate the Bulls back in Cleveland during a Game 5 win to take control of the series.

We’ll see it again when Irving faces Atlanta for the first game of the Conference Finals tomorrow night. We’re liable to see it a few more times as the remaining Final Four duke it out to be named the 2015 NBA Champion, too. Injuries come with the well-worn territory this late in the season. There’s no time for players to rest the weary NBA body now, but push beyond whatever ails them.

While Webber only ever missed a playoff game with a career-threatening knee injury, Miller, he of the blustery comments above, fractured his eye socket on April 13, 1996. He didn’t play again until the postseason. Yes, he sat out the first four games of Indiana’s opening-round series, but he was on the court in Game 5 of Indiana’s first-round series against the Hawks sporting a pair of Horace Grant-style goggles. This was back before the first-round was changed to a seven-game format in 2003, so Game 5 was the deciding contest of the series. Reggie wasn’t going to miss it, even if it meant donning uncomfortable eyewear so he could play.

He ended up scoring a team-high 29 points in the effort, including 13-of-15 from the free throw line. Such proficiency at the stripe goes to show that he wasn’t coasting on the perimeter all game, but instead attacking the basket. Despite scoring 16 of his 29 points in the final session, including his team’s final eight points, Indiana fell 89-87 with Reggie taking a potential game-winning three-pointer while met by a double-team at the arc. The shot ricocheted off the rim as the buzzer sounded, and his Pacers lost.

After the game, Reggie was just as humble as he was in our chat, saying, “I’m not Superman, even though people perceive me to be that way.”

While we wanted to find evidence of Reggie taking a playoff game off during his career for something slighter than a fractured eye socket, that game doesn’t exist. The dude came to play when it mattered most. And while his answers in our conference call could come off for some as macho posing, it’s how he actually played. There was nothing he loved more than the “different beast” that is the playoffs.

You might find Miller’s voice grating on TNT telecasts, and you might hate that he can utter some ridiculous comments during games. You might think he’s wrong a lot of the time — we certainly do — and that he should probably stay off social media altogether, too.

But Reggie is right when it comes to playoff basketball.

“Playoffs, you have to play hurt,” he said. “I don’t care. Everyone’s banged up this time of year. You better get your butt out there and play.”