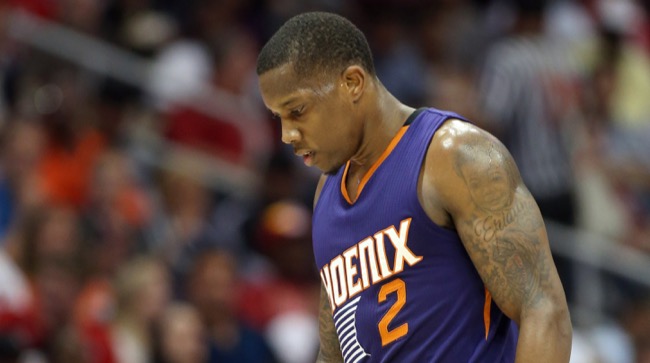 As summer begins it always seems the NBA offseason begins heats up with a mix of craziness (see: Sacramento Kings) and endless speculation. Although the 2015 NBA Draft didn’t turn out to be as unpredictable as many suggested, one non-Boogie Cousins rumor stuck out: The Phoenix Suns offering guard Eric Bledsoe and their thirteenth pick to the Knicks for the fourth overall pick.

However, according to Suns GM Ryan McDonough, neither that trade nor any trade involving Bledsoe will be happening anytime soon.

“Eric Bledsoe is still a young player, in his mid-20s,” McDonough said. He’s gotten better every year he’s been in the NBA… So it would take a whole lot for us to move Eric Bledsoe, and that’s something we haven’t even considered. It hasn’t been discussed.”

Bledsoe averaged 17 points, 6.1 assists, 5.2 rebounds and 1.6 steals while starting all 82 games in what was his best season as a pro. Last season only LeBron James, Russell Westbrook, and James Harden averaged those numbers. And Bledsoe remains one the best defenders at his position in the league. He is also locked into a cap-friendly contract, which will only become even better once the cap rises dramatically after next season.

And yet the Suns might be wise to see what they can get for their blossoming young guard.

Bledsoe is a good player, but it remains to be seen if he is a franchise player capable of being the lead guy on a championship contending team. He’s been injury prone throughout his career, and while his numbers were career highs last season, it wasn’t enough to get the team into the playoffs. He also happens to have a similar playing style to his back-court mate Brandon Knight, who’s a restricted free agent this offseason.

The Suns most likely won’t be making the playoffs next season, especially in an even tougher Western Conference than last year. Although the team is constantly mentioned as a dark horse contender for free agents, the team hasn’t landed a marquee free agent since Steve Nash years ago. So, if McDonough gets a great offer for Bledsoe he should think long and hard about pulling the trigger. Maybe McDonough can make up for the Brandon Knight trade and get back the Lakers’ 2016 1st-round pick from the Philadelphia 76ers. The Sixers need a point guard to pass the ball to their numerous big men and to make their team somewhat watchable to their long-suffering fans.

The Suns organization under McDonough isn’t afraid to make bold moves like when the team signed Isiah Thomas Jr. last summer when the team already had Goran Dragic and Bledsoe. That ended up being a disaster, ending with both Dragic and Thomas Jr. being traded.