Social media gets exhausting. Instagram specifically. It’s just a lot to stay on top of. Over time, the algorithm matches your feed to things you “like” while helping you discover new riffs on the same themes. That can be great. If you like 1960’s muscle cars, you’ll see lots of them. If fishing is your thing, it’s easy to find your people. If sexy travelers are what you prefer, you’ll be very happy on Instagram.

But what if all of a sudden you decide you want a breath of fresh air? Imagine one day you want to see alternative process photography or a new perspective on adventure, then what?

With these thoughts in mind, we’ve compiled a list of 11 accounts that haven’t hit the mainstream. Yet. They’re all unique enough to flip the script a little, to remind you that there is fresh stuff out there. These accounts all have less than 10K followers and will, at the very least, give you back that sense of uncovering something new.

Nothing about his feed is showy or careless but the images put you at ease. It’s not grand or boisterous and that’s a welcomed change of pace in this shock-value laden world. His imagery is lighthearted but calculated. It’s balanced and comfortable without feeling formulaic. You may have never been to Thailand or Portland, Maine but through Jack’s lens they feel soothingly familiar. You feel like you’ve been to these places before and if you haven’t, you want to be. Not necessarily with Jack Callahan, but certainly like him.

Sinjun Strom is a fashion photographer who looks like she’s having a freaking awesome time. She’s piecing together sets and coming up with fun ideas while showing all of it on her instagram. It’s playful and light but so so cool. Sinjun, keep doing your damn thing.

You know those people who are so talented they make you upset?

Not angry, just…upset. James is one of those people. He’s a part-time photographer who shoots exclusively on film and has such a natural knack for it that it’ll make your heart hurt. In the best, most inspirational way possible, of course. James’s work makes me want to go out and shoot more, not only more but better. If you’re not the photo taking type then his images will make you want to go out and feel something. The conceptual boudoir work (a la Todd Hido) especially. While the images he gets out on the street (which reveal the influences of Lee Freedlander and Margaret Bourke-White) will charge you up to pay attention to the world around and the humor you can see while walking down the street. We may be upset by James and his damn talent, but that doesn’t change the fact that we’re massive fans of his work.

[This entry features the author of this post. It was added by the editor, because the author was too humble. — ed]

Guy, girl, and dog get in van and start driving.

It’s a story you’ve heard before. Jenelle Kappe, Parker Hilton, and Emma Mae live, work, and explore from the road. They set out just over a year ago to “find home” and they’re still rolling. Their journey around the U.S. has since taken detours to Nepal, Japan, Cuba,Canada and Mexico. They set out with the intention to show that the world of travel is one that necessitates togetherness.

Originally, the idea may have been to find home but these days it seems like the journey itself is the important thing. 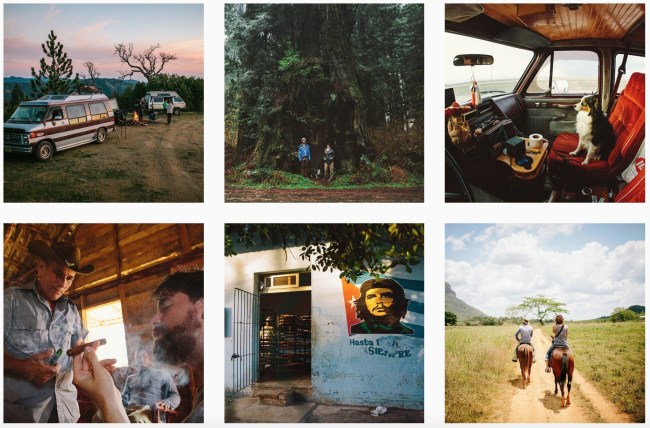 This is surf photography done differently.

Tom Pearsall isn’t just pointing and shooting. He’s thinking about form, composition, and timing. Sure, the surfing is impressive, but that’s not why you follow him. You follow him because the colors and lighting are on point and because you’ll think of surf photography a little different after checking out his work. It’s easy for surf photographers to perpetually push a stagnant aesthetic, it’s an aesthetic that works but it rarely gets a breath of fresh air. Pearsall is changing things up a bit.

Went for a cheeky paddle at 'south sides' just south of Mainbreak whilst in my break working at the #margaretriverpro. Got a view of more than I bargained for! 📷: @justin.majeks from @surfing_wa .

This is weird. Which is awesome.

On this list there are people mentioned who are here to push you. All in their own unique way, but together they push in the same general direction: Into the frontier. Some offer a delicate nudge toward understated innovation, while Kayla Bedey is a charging elephant headed toward uninhibited inventiveness.

Having learned specific alternative processes of photography from the mother of such things, Christina Z Anderson, Kayla has darted off to create, tirelessly. Instagram does not do her work justice but it is a way to get it out there. Kayla is primarily working with original imagery and an early 19th century printing process which has been adapted with modern techniques, called tricolor gum-bichromate. It’s a painstaking, tedious, and an immeasurably fun process. If shooting on film is hipster-y and niche, gum printing is in a league entirely on it’s own. Kayla has embraced a printing form few know about and is doing it in a way that shouldn’t be ignored.

John’s feed is what you wish your friends were posting.

From one half of the creative team behind Hate Male Comedy comes a feed that is pretty, inspiring, and a ton of fun — full of well balanced fashion shoots and lifestyle shots that invite you to pick up the pace and photograph your life more. If only to remember the things and people that you hold dear. 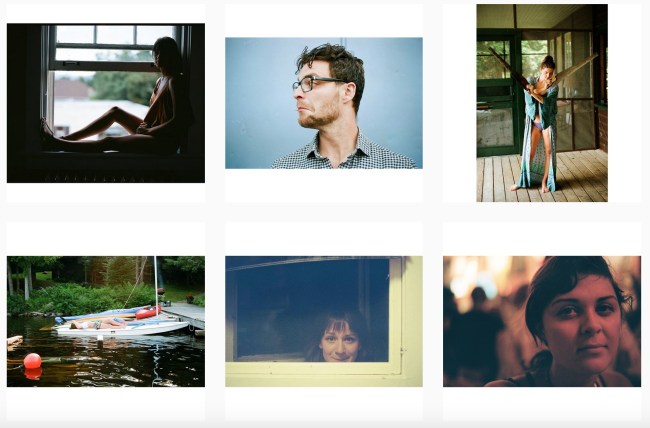 Olivia is cooler than you.

It’s really as simple as that. Her eye, her aesthetic, her process. It’s fucking cool. I imagine that Olivia Mcmanus has kicked it with Alex Praeger, taked a detour through a LaChapelle set, rolled around in the year 1972, and eventually decided to come back to 2016 to show us what her world looks like. The settings and color choices are unique and you never know exactly what the next image from her will be. You thought you knew what sexy was? You thought you understood “cool”? Olivia is here to remind us how far off we all are.

live by the sun, in a city that still sleeps. thank you Sydney for being so beautiful 💕 @hotelpalisade x @livefast_mag 💕 read more through link in bio.

Let’s experience the world. Let’s travel. Lets feel. Let’s embrace a life worth living. If we’re lucky, lets do what Tegan Butler is doing. Run through the hills naked because why the fuck not? Sleep in and lounge on the beach. Why shouldn’t you? Go on road trips and document the hell out of the experience. This girl is living a live we can all glean something from.

when I was a little girl, I thought paradise was a real place. I begged my mum to tell me where it was, to show me on the map, so we could go one day. she would tell me it wasn't any particular place, that it could be anywhere I wanted. I didn't really grasp that as a concept then, and maybe as I have grown, I still haven't. on a constant search for the new and exciting, it is possible that paradise is something I have already found.

mandatory for first day of spring 🌸

There is a look to the work of certain photogs that is just clean and pleasant and…Australian. Patrick’s work is showcasing the perpetual summer we all wish we could have. He punctuates his feed with the occasional creative, fashion-forward image — reminding us that there’s more to this kid than we once thought. He can bang out beautiful imagery but he’s a multifaceted dude. Every so often an image will trickle out that makes you want to hit the drawing board all over.

When you can see someone expressing themselves genuinely the work just looks…different. You know? You can see that they had a plan and they executed it with purpose. Madison is one of those people. The self described “tumbleweed” has been traveling on and off for the last couple years as part of the @Vanajeros team, but it’s her photo-paintings that really open the door for innovation. When you look at Madison’s feed, you’re seeing the world through the eyes of someone with a unique vision. 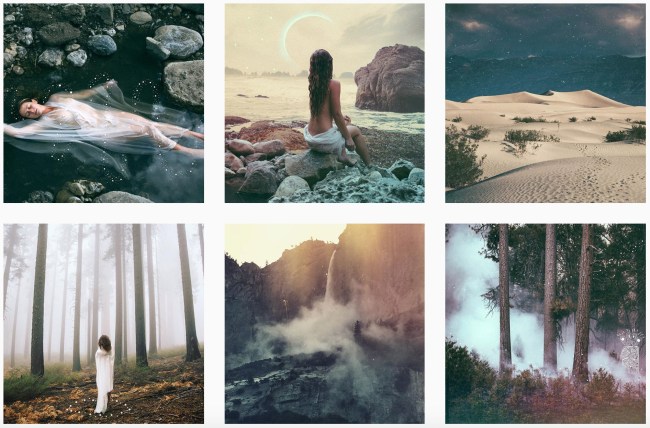